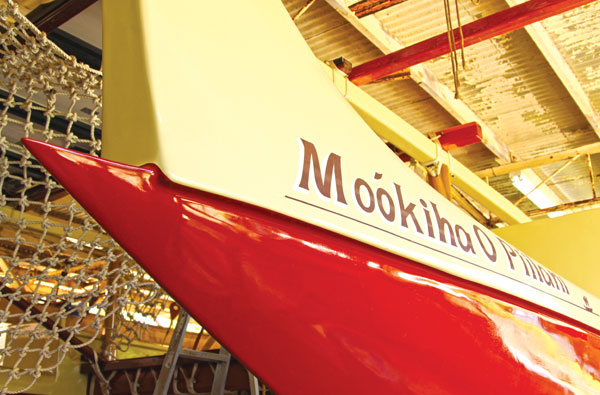 On December 21 — the winter solstice — Mo‘okiha O Pi‘ilani will sail from Mala Wharf on her maiden voyage, testing vessel and crew in the waters off Lahaina for future long-distance journeys.

That launch has been a long time coming, and still faces formidable challenges. As I write this, the canoe’s twin fiberglass hulls hunker inside a hangar at Kamehameha Iki Park; her masts and spars lie nearby, waiting to be set into the broad wooden deck. After nearly two decades of fits and starts, changes in concept, construction and leadership, it will take another $50,000 to get the canoe into the water.

Those who intend to be aboard, come December, have no doubt she will sail.

Among them is Kala Baybayan, who will be the canoe’s navigator. In Mo‘okiha she sees not an inanimate object, but a living creature.

“Can you imagine a honu, a sea turtle, that has been tied to a tree for seventeen years? It can see the ocean, smell the ocean, belongs in the ocean, but hasn’t been there.”

At age thirty, Baybayan is part of the second generation of Hawaiians who have made voyaging canoes the vessels for bringing traditional culture back from near-oblivion. Kala learned wayfinding from her father, Chad Kalepa Baybayan, navigator-in-residence at the Big Island’s Imiloa Astronomy Center. He learned from Nainoa Thompson, first navigator of the Hokule‘a, the double-hulled voyaging canoe that inspired the Hawaiian cultural renaissance of the 1970s.

“My dad would be gone for months, and come back looking like a stranger,” says Kala, “dark, big hair, a beard. I learned to sail to get to know him, to understand what he loved about it.” 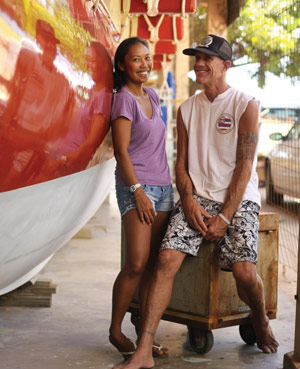 In 2007, Kala joined her father on the Hokule‘a, sailing with him around the Islands. “I looked over and saw a pod of dolphins swimming in our wake.” Her hands mime blinders being removed. “Voyaging on a canoe opened my eyes to my connection to everything.”

As education director for Hui O Wa‘a Kaulua, the nonprofit organization behind Mo‘okiha,
Kala sees the canoe as “a living classroom, a way to connect to our ancestors.” Youngsters by the hundreds, from nearby schools, from canoe clubs and other organizations, have come to learn to read a sky chart set in stone on the lawn below the canoe, and why the hulls extend from the stern, tapering to a point called the moa, where ancestral spirits can enter or leave the canoe.

Once launched, Mo‘okiha will be a floating classroom, but the lessons she teaches will differ from those the Hokule‘a’s early voyages imparted. A generation ago, Hawaiians were struggling to recover indigenous knowledge and culture that had been suppressed, and nearly lost, in the century and more following Western contact. Their children are combining the wisdom of the past with the technology of the present to bring the culture into the future.

“My generation has modern knowledge,” Kala says, “but the foundation is the ancestors and the guidance of the kupuna [elders]. When you’re on the canoe, you’re learning to sensitize yourself to the conditions our kupuna had down: reading ocean swells, stars, intuition . . . we’re forming that bond with them. At the same time, we’re introducing science — meteorology, [modern] technology — into our culture.” 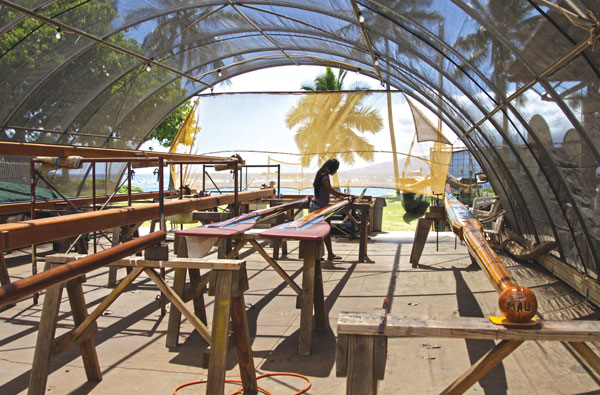 Mo‘okiha exemplifies this sea change. Like traditional canoes, she is held together by rope — six or seven miles of it lashing her hulls, deck, and soon her masts. But those hulls are fiberglass, lighter and easier to maintain than wood. It’s an innovation the ancestors would have approved of. When voyaging canoes go long distances, they can be at sea for a month, says Tim Gilliom. “If the canoe is lighter, you can carry more food.”

Tim will captain Mo‘okiha when she sails this December. He comes to the task with impressive credentials. A fisherman by trade, he has manned the helm of the Hokule‘a in far-flung places, and in the past sixteen years, has logged more hours constructing Mo‘okiha than most. Tall and rangy, he is constantly ducking his head as he moves along the vessel’s deck, beneath the hangar’s too-low ceiling.

“The first launch, we’ll do a protocol, test-run the canoe, stretch and adjust the rigging,” says Tim. “We’ll go to a windy area and get rocked around, shake the canoe up structurally to make sure it’s all good. Anything you want to learn in school,” he adds, “you learn on the canoe —math, science, culture.”

Carl Eldrich has been involved with Hui O Wa‘a Kaulua from the start. When I tell him folks call him “the kupuna of the canoe,” he scoffs. “Why kupuna? ‘Cause I’m the oldest guy in the room.” In the next breath, he’s proving his pedigree.

“In 1996, we set the keel on Mo‘okiha. Hundreds of people have worked on the canoe, not only with their hands, but by giving us food, drums of water, contributions.

“For Polynesian people, the canoe was the most important thing. It fed them. They traveled on it, went to war on it, moved to other islands. The canoe was such a spiritual force, if they gave up on it, their whole culture and the people would die.

“A canoe is built with hands and tools, but it’s also built spiritually. Every hand that is placed on the canoe, the spirit of that person goes into the canoe and that is what guides the canoe.

“When you get on the water, all your land problems are left on land. Everybody’s busy doing something, working together.”

“Getting it in the water is the main thing,” says Matt Lane, Hui O Wa‘a’s development director. “The launch of this canoe is tying this community together, binding old wounds.” He notes financial contributions by local businesses, the kupuna program that will bring elders in as docents, training children as young as ten on the canoe. “This is authentic,” he says. “The early Polynesian voyagers were the astronauts of their time. We’re seeking answers; how do we heal the world? We’re looking into the past to find the future.”

“You cannot hurry the time.”

Kimokeo Kapahulehua leans into the conversation, his index finger tapping the table for emphasis. “The canoe will be finished by the date of launch,” he says. His confidence is backed by what Hui O Wa‘a has accomplished since he signed on as vice-president in 2010. (He’s been president since January 2012.)

“Our educational practices started up again when Kimokeo got involved,” Tim Gilliom says. “We have a whole new board of respected people Kimokeo brought on.”

Kimokeo supported the efforts of state legislators Roz Baker and Angus McKelvey, Lahaina Restoration Foundation’s past and present directors Keoki Freeland and Theo Morrison, and Ke‘eaumoku Kapu of Aha Kiole Advisory Committee (which consults with the Legislature on resource management) to obtain legislation that secures the right of Hawaiian voyaging canoes to have slips at small-boat harbors across the Islands. There’s a new, $20,000 trailer that will pull Mo‘okiha to Mala Wharf the night before the launch, and Kimokeo is working to obtain a long-term lease on the land the Hui occupies. His goal is to establish an institute of celestial navigation.

But first, he’s got to get the canoe in the water.

“If I’m going to launch a canoe,” he says, “I have to have a priest. I have to have a captain, a crew and a kupuna. Timmy is my captain. Kala is the navigator. Carl is the kupuna. Kumu Keli‘i Tau‘a is the priest. He blessed all the voyaging canoes from day one, including the Hokule a.”

“The protocol has been passed down traditionally, researched through the Bishop Museum and made available to us as practitioners,” says Kumu Tau‘a. “Part of the launching ceremony is to have crewmembers participate in an uniki ceremony, a graduation. That will take place on land. After the food is partaken, I will bless the canoe with ocean water, climb onto the canoe and take the remains of the food to the ocean. Kimokeo has asked me to have a hula performed that means, ‘Hold fast to those things that are present and valuable to pass on to your children.’”

I ask him what it feels like to have waited so long to bless Mo‘okiha’s completion.

“Kupuna always felt that when it’s time, it’s time,” he says. “You cannot hurry the time.”

For information on attending the launch — and how to help make it happen — visit www.huiowaa.org.