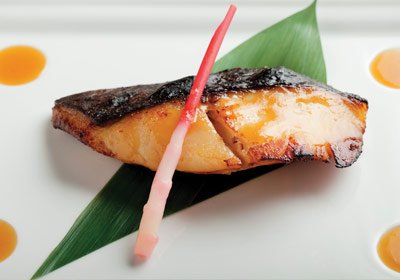 Do you remember your first time? For me it was in 1996, at an undistinguishable strip-mall sushi bar in the northern suburbs of Chicago.

I remember that first taste of glistening red maguro (bluefin tuna), draped over sticky rice, as if it were yesterday. I’d never seen a lucky cat before — let alone slivers of raw fish, arranged artfully on a platter, that were expected to stand in for dinner. To say I was skeptical is an understatement, yet one bite was all it took. I was hooked.

My initiation into the world of sushi occurred two years after Nobuyuki Matsuhisa and his business partner Robert De Niro established Nobu New York in Tribeca, in 1994. Seven years before that, the chef had opened Matsuhisa Restaurant in Beverly Hills. There had been sushi restaurants on U.S. soil before 1987, but until then, there had been no “Nobu style” cuisine. The resultant buzz given the inventive chef from critics and celebrities on both coasts helped light the fire under the uncooked-seafood craze that burned across the U.S. in the mid-nineties.

Suddenly everyone was craving sliced raw fish enhanced by a wasabi/shoyu one-two punch and washed down with slices of sweet and pungent, freshly grated ginger. People who didn’t even know they liked fish were slurping sushi, and what was a later-in-life discovery for baby boomers became baby food for their offspring.

Chef Matsuhisa’s culinary education started in Tokyo, where he actually lived on the premises of a sushi bar named Matsuei. He worked there for over six years, until a customer enticed him to come to Peru. It was during his stay in South America that Nobu style was born, a traditional sushi preparation enhanced by ingredients and flavors of the local area. Flavor combinations we take for granted today were not a part of sushi before Nobu came along and put jalapeño peppers atop sashimi, among other novel twists.

It was in Alaska, where Nobu opened his first restaurant, that he fell in love with black cod and perfected a preparation that holds its own as a Nobu signature dish even today. Sadly, the Alaska restaurant burned down shortly after it opened. Fortunately for sushi lovers, Nobu moved to L.A., where he worked steadfastly for nine years to repay his obligations before opening Matsuhisa in 1987. Wildly successful, the restaurant drew the attention of actor Robert De Niro . . . and the rest is history.

I have had the good fortune of dining at a number of Nobu’s eponymous restaurants around the world, including those aboard Crystal Cruise ships. (Who needs a grand dining room with flaming baked Alaska, when you can tuck into Nobu’s sushi bar nightly?) Since 2012, when Oracle founder Larry Ellison bought the Four Seasons’ two hotels on Lana‘i and convinced Matsuhisa to open on site, Maui County residents can enjoy the pleasures of Nobu-style sushi without having to endure airport security screenings. Just hop on Expeditions’ Lana‘i ferry and in forty-five minutes you’re there!

Every Nobu restaurant offers an impressive dining experience, and Lana‘i’s is no exception. Using raw fish and just a few other carefully curated ingredients, Nobu creates a visually appealing presentation to accompany those unforgettable tastes.

Take the chef’s signature toro tartare in wasabi broth with caviar. Although toro tartare appears on dozens of menus in the Fiftieth State, rarely is it seasoned so expertly and never in my experience is it topped with such a generous dollop of osetra caviar. The combination of these remarkable flavors is like taking a bite of summer fireworks, the salty beads of caviar enhancing the rich, mellow tuna the way lingering shimmers of light brighten the sky of a summer night. There’s even a rare mountain peach on the side, nature’s most perfect palate cleanser, like a cherry shave ice on a hot afternoon.

Besides dishing up some of the world’s best cuisine, the famous chef’s new venue on the island of Lana‘i overlooks one of Hawai‘i’s most fetching crescent bays. The Manele Bay hotel’s recent remodel pays homage to the meticulous forethought given to the food and decor at Nobu. Subdued lighting brings an understated glow to a room richly furnished with organic materials, such as driftwood candleholders, giant stylized sea-urchin light fixtures, and tables custom crafted from local hardwoods by area artisans. The ambiance invites relaxation and lingering, two important elements of Nobu’s omakase service, wherein guests put their menu choices in the hands of chefs who create course after course of delectable preparations.

The night I ate at Nobu Lana‘i, my companion and I were served wagyu Carpaccio (a raw Japanese beef) with caper, ponzu sauce, and negi (spring onion); uni (sea urchin) rolled in a shaved heart of palm flavored with the most amazing ricotto sauce; Nobu’s famed black cod in mirin; short ribs; miso soup; and a plate of traditional sushi that on its own would have been a more-than-adequate dinner.

Just when we thought we could not manage another bite, our server presented a molten lava cake with homemade green-tea ice cream. We intended to take a teeny bite solely for sake of this story, when suddenly the entire gooey, hot-fudgy, shimmery bowl of chocolate sunshine was gone, gone, gone. It was the best, best, best  version of the ubiquitous dessert I’ve eaten.

Although many of the same menu items are available at every Nobu, the staff mixes things up so you’ll always have a new experience, regardless of how often you stop in. Say you’ve been to Nobu in Los Angeles or New York City a dozen times. Simply advise your server, and the chefs will create unique and inspiring options for your omakase.

Dedication to guests’ satisfaction is how Nobu created “New Style” cuisine. When a diner admitted he didn’t like raw seafood, the chef “cooked” the paper-thin sashimi using scorching-hot sesame oil, an enhancement now favored by many raw-food aficionados.

Even though fish is the backbone (or shall we say “dorsal fin”) of a sushi restaurant, Nobu has launched a new vegetarian menu with at least twenty-five different options, such as grilled shiitake mushroom salad tossed with (you guessed it) jalapeno dressing. The cleverly curated children’s menu could convince younger guests who cut their teeth on sushi to forgo ebi (shrimp) and uni for a shaved hearts-of-palm “spaghetti” topped with creamy Parmesan sauce, or teriyaki salmon skewers, a welcome break from the usual faux food offered on kids’ menus.

In due time, Nobu will feature an authentic sushi bar, but for now it’s dining-room service only, performed by the most well-trained and attentive wait staff in Hawai‘i. Restaurant manager Ross Boykin took his employees to Nobu Waikiki in Honolulu for in-depth training, so that, along with proper technique and product knowledge, they could develop a passion for the food they would be serving. When your server emotes about the food, as ours did, it is so contagious that, when we left, I heard myself declare that dining at Nobu was one of the most exciting culinary experiences I’d had in recent memory.

It was akin to that first time in 1996, with the benefit of a no-holds-barred enthusiasm for Nobu’s imaginative sushi stylings.