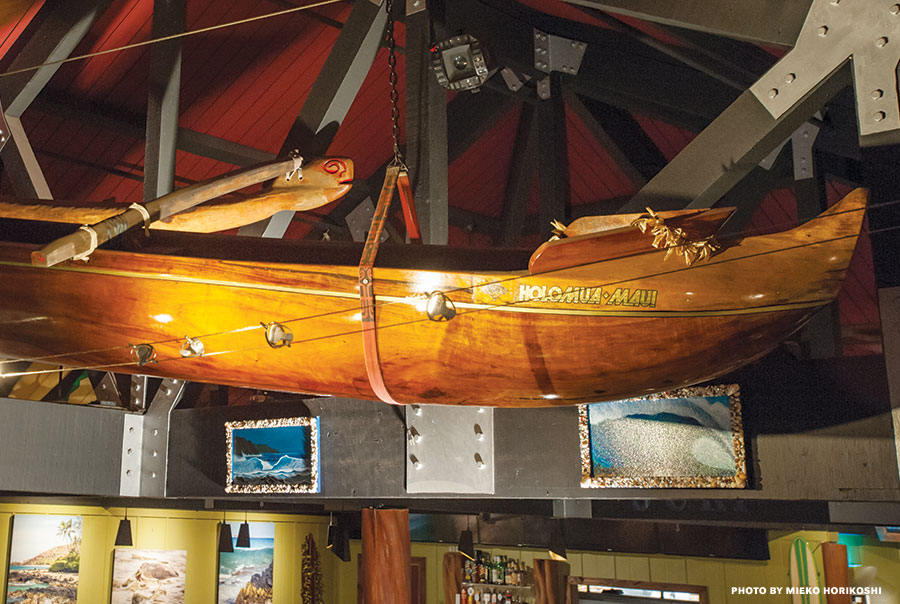 Ron Panzo doesn’t believe in coincidences. Ask for proof, and he’ll tell you the story of the canoe that hangs from the ceiling of his restaurant, Nalu’s South Shore Grill.

Three years ago, Ron put a request on the “coconut wireless” (word of mouth) for a canoe to use as décor. Six weeks before the restaurant’s opening, he received a call from a Honolulu project manager who was supervising a renovation in Hilo, on Hawai‘i Island. The man told Ron, “The Minute Stop [here] has high electric bills because of a vaulted ceiling. The owners want to put in a drop ceiling, but a koa canoe is hanging from the rafters. We’ve offered it to five canoe clubs, and no one wants it. You have five days to come and get it, or we’re going to cut it up and throw it in the dumpster.”

Ron called a friend and they were in Hilo the following day — only to discover that the canoe was suspended forty feet overhead. They’d need special equipment to lower it safely. As Ron stood in the parking lot, stewing about the logistics and whether it was even possible, the door flew open and shouts came from the store: “Come see this!”

Inside, the project manager held out a camera, its viewfinder focused on the canoe and its decorative honu (turtle) ama (outrigger). What looked like tears of blood streamed down her face. Ron took one look and thought, “I don’t want it.” Just then his cell phone rang. It was his friend and spiritual advisor, Kimokeo Kapahulehua. “You’re not going to believe this, Kimokeo,” Ron said, ”but the honu has tears of blood coming down its face.” Kimokeo replied, “No worry. The koa is our kupuna [ancestor]. Bring her home and we will bless her. It’ll be fine.”

A tsunami of aloha poured in from Hilo residents. A lift operator heard about the canoe and offered his equipment and labor. Once the canoe was secured and lowered to the ground, someone else provided a flatbed truck to bring her to the dock. Ron knew the canoe’s size would make her costly to transport, but when he told the shipping clerk where it came from, and the story about the honu’s tears, she said, “Just wait a minute.” She exited the office, then returned with a smile. “My manager has agreed to lower the cost from $5,000 to $1,200.”

The canoe landed on Maui . . . and sat on the front lawn of Ron’s house for a month. A woodworker estimated she’d need two hours of sanding and a quick varnish, but the job turned into a week of sanding, removing rotten wood, and applying four coats of varnish. “You could feel her mana [power] as we uncovered her beauty.”

The canoe was unveiled on Mother’s Day — one of the busiest days of the year for florists — and Kihei-Wailea Flowers by Cora, located in the same plaza as Nalu’s, was in high gear. Family from Hilo had flown in to help Cora Camarillo. As business slowed that afternoon, they headed to Ron’s restaurant. That’s when Cora’s nephew Ikaika Kalama recognized the canoe. He had noticed it in Ron’s yard — but when he saw it up close, he realized that it was one his uncle had carved. Seeing that the canoe had no lei, Cora ran back to her shop for a strand of maile. With Kimokeo chanting, everyone stood in a circle, holding hands to honor this kupuna. Later they helped secure the canoe in her lofty new home.

Not end of story. Two weeks later, Ron got a call from the project manager who had told him about the canoe and photographed its tears. He said that when he returned to Honolulu, he shared the story with colleagues and turned on his digital camera to show them the weeping canoe. All the images of the renovation were there to view . . . but the seven pictures he’d taken of the canoe were blank. 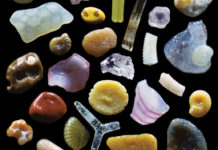 Story by Becky Speere On a recent visit to the Four Seasons’ ‘Aipono Award-winning Lobby Lounge, my daughter and I ordered mocktails—and found paradise in...

A Perfect Day in Kapalua