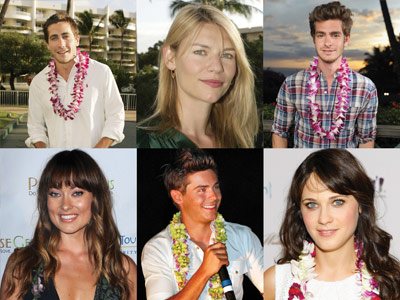 Does Rivers possess a crystal ball? No, he says, “I just know a good thing when I see it.”

And vice versa, apparently. The Maui Film Festival at Wailea has earned a top spot on Hollywood’s own A-list; celebrities covet the gorgeous setting and convivial atmosphere.

“The point of the festival isn’t to make deals,” says actress and director Olivia Wilde, recipient of the 2011 Shining Star Award. “It’s about celebrating what makes film fun . . . and watching films under the stars.”

It’s a sentiment echoed by many festival honorees, including actor, director and writer Josh Radnor, whose film Happythankyoumoreplease won the 2010 Audience Award. “Movies are a form of sitting around a campfire and telling a story,” he says. “This feels like one of the most astonishing campfires on the planet.”

The 2012 Maui Film Festival runs June 13 through 17, with screenings at Wailea Resort and the Maui Arts & Cultural Center. Special events include the Taste of Wailea, Taste of Chocolate . . . and the second annual Spago Soiree, hosted by Maui No Ka ‘Oi Magazine on Saturday, June 16. For details on the festival, visit mauifilmfestival.com.