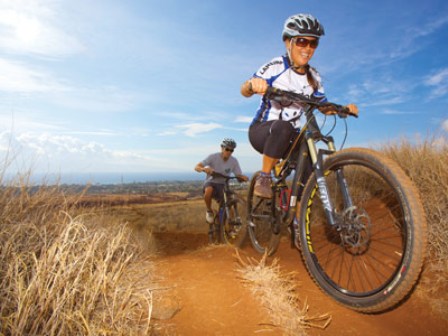 “Oh yeah, you got this,” my guide, Moose, yells as I hurtle past him down the steep single-track trail, snaking through knee-high grass and manmade berms.

Within seconds his shouts turn into whispers, and all that’s left is the sound of loose rocks crunching beneath my tires. By now I’m in attack mode: butt off the saddle, pedals parallel to the ground and knees slightly bent. As gravity propels the bike to full momentum, I repeat one of Moose’s favorite lines and try to convince myself that “speed is your friend.”

It’s day two of my all-too-literal crash course in downhill mountain biking, and Aaron Reichert, “Moose” to his buddies, has convinced me to tackle a collection of trails on Maui’s west side. Equipped with a $3,000, full-suspension Specialized Stumpjumper from the demo fleet at West Maui Cycles, where Moose works as a bike mechanic, I’m confident that, at the very least, I have the right gear.

I hustle to keep up with one of my partners for the day, Rick Parlett, a friend of Moose’s and sponsored rider with GoPro, X-Fusion, and other bike-equipment companies. Fighting my instinct to slow down through the rocky, rust-colored terrain, I slam down on the pedals and push forward. Moments later, I clench the rear brake and skid to a stop along a flat patch of dirt.

Along this elevated vista above Lahaina, there’s something to gawk at in every direction. Ahead is a wide-angle view of the Pacific and the islands of Lanai and Kahoolawe. Closer in, it’s like a scene off a Battleship board game, with real-life liners and fishing boats bobbing offshore.

At my back is the Lahainaluna High School “L” carved into the mountainside high above, a landmark also marking the nearby gravesite of Native Hawaiian scholar David Malo, a member of the school’s inaugural class in 1831. Among these picturesque distractions, it’s easy to overlook the adrenaline-junkie playground just under my feet.

To the untrained eye, it seems like a barren field dotted with rocky outcroppings and dirt mounds. But a true mountain biker will see a freeride trail with drops that could crumble even the best shocks, and chutes ripe for high-speed descents.

For Moose, he sees potential. A fixture in the local bike scene and founder of the recently formed Maui chapter of the International Mountain Biking Association (IMBA), he has been advocating for more licensed riding trails around the island.

In November 2011, a series of unsanctioned stunt tracks created by local enthusiasts within Makawao Forest Reserve were deemed illegal and torn down by the Department of Forestry and Wildlife. While the move is a temporary setback for riders, Moose is optimistic about its long-term effects.

“Before that, there was no cohesion within the bike community. As an individual you don’t have a voice, but as a group we have a voice,” Moose says, adding that many bikers are also dedicated conservationists who volunteer their time to protect the natural resources where they ride. 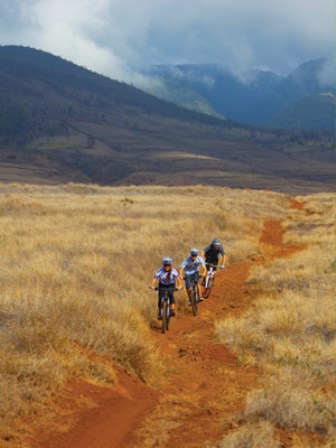 “Whenever it’s time to help, we’re the first ones out there with shovels.”

Through the IMBA Maui chapter, Moose hopes to establish legitimate alternatives to guerrilla trails like those torn down in Makawao. In doing so, the group plans to partner with land managers and trail designers to create safe and environmentally sustainable riding areas.

“Between Polipoli, Makawao and the West Side, the potential here is unreal because we have so many different climate zones to ride in,” he explains, adding that the quickest way to experience Maui’s diverse landscape is along Haleakala’s Skyline Trail.

It’s that exact trail where I was initiated into the sport just days earlier. Not to be confused with the downhill rides offered by tour companies, this off-road version is reserved for serious bikers. The descent begins near Haleakala’s 10,000-foot summit and ends eighteen miles and 6,000 vertical feet later at Polipoli Spring State Recreation Area in Kula.

A recreational rider, I begin doubting my readiness for the mammoth descent. But it’s too late—Moose and I are already at the top, making our final preparations.

“So on a scale from one to ten, how would you rate Skyline?” I ask as I strap a layer of protective gear onto my body, hoping for a number that I can count on one hand.

Judging by the plastic contraptions covering me—more padding than a linebacker and a full-facial helmet thick enough to be nearly soundproof—that number just doesn’t seem right. 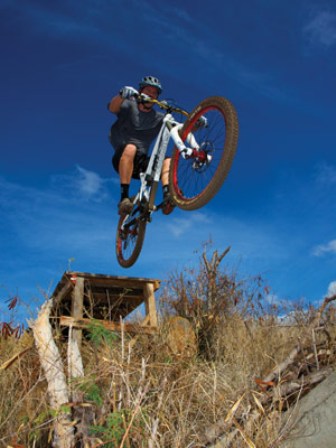 We race down from the summit parking lot and hook a right onto Science City Road. A discreet sign and iron gate mark the beginning of the Skyline Trail. I play follow-the-leader and try to stay close as Moose reverts into a ten-year-old boy, carving “S” patterns in the cindered terrain and bunny hopping over sharp boulders.

For a while I mimic him, trying to stay in line with his spastically carved path. I watch as Moose kicks out his rear tire down a hairpin turn, gracefully changing directions in one fluid motion. Now it’s my turn. Like a discarded rag doll, I fly headfirst over the handlebars and instinctively retreat into the fetal position just before impact.

Apparently, the same landscape that gives Haleakala a Martianlike appeal, with its powdery red dust and lava rock remnants, can also be a death trap when experienced on two wheels.

“Hey, you really know how to fall,” Moose encourages me as I pluck lava shards from my leg.

Thirteen (yes, I counted) involuntary dismounts later, I mention it might be time for a breather.

As we regroup, I notice something novel—a tree. Here at 6,750-foot elevation, the barren landscape has given way to forest. Under the shadow of the eucalyptus, we practically inhale our energy bars and sip on the last drops of our hydration packs.

“So what do you think so far?” Moose asks.

While my body is thrashed, my mind is still high on endorphins. Never mind the aching muscles or bruised ego—this is fun stuff.

“It’s intense, but in a good way,” I say, adding that Skyline is definitely not a “two.”

As I reflect on the past couple hours, I begin to understand the appeal of mountain biking. It’s the childlike freedom, the chance to reconnect with the outdoors and the thrill of danger. There’s no trace of civilization, no cars to contend with, and despite the chaos of the descent, the beauty of this place is staggering.

Arriving at Polipoli, I apologize to Moose for slowing him down.

“At least you’re still smiling,” he tells me. I certainly am. In fact, my cheeks ache almost as much as the rest of me.

Maybe I didn’t exactly conquer the mountain, but at least I survived. I tackled a sport where your senses and reactions mean the difference between walking away and being rolled into the emergency room. Thankfully, I avoided the latter—this time. Judging by the grin on my face, there will be plenty more next times.