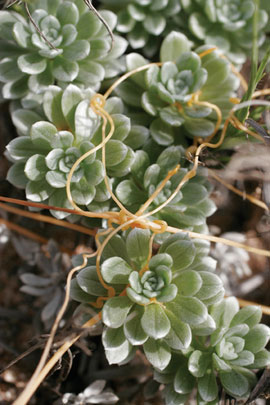 Mo‘omomi Preserve on Moloka‘i’s west end is a place of magic. Even its name evokes mystery: pearl-eyed lizard. . . . How did this desolate, wind-battered coast—921 acres of sand—earn such a name? On a recent trip to the Friendly Isle, I ask Ed Misaki, director of the Nature Conservancy’s Moloka‘i program. He says he doesn’t know for sure. “It’s considered a sacred place,” he says. “People say there’s lots of mana there, lots of spiritual powers in the ground.”

The Conservancy purchased the site from Moloka‘i Ranch in 1988, recognizing it as one of the state’s last best places—a rare, intact coastal dune system. Now a preserve,is home to 22 native plant species, several of them critically endangered. One of the few undeveloped coastlines in the main Hawaiian Islands, it’s a nesting ground for green sea turtles, and potential habitat for monk seals and Laysan albatross. It’s culturally significant as well; since the 11th century, Hawaiians have gathered salt, limu (seaweed), and shellfish at Mo‘omomi—subsistence practices that continue today.

“The area is sensitive to exposure,” adds Misaki, with a look designed to discourage an onslaught of new traffic to the area. His reticence is echoed by others in the Conservancy’s office. No one wants to take me, the writer, out to the preserve; the Krispy Kreme doughnuts I brought as a bribe are only partially successful. The Conservancy offers monthly guided hikes to Mo‘omomi that are already booked months in advance. A story could result in a flood of new visitors, overtaxing the area’s minimal infrastructure. Assistant Natural Resource Manager Sam Aruch finally gets stuck with the job. With characteristic Moloka‘i frankness, he doesn’t bother hiding his disappointment. “I got picked because I’m moving to O‘ahu,” he complains. “If the article comes out and makes people mad, I won’t be here.”

Indeed, more traffic is just about the last thing Mo‘omomi can support. The four-wheel-drive road beyond the paved edge of Farrington Avenue is booby-trapped with canyons deep enough to swallow our truck. Heavy rains often render the soft, red dirt impassable.

A fork in the road leads straight, to the Conservancy’s gated preserve, or right,  to a pavilion maintained by the Department of Hawaiian Homelands. Aruch heads straight, unlocks the gate, and parks above Kawa‘aloa Bay. The azure bay is nicked with whitecaps. Northeasterly winds roar in from the open sea, driving sand into the air—the source of the mile-long dunes stretching behind us like ocean swells.

“The power of the wind is what makes this place so special,” says Aruch. “The wind created the dunes. The salt spray keeps the weeds down, but the native plants are adapted to it.” 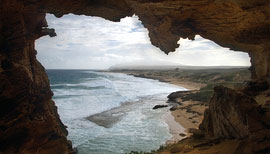 Beach vines cascade down the face of steep dunes. Yellow tangles of native kauna‘oa are cast like nets amidst purple morning-glory blooms. The midday heat is intense. It’s amazing anything grows here. Crumbling sand cliffs frame a golden crescent beach littered with plastic floats and fishing nets—dangerous rubbish that  indiscriminately kills marine life as it drifts from as far as Japan or Korea. Volunteers regularly haul out the trash. We watch as a small boat offshore hauls nets from the water. We cross the beach past several giant, shallow pits—evidence of recent turtle activity. The green-flippered inhabitants show appreciation for the clean-up efforts by laying clutches of eggs in the sand.

We duck into a small cave at Kaiehu Point, the westernmost tip of the beach. Ancient Hawaiians predate us at this spot; ‘opihi (limpet) shells and polished cooking stones are strewn about. Mo‘omomi is riddled with artifacts like these. Adze blanks often surface from nearby Kaluako‘i, the second-most significant adze quarry in Hawai‘i. Baskets of ceremonial salt and human remains have been discovered in sealed caves along the coastline.

In 1971, amazing fossils were unearthed here. In her wonderful, out-of-print book, Moʻomomi, West Moloka‘i: A Coastal Treasure, Hannah Will Johnstone describes the discovery of an unusual bird beak by local resident Joan Aidem. Fascinated by what looked like teeth, Aidem turned the beak over to scientists, who confirmed that it belonged to a previously unknown species, later christened Thambetochen chauliodous, or “astonishing goose with prominent teeth.” Further excavations turned up the skeletons of a flightless ibis, long-legged owl, slender-billed crow, the world’s smallest rail, and 20,000-year-old land-snail shells.

Johnstone also offers a possible answer to the mystery of Mo‘omomi’s name. According to legend, ancient Hawaiians knew of a submerged cave at Mo‘omomi, the source of a stony sponge valued for its medicinal properties. The cave’s entrance was guarded by a formidable mo‘o, or lizard god, with flashing iridescent eyes.

I’m content daydreaming about lizards and fossils, but Aruch is anxious to check on a friend. We emerge from the cave’s shelter into the wind. “One day the albatross will return,” he says. “They’ll need these strong winds.”

The return of native species like the Laysan albatross is the goal that drives the Conservancy’s steady weed-eradication program. Aruch points out where kiawe has recently been removed. Trees are cut, chipped, and used as mulch. 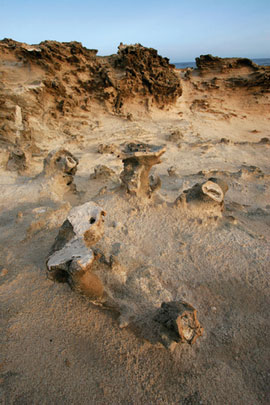 Perhaps the rarest of them all, Tetramolopium rockii is so uncommon that it never received a Hawaiian name. Its habitat is restricted to a narrow belt of lithified sand that runs through the center of the preserve. Well-adapted to this unyielding climate, the diminutive plant all but disappears during dry periods. After a drenching rain, the ground is flush with its daisy-like flowers.

Suddenly I notice the ground is also flush with holes—I narrowly avoid plunging a foot into the entrance of an ‘u‘au kani, wedgetail shearwater’s underground burrow. Burrows are scattered everywhere: in the sand, under hedges, and smack in the center of the trail. Barely hidden beneath some naupaka branches is Aruch’s friend: a shy, downy fluffball quietly awaiting its parents’ return with regurgitated treats. This unprotected chick shows that the Conservancy’s predator traps are working, protecting the ‘u‘au from attacks by feral cats and mongooses. From two burrows in 1999, the population at Mo‘omomi has swelled to over 250. Between the burrows and turtle nests, the dune system is a sprawling maternity ward.

It’s clear that Mo‘omomi is, as Misaki says, vulnerable to intrusion. A few careless steps could crush a hidden burrow or tiny plant. Heedless, noisy visitors could easily scare off dinner for a subsistence fisherman relying on stealth for his catch. If, however, you find the lure of Mo‘omomi’s mana irresistible, sign up for one of the monthly guided hikes. The Conservancy welcomes those who plan in advance and tread lightly. They’ll even arrange airport pick-up. Volunteer guides will navigate the treacherous entry road for you and point out easy-to-miss remnants of the past: a buried shell, an adze blank or—if you’re really lucky—an albatross or monk seal popping in to give the place the once-over. Whether these occasional visitors return for good depends on our collective ability to live and let live.

As Sam Aruch and I leave Mo‘omomi, I’m convinced that the pearl-eyed mo‘o is still here, guarding the treasure—only it looks an awful lot like a modern-day Molokaian.