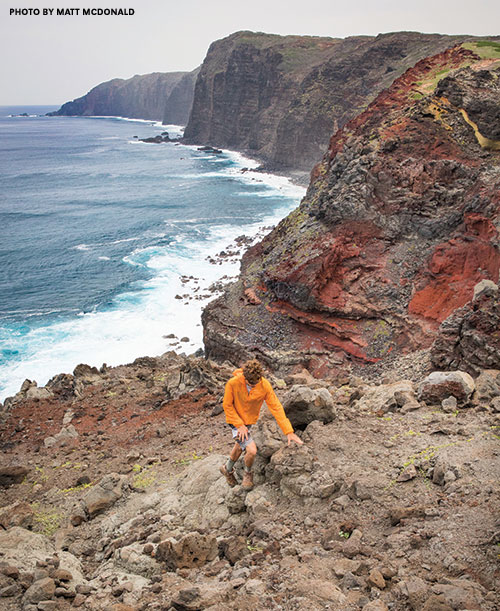 Down on his knees, iPhone in hand, he’s scrambling by the edge of a four-hundred-foot sea cliff, trying to snap a photo. His gaze is fixed at a spot on the ground, his movement is steady and slow, and his face is so close to the scree-covered slope that his breath could move the small rocks.

There’s a tense calm as he leans for the shot, and when the click of the camera breaks the silence, his face erupts in a smile.

“That’s a great patch of ‘akoko grass,” he yells. “Definitely going on Facebook!”

As executive director of Molokai Land Trust, Haase spearheads restoration inside Mokio Preserve—a 1,769-acre parcel on Moloka‘i’s northwestern coast. Along with a handful of interns and staff (and the help of volunteers), Haase is working to rid Mokio of ruinous invasive species and create an environment where native plants and animals are able to thrive. All told, it’s Hawai‘i’s largest coastal and dune restoration of its kind.

Because Mokio has no fresh water, it has never housed permanent settlements. Instead, Hawaiians came here for its resources: gathering ‘opihi (limpets) that clung to the rocky surge zone, pulling fish from the turquoise sea, harvesting the salt left behind in rocks’ indentations when saltwater spray evaporated, and carving adzes at Pu‘u Kaeo—the island’s largest quarry. It’s a place where ground-nesting seabirds flourished and native plants grew abundantly, but that was before the nineteenth century—when everything suddenly went wrong.