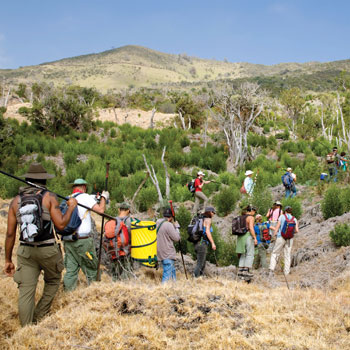 It’s dawn on a Saturday and dozens of people are parking in the gravel lot next to ‘Ulupalakua Ranch Store. You can tell by their dress that this expedition is no surfing safari: heavy boots, knit caps, down vests, Pendleton shirts and camo pants. The air is crisp and silent at 3,000 feet, back side of Haleakala. The mood is cordial but quiet, some handclasps and nose rubbing, but little inclination to chatter. Everyone knows why they’ve come, and it isn’t to socialize. Using stiff brushes, each person scours his or her boots assiduously, knocking off any seed or crumb of lowland soil that might be stuck in the treads. Then the assembled wedge themselves into four-wheel-drive vehicles—along with picks and ‘o‘o (digging sticks) and flats full of seedlings growing in long yellow dibble tubes—and the vehicles begin to caravan straight up the mountain over ranch trails and rocky pastureland.

The landscape is tilted and dizzying at this elevation. These leeward slopes are largely devoid of trees, and the wind beats unbroken against cracked boulders and weary kikuyu grass. The land is pleated and humped with domes, still twisted in the fantastic shapes of lava that once blew out of vents in Haleakala’s Southwest Rift Zone. The sea channel far below ripples in the wind. Sunlight and racing clouds play tricks of color on the cobalt flatness and on the red-brown islands off shore—eyelash-like Molokini, long Kaho‘olawe, and far in the eastern sky, the mirage-like dome of Mauna Kea.

“We’re beginning a march back in time.”

This was all forest once, from the top of the mountain all the way down to what is now called Wailea. People lived here in the old days, walking under a canopy light enough to allow a great diversity of life—a multitude of lichens and spiders, insects and birds that occurred nowhere else on Earth. This was one of the greatest dryland forests in all Hawai‘i. The dryland forests were quite different from their wetland counterparts on the windward side of the mountain, in that they comprised so many more species, species of all kinds, but especially of trees.

I could list the names of these trees, but the names would probably not ring a bell, unless perhaps you know the old chants. Holei is a lovely tree with fragrant flowers, the source of a brilliant dye. Kauila has wood that’s almost as hard as iron. Lama represented both lamplight and the enlightenment of the mind. These trees and dozens of others are almost gone from the Earth, just as the great forest that was their home is almost gone from leeward Haleakala. The key word is “almost.”

All those warm-dressed, clean-booted expeditioners are headed upslope with a single mission—to replant that forest one seedling at a time.

Auwahi is the name of the mountain district where this wildly unlikely reforestation is happening, nudged ahead by monthly outings of quietly determined volunteers.

The first time I went on one of these Auwahi trips was about ten years ago. I remember the austerity of the mountain and the smallness of the seedlings that we inserted into pockets of soil, signing off with a cup of water and a prayer, the wind whipping and whipping them as soon as we turned our backs. These seedlings had all come from the trees that remained in the vicinity, raised in a nursery back at ‘Ulupalakua Ranch headquarters until big enough to be returned to their bleak native homeland. The parents of these seedlings still stood, bent as geriatric patients in an apocalyptic nursing home. With our own backs bent in honor of the almost moribund trees, we planted their keiki (children) for them.

Dr. Art Medeiros is the man who identified the need, collected the native seed, and gathered the forces to heed the call for last-minute, hang-on-by-a-fingernail restoration of Maui’s formerly great dryland forest. Like an Old Testament prophet, the Maui biologist is bearded, eloquent, and standing resolute at the drawbridge before native Hawai‘i’s last stand. He’s the one who identified Auwahi as a “museum forest” with elderly trees that lived without hope—without an understory, a younger generation, a tomorrow. He convinced the Erdman family, whose ‘Ulupalakua Ranch encompasses Auwahi, to participate in an experiment. Together they constructed a ten-acre “exclosure”—a rectangular fenced area that excluded cattle, goats, deer, and pigs. And they sprayed that ten acres with herbicide to destroy the kikuyu grass—an imported grazing plant that chokes out all others.

Those steps alone could maybe suffice to allow a natural system to restore itself. But not at Auwahi. The original trees are too scattered and geriatric. So Art asked for volunteer planters to start these steep mountain caravans and begin reversing two centuries of environmental collapse.

Here are two statements that I have heard many times from Art Medeiros. One: “They said to me, ‘You are [expletive deleted] nuts, brah!’” Two: “It is okay to fail. It is not okay not to try. What are you going to say when your grandchildren come to you and ask, ‘Why didn’t you even try?’”

The last trip I made to Auwahi with the Saturday morning volunteers, bouncing up the high slopes for what seemed like an hour—the travel time must be far less, but I always lose touch with the clock on these mind-bending excursions—we parked by a fence with plants crowding and pushing against the boundary. On the other side of the fence line, treetops were whipping gleefully in the winds. I thought immediately: “Who the hell built a botanical garden up here?” Then in an instant I realized.

You can see Auwahi on Google Earth—a ten-acre rectangle of exuberant foliage against an otherwise bitten-to-nothing rockscape. A grove of reclaimed forest.

But Google Earth is actually out of touch, because it shows only what we now call Auwahi One. The next exclosure, Auwahi Two, twenty-three acres in size, has just this month been planted to its capacity. Art and his mainly volunteer staff are talking about bringing some of the rare elements back to Auwahi One—the ferns, for example, that can’t thrive without a “locked-in” forest canopy.

“With the ferns,” Art told me, “we begin a march back in time. People think that I know the Hawaiian dryland forest. But now, every year, we march back to a forest I am increasingly unfamiliar with.”

A visiting biologist has discovered a lovely white spider that lives only in the Auwahi forest. A bright red native bird, the endangered ‘apapane, has returned on it own to Auwahi. Art described the sighting as “almost a religious experience.”

“None of this could have happened without the Erdmans,” says Art. “They are the greatest. At one point they actually asked me, ‘Are we doing enough?’” You won’t find anyone to answer that question in the negative, not since late 2009, when the Erdmans gave the Maui Coastal Land Trust a conservation easement to more than 11,000 of its pastoral acres, including the Auwahi groves. Their gift permits agricultural pursuits on the land but bans development in perpetuity.

Success at Auwahi has inspired a dozen or so other major landholders of these dramatic, dry mountain slopes (including Haleakala National Park) to form the Leeward Haleakala Watershed Restoration Partnership. The group intends to regrow native forest on more than 43,000 acres of what is presently stark pastureland.

These partners are not simply idealistic about saving rare plants and critters. They have practical ideas about the health of the land. The forest would yield valuable hardwoods. (Think koa, which is the mother of these dryland forests.) It would create job opportunities and supply the physical materials for traditional Hawaiian cultural practices. And it would raise the water table for a major part of the island, bringing rainfall back to now-parched hillsides, perhaps even regenerating the na‘ulu clouds that old-timers say used to feed not only Haleakala’s kula (mid-elevation) slopes, but also the hills of Kaho‘olawe. Art Medeiros is also envisioning a museum from which a school program would emanate.

And why not? Auwahi Three is already underway—151 acres for the new increment. The forest is growing again. Get yourself some good boots. This is the best experience you will find anywhere on earth to undestroy the natural order. You have something better to do on your day off?

To volunteer for an Auwahi service trip, call 572-4471 or email auwahi@yahoo.com. You will need ankle-high hiking boots, raingear, layered clothing, two liters of water, lunch, and sunscreen. High-clearance, four-wheel-drive vehicles are most welcome.