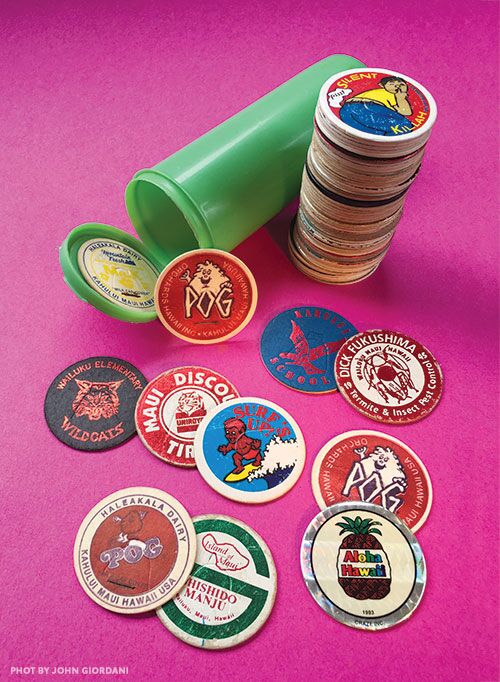 Kids growing up in Hawai‘i’s plantation camps in the early 1900s had little in the way of toys, but plenty of ingenuity for turning everyday items into fun. One of the most enduring games they invented was played with the humblest of objects: the cardboard disks that once upon a time sealed glass milk bottles.

The rules were simple: Stack a bunch of covers, print side down, and take turns trying to hit the pile with a slammer, or kini. Any covers knocked off that landed face up went to the thrower, and the youngster with the most caps at game’s end was the winner.

Through the decades, milk caps came and went in the revolving cycle of schoolyard games. The artwork on those covers evolved, too, and by the end of the century, the cardboard disks had become an international collector’s item.

Audrey Rocha Reed attended a strict parochial school in Honolulu in the 1950s. “The nuns were furious” about the game, she remembers. “It was ‘unbecoming’ for young ladies to play with milk caps.”

Some adults found the game too much like gambling, because winners kept the caps they flipped. That belief solidified once money was involved; in the 1990s, schools banned the game because it sometimes led to fights and thefts.

Kay Fukumoto, a Kahului girl who went to school in the 1960s, disagrees with the gambling connection. “It’s skill based,” she insists. “You gotta hit it the right way.”

And Patsy Shishido of Hāmākuapoko says that in the 1930s, “We didn’t gamble—we never had money!”

The game may have been based on a card game called Menko that existed during Japan’s Edo Period, and could have arrived with Japanese immigrants who came to work on Hawai‘i’s sugar plantations in the late 1800s. Whatever the game’s origin, the Valley Isle had a role in its history.

By the early 1970s, Maui’s Haleakala Dairy no longer used milk bottles, but when dairy president Peter Baldwin told his marketing director, Charlie Nalepa, about playing with bottle caps in the 1940s, Nalepa had an idea. The dairy named its new passion-orange-guava juice POG and promoted it with bottle caps with the POG logo. Soon, kids were coming by the dairy office to buy a hundred at a time.

O‘ahu youngsters playing with the disks about 1991 apparently were the ones who dubbed them “Pogs,” and the game’s fame spread. In 1993, Haleakala Dairy sold the POG brand name to an investor—who formed the World Pog Federation. Millions of the cardboard disks were printed with fancy designs, and kids around the world played Pogs.

Madge Walls played the game in Hilo in the 1950s, and says the newer version isn’t the same as the old disks that were actually used on milk bottles. Those covers absorbed a slight amount of milk, and had a staple that connected to a pull tab. That, and the bending and pulling of opening the bottle “all combined to created slightly warped caps,” Walls says. “The wobbly, springy nature of the stack made the game wild and unpredictable.” Compared to the shaky stack of slightly sour-smelling caps and the joy of beating siblings to the empty milk bottle, the glossy commercialized Pogs her sons played with in the 1970s were “not anywhere near as much fun.”

Peter Baldwin, who helped launch the worldwide craze, begs to differ. Of the thousands of kids who played with milk covers, he says, “They all had fun.”