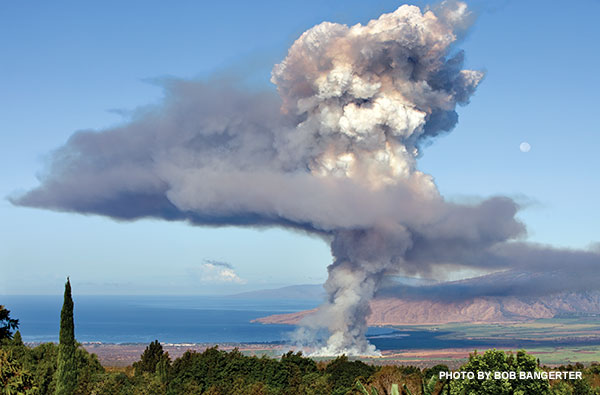 Roughly six weeks before a Maui sugarcane field is harvested, crews gradually eliminate its drip irrigation. Shocked by this sudden manmade drought after nearly two years of regular watering, the cane begins to store energy. Thick stalks load up on sugar while leafy tops yellow under the tropical sun. Everything is drying for the big burn.

On the day of the harvest, Hawaiian Commercial & Sugar Company’s fire-starting crew will gather along the edge of the field several hours before dawn. Dressed in jackets against the morning chill, they’ll share a few laughs and catch up on the latest news as they stand in the darkness, waiting for the go-ahead.

If conditions meet state Department of Health Clean Air Branch standards, several of the crew will climb into a pair of red Ford trucks and circle the field in opposite directions. Every fifty feet, they’ll stop to lean out a window and give a blast from an industrial-sized propane torch to start little blazes along the perimeter of the cane.

By the time the two trucks meet on the far side of the field, all the little fires will be crackling and sparking as they spread inward, away from the firebreak roads. Before long, the fires join to become a roaring ring of flames that entirely circles the dried-out plot.

When set right, the fires create a sort of vacuum as they collapse in upon themselves. Burning superhot and fast, the flames expel smoke, steam and ash straight up, thousands of feet into the air. If things go as planned, the smoke and ash are shot so high that the upper-level winds catch them and blow them out to sea before they can fall back toward neighborhoods, schools and beaches.

On a calm day, a cane fire looks a bit like a nuclear bomb has been detonated. Tourists pull off the road, scratching their heads and wondering whether the end has arrived. Once the uninitiated are assured that yonder Pa‘ia has not been wiped off the map, they almost always pose the same awestruck question: “How do they get away with that?”

Not every burn goes as planned. Rarely a week goes by that The Maui News does not run a letter to the editor from an asthma sufferer or other afflicted person railing against the mess of cane burning. Drivers who regularly brave the red-dust gauntlet of windswept Mokulele Highway can also be quick to weigh in.