Sometimes the best way to explore a place is to immerse yourself in its natural wonders. We asked five marine experts to share their favorite snorkeling spots in Maui County. Prepare to peek beneath the surface and see how Hawai‘i’s other half lives. 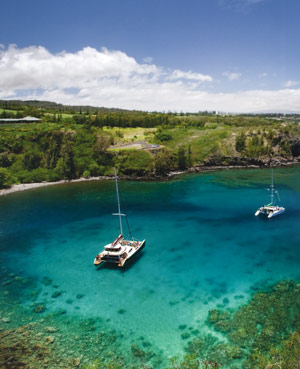 Dipping into Honolua Bay is like swimming in an oversized aquarium. Neon-colored butterflyfish whiz past, while lanky trumpetfish hide in the shadows of the lava formations and spiny urchins dot the reefscape. Add its crescent-shaped lava borders and clear waters, and this larger-than-life fishbowl experience is complete.

The area is protected as a marine-life conservation district, and the result is a pristine ecosystem and sights to satisfy snorkelers of all levels. Nick Brown, a shoreline snuba guide with Teralani Sailing Adventures, shared some of his favorite Honolua Bay moments — like the day he swam with a manta ray, its birdlike motion propelling it back and forth for forty-five minutes before it disappeared into deeper waters.

Nick adds that a typical day here will include sightings of green sea turtles, octopuses, white-spotted puffers and unicorn fish. While most people head towards the bay’s north side, Nick says the opposite end is also worth a visit.

“Towards the point on the south side, the rock formations have some great hiding spots for big fish,” he explains. “When the fish is as big as your fins or more, that’s a big fish.”

When to go: Honolua is best during the calm summer months. Come wintertime, massive waves from the nearby surf break can wrap around into the bay. In addition, heavy rains can cause runoff into the bay anytime of the year, reducing visibility.

Insider tip: The rocky shoreline at Honolua Bay can make accessing the ocean tricky. Tour companies such as Teralani Sailing Adventures deliver passengers to the heart of the action. “The tours drop you off right next to the reef, so you get off the boat and start seeing fish right away,” Nick says. 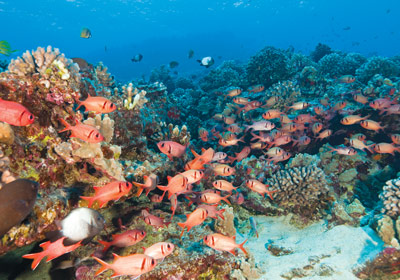 What could be more fitting than to find great snorkeling at a beached named after a popular Hawaiian game fish? A favorite among beginning snorkelers, Ulua Beach boasts a gently sloping, sandy entry that makes transitioning from bare feet to fins simpler. At the north end of the beach is a rocky outcropping teeming with fish and coral. Its easy entry, colorful inhabitants and bathroom and shower facilities make Ulua one of Maui’s most user-friendly snorkel spots. Maui Mana Adventures owner Miranda Camp, who leads personalized tours throughout the island, is a regular here. As a certified marine naturalist, she’s always eager to point out the endemic fish found only in Hawaiian waters, including the electric-hued belted wrasse and multiband butterflyfish.

Another highlight is spotting rare nudibranch — vibrant sea slugs that appear to be plucked from a Dr. Seuss tale. These tiny wonders are easily overlooked, but once spotted can mesmerize even the most experienced snorkeler.

“I’ve seen some nudibranchs at Ulua Beach that I can’t find in the books,” says Miranda. “They’re just gorgeous, and I see a large variety of them in that area.”

When to go: Conditions are favorable year-round, except when the occasional summer swell stirs up the ocean and reduces visibility. Snorkeling here is generally best in the early morning when winds are lighter.

Insider tip: Intermediate and experienced snorkelers can enter the water at Ulua Beach, then cruise around the point and exit at neighboring Mokapu Beach. Return to Ulua Beach via a short walking path connecting the two beaches. 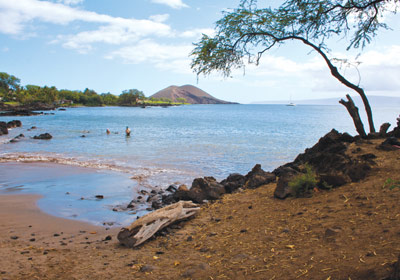 Hawai‘i is home to many underwater marvels, but perhaps none more charming than the beloved honu, or green sea turtle. Sightings are nearly guaranteed at Makena Landing, thanks to exciting and diverse underwater terrain.

“We see a high number of green sea turtles in that area, partially because of its rocky habitat,” explains Hannah Bernard, president and cofounder of Hawai‘i Wildlife Fund. “They can feed on the limu [algae] that grows on the rocks, and there are caverns, arches and caves that they can rest in.”

Peel your eyes from the turtles for a bit and notice the backdrop, a wonder in its own right.

“The corals are growing on a lava terrain that is already interesting and beautiful, so it just adds to the experience,” says Hannah.

When to go: Makena Landing is located along the same southern coast as Ulua, and shares similar wind and visibility conditions. 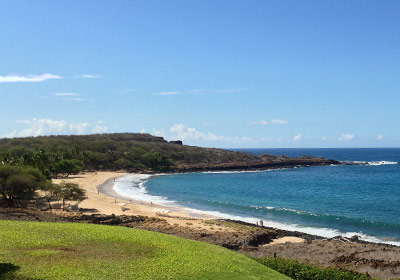 “This is the spot you go to for the health of the reef, the variety of fish and its surroundings,” says Kyle. “Once you’re out of the water, you’re on one of the best beaches in Hawai‘i.”

Like Honolua, Hulopo‘e Bay is a marine-life conservation district. Masked landlubbers can enjoy an abundance and variety of marine life, including large parrotfish, goatfish, and schools of convict tang that “are like a swarm of yellow-and-black bees moving in a cloud,” says Kyle.

Plus, there is always the potential to spot Hulopo‘e’s famous spinner dolphins. While it’s illegal to approach the dolphins, their curiosity may bring them to you.

“If you’re in the water, you can hear them,” says Kyle. “They sound like aliens talking to you.”

During the week, Trilogy Excursions sails to Lana‘i and makes snorkel stops at Hulopo‘e Bay between 11:30 a.m. and 3 p.m. If you prefer to come on your own — or on a weekend — catch the Expeditions ferry at Lahaina Harbor. It’s a forty-five-minute ride to Manele Boat Harbor on Lana‘i, and a ten-minute walk from the harbor to Hulopo‘e Bay.

When to go: Conditions are favorable year-round, except when winter swells cause large waves.

Insider tip: Bring your own snorkel gear. The closest place to rent equipment is in Lana‘i City, a twenty-minute drive from Hulopo‘e Bay. The only nearby dining options are at the Four Seasons’ Manele Bay Hotel; otherwise, be sure to bring enough food and water. 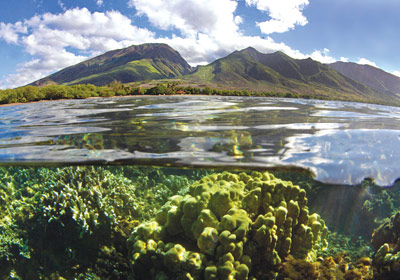 Swim among ancient giants along Olowalu’s coastline, where centuries-old coral formations have created a labyrinth of massive reef structures in very shallow water. Compared to most other spots on Maui, where coral colonies grow on lava, the reef at Olowalu is made entirely of coral.

“One of the largest colonies is roughly twenty-five feet in diameter,” says diver and marine naturalist Pauline Fiene, owner of Mike Severns Diving. “If you use the average estimated growth rate of that particular species of coral, that could mean it’s about 500 years old.”

Sprawling across 450 acres of ocean, the coral formations here comprise a living museum of diverse coral species — and other aquatic residents. Pauline points out that Olowalu’s coral reef is teeming with marine life that lives in its complicated network of channels, and includes a rare black-tip reef-shark nursery and manta-ray cleaning station.

When to go: Snorkeling is best on days when there is little or no surf rolling in, and around low tide when the water is shallow and the corals are closer to the surface and more easily viewed.

Insider tip: A convenient spot to enter the water is near mile marker 14 along Honoapi‘ilani Highway. 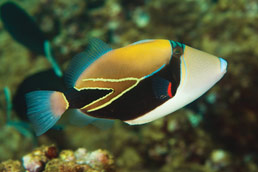 Here’s advice from our pros to ensure that your snorkel experience is safe — for you and the marine life you’ll meet:

1. If you’re new to snorkeling, go with a guide the first time — or at least seek local knowledge of ocean conditions and safe places for beginners.

2. Though they may not look it, corals are alive and fragile; harming them also harms the habitat for reef fish and other marine life. Avoid touching or stepping on coral, and take extra care when entering and exiting the water.

3. No peas, please — or any other kind of food. Feeding marine life can disrupt their natural populations.

4. Sunscreen lotions can be toxic to marine life. Save their skin by using a product that’s certified marine safe; save your own skin by applying it at least thirty minutes before entering the water. Or avoid the need for sunscreen by wearing a long-sleeved rash guard.

5. Help protect Hawai‘i’s endangered species. Stay at least ten feet away from turtles, 100 feet from monk seals, wherever you encounter them. Keep dogs from approaching turtles or seals on the beach.