Earth rotates. Now we’re looking at the other side of the Milky Way—stars situated on the outer third of our galaxy. Orion “the hunter” hangs in freefall. Old-days Hawaiian stargazers saw this constellation not as a hunter but as a pair of hands playing a game of cat’s cradle (hei), snaring us in imaginative nets.

To the right, just above the slate-colored ridgeline of the crater, there’s a fizzling puff of starlight, something easier to see by not looking directly at it. The Pleiades. In Hawaiian: Makali‘i. This is where we came from, they say, “they” being many advanced cultures, including the Hawaiians. These cultures watch for the day, once a year, when the Pleiades rises in the East exactly as the sun sets in the west. That’s the day we have the sun at our backs and a straight shot for home. That’s the new year, the makahiki.

If we did come from there, we came recently, in the cosmic scope of things. Makali‘i is only 50 million years old. The dinosaurs never saw it. It is actually a litter of some 250 newborn stars, a stellar nursery. 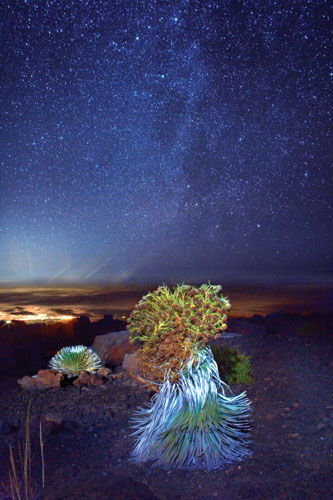 If this isn’t reality, what is?

The outpouring of new images from the Hubble Space Telescope has begun to rock our imaginations with the sheer beauty of countless cosmic organisms. But these photographs from the crater do something Hubble cannot: they include Earth. They include us as an integral part of the grand panoply. Doing so, they challenge the illusion that we are safely “here” gazing at “space,” which is “out there.” Earth is “out there,” too.

Such is the deep excitement of a night spent in Haleakala Crater. Once you’ve been exposed to the silent universe at the summit, you can never really go back “indoors.” It takes guts to look at the sky and consider: We are part of the cosmos. Even if you cover your eyes, it doesn’t go away.

Astronomer Harriet Witt, one of Maui’s greatest contemplators of the cosmos, contributed significantly to our musings here. If these photographs excite your interest, join Harriet in one of her frequent tours of the night sky. For details, visit www.passengerplanet.com.

Wally Pacholka, a retired accountant, photographs the night sky, favoring locations in America’s national parks and monumental wilderness areas. He will hike all night with fifty pounds of photographic equipment on his back, working alone. He uses simple techniques, a standard 50mm lens, judicious tripod placement, and lengthy exposures that bump “naked eye” light and color by about 50 percent. Sometimes he’ll shine a flashlight on nearby objects to clarify the Earthly perspective.

Wally first brought his mission to Haleakala National Park in the summer of 2008, shooting the night sky from the crater’s rim, and returned last December, this time to spend several days camping and shooting from inside the crater for Maui No Ka ‘Oi—with spectacular results.

Log on to Wally’s website to view his night sky series of America’s national parks. You will be star-struck. www.astropics.com