Wally Pacholka has made it his mission to photograph the night sky. The California-based astro-photographer used a standard 50mm lens and lengthy exposure to capture the Milky Way in its brilliant arc above Haleakala’s lunar landscape. Our neighboring planet Jupiter is the bright spot below. Two-thirds of the way out from our galaxy’s core, we see it edge-on, looking back at the light of myriad stars darkened by heaps of interstellar dust.

Far right, above the crater’s rim, stands the Southern Cross—four stars in a kite shape—pointing directly to the South Pole. Polynesian navigators sailing north to the Hawaiian Islands would have watched the Southern Cross gradually sink toward the horizon. When the distance between the top and bottom stars was the same as the distance between the bottom star and the horizon, they knew they had reached Hawai‘i’s latitude. They would have then witnessed Maui’s fishhook—the tail of Scorpio, here digging into the first redness of sunrise—apparently pulling the islands out of the sea. 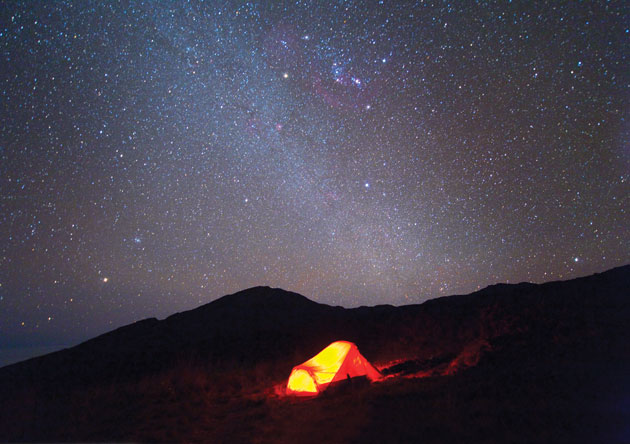 Night pulls the mountaintop even closer to the stars. There isn’t a tree or a cloud to shelter me from naked exposure to space. Shout, and my voice simply dies in the silence. “How small we are!” says my ego, which likes to be a big shot but gets scared of the dark. And yet something profound within me, within all of us, rejoices at the sight of the night sky. We are an integral part of something beyond grand. Our little bigness—this is what I learn at night in the crater. Under Haleakala’s sky I am infinitesimal. Afterwards, at home, I need to stoop to get in the house.

Just above the stark escarpment of Haleakala Crater, the moon pours its cold reflected sunlight into a world adapted to conditions that are close to extraterrestrial—arid cinder, unshielded sunrays, almost companionless conditions far from forest and field. Plants here look as though they are ready to ride to similar worlds across gulfs of space. Or perhaps they have just arrived? Who knows. Moonlight plays tricks on the Earth, especially when abetted by the bright spin of nearby Jupiter.

A lunar rainbow or “moonbow” arcs brilliantly over the top of Ko‘olau Gap. The crater is a daily caldron of weather. Rain falls here in every possible direction, including straight up. The gap, which runs off to the left in this view, constitutes a straight chute down to sea level at the Ke‘anae/Wailuanui area. Typically, weather comes shooting up the gap every afternoon, engulfing hikers. Then the nightly refrigeration of the cosmos pushes all weather down to Haleakala’s lower slopes.

Daily witness to this heavenly ebb and flow is Hanakauhi, the “mistmaker,” a sheer-faced peak at the brink of Ko‘olau Gap. In the moment recorded here, Hanakauhi is almost completely immersed in cloud. Only its domelike peak peeks above the clouds near the uppermost curve of the lunar rainbow.