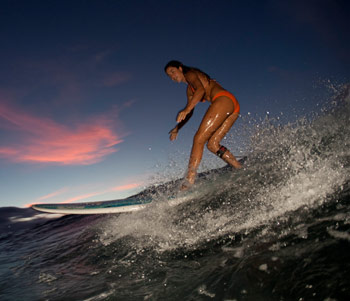 Kenneth “Woozer” Goring would have been the kind of kid who runs around the neighborhood until the streetlights come on. But Woozer grew up with the ocean as his playground. He remembers sitting on his surfboard in Tavares Bay on Maui’s north shore, bobbing in the waves until dark.

“It wasn’t meant to be night surfing; I just couldn’t get myself to come in,” he recalls. “My mom would come out on the point and wave her arms and yell, ‘Come in! Come in!’”

As a college student on O‘ahu, he would march with his longboard through bustling Waikiki — past couples heading to dinner and revelers in high heels — until he reached the shore. There he’d paddle out to his own little floating party on the water.

“You can see the lights and action and hear the lu‘au drums, so it makes you feel like you’re part of the city’s nightlife.”

He notes that, in daylight, some surfers can be competitive and territorial. All that washes away in the dark, and nocturnal wave riders are often each other’s biggest allies.

He pauses before adding with a grin, “It also cuts down on your odds of being eaten by a shark.”

Night surfers, he explains, aren’t focused on busting the biggest air or nailing sharp cutbacks. Darkness dictates a different experience altogether. Performance is less important and all that’s left is to enjoy the ride.

Catching waves in the dark is a jolt to one’s senses; engaging those senses collaboratively becomes crucial. Surfers use the glow of a full moon or even flashes of light from passing cars to spot waves forming on the horizon, while the sound of a wave crashing in the distance hints at what’s coming next. A shift in the water or a bump under the board adds another clue to this inexact science.

Surfers use the glow of a full moon or even flashes of light from passing cars to spot waves forming on the horizon.

Because of these variables, night surfers tend to go for smaller waves than they’d choose in daylight. Australian big-wave rider Mark Visser is an exception. In 2011, he was towed via Jet Ski into thirty- to forty-foot waves at Pe‘ahi on Maui’s north shore. Lights built into his vest and board, plus a beam from a helicopter above, guided Visser along the monster wave face.

For the everyday nightrider, though, bigger isn’t necessarily better.

“With night surfing, I just want to feel the cold air and see the light on the water,” says Woozer. “It’s less about performance and more about enjoying the moment.” 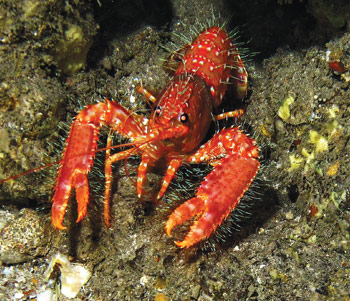 Traveling under water at night is like opening a doorway into another ocean. As the sun fades, a cast of underwater characters follows close behind, switching shifts with their diurnal neighbors.

“A lot of the stuff you see at night, you’ll never see during the day,” says Maui Sporting Goods owner Brian Yoshikawa. An avid night diver, he recently spotted a fish he’d never witnessed before, day or night.

“I’ve been doing this for forty years and I’ve never seen anything like it — not even in a book,” he says.

For Brian, night diving isn’t just about checking out the scenery. It’s a chance to chase down one of the ocean’s most prized nocturnal creatures — the Hawaiian spiny lobster. These crawling crustaceans hide in rocks and reefs during the day and come out at night to forage.

Free diving for lobsters at night is relatively inexpensive, compared to other forms of ocean hunting, Brian says. All you need is a wetsuit, gloves, a flashlight and a float system.

“With blue-water spearfishing, it’s going to cost you $3,000 for a complete setup, but with night diving you can spend $500 and you’re good to go — that simplicity is part of the appeal.”

At night, a diver’s light is paramount. Using the narrow beam as a guide, the first task is to spot the lobsters crawling along the ocean floor. It’s a skill that can mean the difference between a lobster fest and going home hungry.

“You have to know the grounds that the lobsters are more likely to be in; otherwise it’s game over,” says Brian, adding that divers are notoriously secretive about their hunting grounds.

The trick is to shine the light near enough to keep the lobster in view, but not so close as to spook the critter, then swim down and pluck it off the bottom. It may sound simple, but the skill is in the execution.

Everything is spookier at night—a floating piece of seaweed looks like an eel and every passing fish resembles a shark.

“You want to grab them from the back; otherwise you’re going to end up with two antennas in your hand — and every beginner does that,” says Brian. “It’s sad, because the lobsters need their antennas.”

To protect the lobster population, Hawai‘i fishing laws deem all females and smaller lobsters off limits. Because of their long gestation (up to a year), it’s also illegal to catch lobsters during the summer.

For many divers, being under water at night is a frightening scenario any time of the year. There’s the question of the unknown, of what else may be lurking in the darkness. Everything is spookier at night — a floating piece of seaweed looks like an eel and every passing fish resembles a shark.

The key, Brian says, is to keep calm.

“There are definitely sharks out there, and they know if you’re scared or on the edge,” he says. “We swim with sharks all the time, and you just have to remember to respect them, but don’t fear them.” 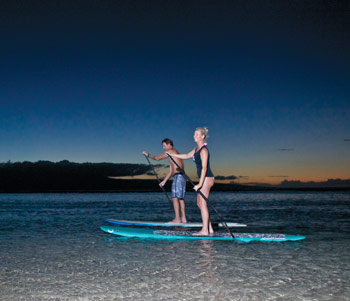 Ashley Akers waits for those few times each year when the conditions align just so — a perfectly round moon turning the sky a few shades lighter, ocean currents so gentle you could skip a stone, and winds that barely move. That’s when she and a group of friends pack their standup paddleboards, headlamps and glow sticks, and head for the water.

Most nights they’ll cruise along Maui’s south shore, guided by the lights from area resorts. Every flick of the paddle transforms the ocean spray into beads of light that resemble the bioluminescent creatures swimming below. More than just handy landmarks, the buildings create a nighttime wonderland filled with familiar sights that are quite literally presented in a new light.

Being upright on a board presents a particular visual perspective. It’s a full immersion in nature, placing a person at the intersection of water, land and air. In that moment, she is in the space between the moon and the fish.

Ashley likes to bring snorkel gear along so she can glimpse the underwater action from the safety of her board. She admits that immersing herself at night isn’t on the agenda.

“I’m like a cat,” she laughs. “If I fall in the water I’m back on the board immediately.”

Standup paddling at night is as much about soundscape as it is about landscape: the rhythmic splash of the paddle, ripples passing under the board, and the hushed sound of one’s own breath.

For Ashley, who participates in the annual Naish Maui International Paddleboard Championships and OluKai Ho‘olaule‘a Stand Up Paddle Race, there’s nothing like the thrill of an SUP adventure after dark. It’s a chance to enjoy a familiar activity in a new way. Above all, it’s a relief from competition pressure, she says.

“It’s about slowing down, being still and taking in the environment,” says Ashley. “It’s not a race — it’s more like whoever has the most fun wins.”