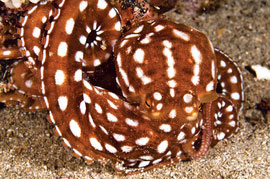 Sixty feet under water, my thoughts and breath become overwhelmingly loud. As I drop down into Molokini, a submerged, extinct volcano whose exposed rim recalls the crescent moon, I wonder what this marine preserve looks like now. It has been ten years since I dove amid Molokini’s coral reefs; earlier today I pulled my open-water certification card from its many-year hiatus and joined Ed Robinson’s Diving Adventures for a two-tank night dive off South Maui.

We are on our first dive of the evening, a twilight dive scheduled during the active transition between diurnal and nocturnal sea life, and a popular feeding time. Immediately upon descending, we encounter a manta ray that moves before us, ever so gracefully, as we crouch clumsily in the sand bed. While watching its flying-carpet-like body undulate above me, I make minor adjustments to my buoyancy vest, adding just enough air so that I can hover above the coral without bumping into and damaging it. Coral may look inert, but it is a living thing, the fragile backbone of an entire marine ecosystem. The imperative to protect it is behind 2008’s being declared the International Year of the Reef.

As the manta ray disappears into the dusk, a toothy barracuda swims by, hunting for dinner. Above me are the silhouettes of fish backlit by the setting sun; they look like the construction-paper cutouts of fish I made in kindergarten. Below me, others are a colorful kaleidoscope of movement: schooling, feeding and cleaning. A frogfish, looking like molded yellow play dough, haphazardly flings itself along a ledge, much to my delight. Butterfly fish with delicate snouts and parrotfish graze along the reef, eating the minute coral animals, called polyps, whose calcium exoskeletons make up the living reef. A baby white-tipped shark sleeps under a ledge, and as we turn to ascend after what seems like just a couple of minutes but is really forty, two more white-tips cruise past. The reef glows a muted pink, mauve, brown and pale green. To my untrained eye, all is well, at least in this sanctuary. Even in the fading light, this is one of the most spectacular dives I’ve been on.

Back on deck, we dry off, munching on deli sandwiches as the sun sets, and compare notes. Our expedition leader, Ed Robinson is a longtime diver and underwater photographer. I ask for his opinion on the health of the reef.

“I feel that overall, the reef is in good health,” says Ed. “My conservationist friends would argue with me. But I have seen the ocean cycle five or six times; areas seem to die off and then they come back and it’s wonderful diving. I won’t say that man doesn’t have anything to do with those cycles, but what man does barely touches the surface compared to nature.”  He references a level bed of sand near the reef. “It’s dead coral. It’s all from storm damage. Churned it up into nothing.” 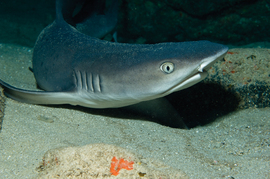 But over the last twenty years, the boundaries of Ed’s underwater playground have slowly tightened, diminished by external impacts of man and nature, or restricted by preservation legislation.

Russell Sparks, an education specialist with the state Department of Land and Natural Resources, is in charge of educating oceangoers on how to appropriately interact with the aquatic world. “Habitat destruction from land-based impacts is huge at all near-shore locations,” he says. And popular offshore fishing spots and dive sites may be strained by frequent recreational traffic.

“But the bigger concern is how ocean users behave,” says Russell. “Are they adequately educated to avoid stepping on living coral?”

Inexperienced divers may grab the reef to steady themselves, or accidentally kick a coral head, each brush a disaster to the delicate organism.

“If we see divers with bad buoyancy or abusing the reef, we step in,” he says. “It’s our responsibility to control it to some degree.” He laments the destruction he has seen caused by carelessness. “If the anchor drags through or is dropped on coral, it’s going to break it off.  [When] numerous boats go to the same place, it’s going to cause a lot of damage.” 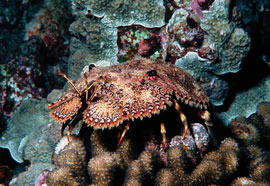 One solution is to place more substantial, permanent moorings in popular locations to provide a secure anchor for ocean craft, well away from vulnerable coral. In the marine preserves, boats are required to use moorings, but this is not mandated at other sites. Ed and other dive-boat operators have been instrumental in creating the Maui Reef Fund, which maintains twenty-six moorings and has proposed fifteen new ones.

While we’ve been talking, Ed’s boat has brought us to a site closer to shore for our night dive. What will the darkness reveal? I know that some fish, like the surgeonfish, school away in the ocean depths for nighttime safety. Perhaps this site will feel empty, with nothing to feed the predators but me! Apprehensive of sharks, I stick close to my dive buddy. The blackness reaches out to me and I feel buoyed by the unknown. At once anxious and enthralled, I keep my flashlight pressed inward against me, believing that if I can’t see “them,” then “they” can’t see me. Thus comforted, I follow my buddy’s light to the ocean floor. 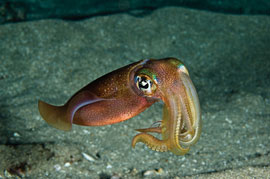 It is littered with spiny, briny things: I recognize lobsters galore—at least two different species. Collections of eyes on stalks, luminous shells, blue, red, beady and lumpy bodies, furtive movements and claws court our circle of light. Their glittering attributes, shapes, sizes and movements amaze me. I will learn later that what we’ve been looking at are shrimp, crabs and even nudibranchs (sea slugs). The coral is also in full blossom, extending rainbow limbs up to snag small shrimp and zooplankton.

Fish behavior is noticeably different than two hours earlier. At night, changes in color and pattern help fish hide from nocturnal predators; the parrotfish even secretes a mucus “cloak” that may mask its scent. Two large Moorish idols, known to mate for life, hover side by side, their daylight markings now muted. The butterfly fish have gone from white to yellow. Sleeping fish, lidless eyes wide open, drift slowly past or shelter in puka (holes).

Under a rock too small to completely conceal it, an octopus quivers, bright orange, glowing like a very shy light bulb. Ed comes over with his camera, and as we encircle it, it dashes out and around its rock, seeking better cover. Turning around, I encounter a humongous eel, its head sticking out of the coral. Hypnotized, I watch its slithering body, watch it snapping its mouth as if in discourse with me. Its length entwines back through the reef, half hidden until I swim directly overhead. 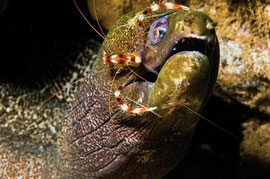 Those species that haven’t gone to bed peck like chickens in the sand or cruise independently about. As a whole, nocturnal fish tend to be reddish (the best color for blending into the dark ocean) and sport enormous black eyes. Some of these fish also have “drive by” attitude, dropping in from nowhere with a burst of speed and getting right up in my mask. Sometimes I don’t know who is startling whom.

As we paddle our way up to the boat through bioluminescence, each stroke sparkling, I feel like a nocturnal marine creature myself, at one with the infinite darkness. I haul myself back aboard, regretfully leaving behind a wondrous underwater world, very much alive and vibrant.

2008 The International Year of the Reef

This worldwide campaign aims to raise awareness about our valuable coral reefs, the threats to their sustainability, and the impact to associated ecosystems. Throughout the year educational forums, ocean-focused celebrations, and active cleanup projects will be held to promote coral reef conservation.

To volunteer in beach and reef cleanups, fish counts and other marine projects, visit www.iyor-hawaii.org.

The Maui Reef Fund was created as a way for ocean recreation participants to give back to Maui’s coastal environment. To learn more, or to contribute, contact: