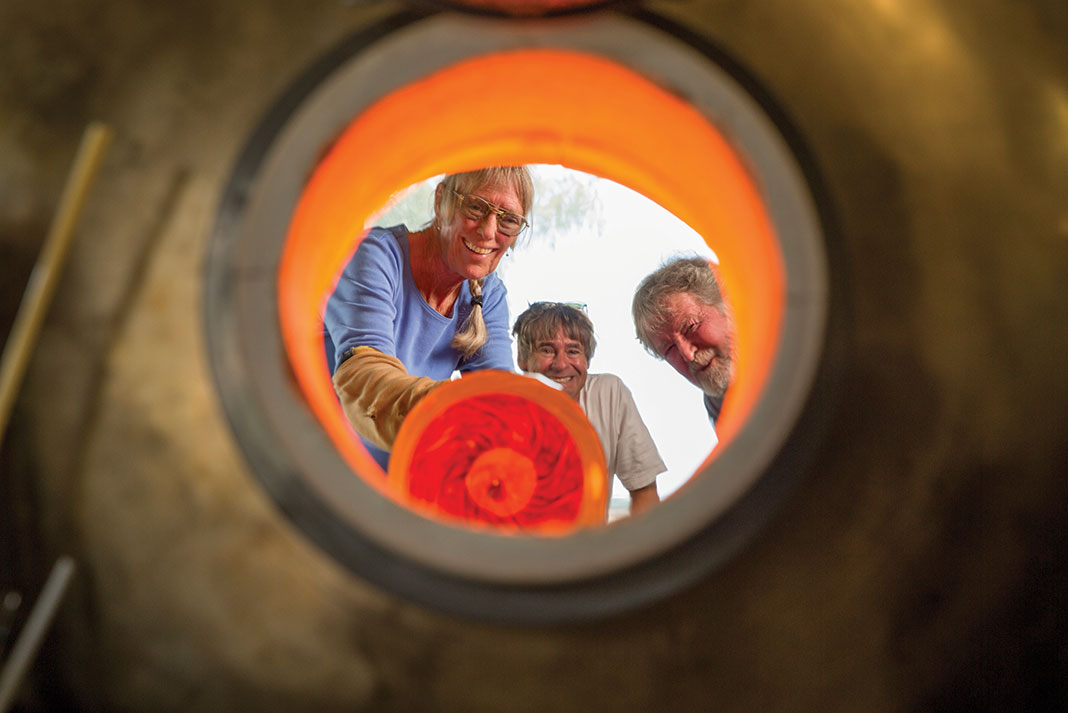 “What happens with glass, it’s so instantaneous. It’s a turn-on material,” says Bill Worcester. To prove the point, he offers me a lesson. “Get ready to be seduced,” he warns.

My classroom is a high-ceilinged steel building, just up the road from Morihara Store in Kula. Two furnaces are cranking at 1,900 degrees. The first holds a clay-lined pot with molten glass that Bill gathers on the end of a blowpipe. Once the hot blob is stuck to the pipe, gravity demands constant rotation, otherwise the glass will sag and droop like honey on a knife. And then it’s a dance: shaping the glass till it starts to cool too much; placing it in the second furnace, called the “glory hole,” where it reheats to a workable temperature; time at the bench to inflate the piece with long puffs of air, or to change its shape with tools that cradle, punch, or pull; a turn at the color station to add flecks of blue powder to the hot glass; and back to the first furnace to gather another layer. Repeat as necessary. Hours later, my simple paperweight slowly cools in the annealing oven. A few days later I have a session in the “not hot” shop to grind the bottom flat.

Thanks to my expert tutor, I have a small round object with strands of aqua blue and my breath captured inside, and even more curiosity about the history of glass on Maui.

Nearly fifty years ago, Bill Worcester peered out at giant sea fans from a tiny submersible 1,200 feet below the surface. What he couldn’t see from that porthole was that his life as an oceanographer was about to change, thanks to a studio art movement that was developing in Honolulu. Bill gained access to a “funky” glass furnace and was hooked. His wife, Sally, soon joined the action. A path once focused on the mysteries of the ocean shifted to creations formed from a very different kind of liquid.

After building a studio in Oregon and later launching Hot Island Glass in Makawao, the Worcesters came home; their current studio lies mere steps from their house. Their son, Mike, made his first glass sale when he was just seven; he rejoined the business in 2005 after running his own shop in California. Today, Worcester Glassworks is truly a family affair.

What inspires these artists individually, and what’s it like working together?

Sally tags Mother Nature as her muse. “It might be a group of colors in the desert or plants that have arranged themselves in a color pattern,” she says. Her technique, though, is based on physics and chemistry. She uses the “tri-hue” method, taught by Maui artist Dick Nelson, which employs only the three colors used in printing — yellow, cyan and magenta — to make any color of the rainbow. Sally has adapted what began as a watercolor method into “painting on glass.” Each gather from the furnace and addition of powder creates the desired colors: the viewer will see green on the portions of the “canvas” where Sally has added yellow to a base layer of cyan. Her finished piece might have thirty layers of colored glass and include a hundred stops at the glory hole. In what Bill and Mike call her “Monet” pieces, Sally’s successive placements of colored powder appear as short, fluid brushstrokes on the surface, while clear layers and variations in density make light a central component of the work. “Glass and light are the best friends in the world,” she says.

Several years ago, Sally was attempting to create a glass ipu, or gourd. One trial piece languished in the garden for several months, until Bill sandblasted the surface. The result was so organic looking that local art jurors thought it was stoneware. Art Maui featured the gourd on its annual poster and the State Foundation on Culture and the Arts purchased it. A new direction opened for Sally and Bill with Hawaiian-themed ceremonial vessels.

Son Mike says he learned glassblowing “by osmosis.” His passion for the ocean (and surfing) inspires his shell- and wave-shaped pieces, and also infuses the way he plays with surface and color. “At sunrise or sunset you get these great colors that dapple on the wavelets,” he says. Spot additions of color mimic the fine markings of a fish. He captures the wrap of swell lines around the island by carving into the glass. Lately, he’s working on a ripply look, a view of the ocean from below, with foamy layers of blue and green and the sense of a surface worn down by waves or hands. “I want people to pick these things up and feel them,” he says.

After forty-seven years of active production, Bill describes his current role as a “glorified janitor.” Sally and Mike protest, pointing out recent sales of Bill’s art, but agree that his technical know-how and inventiveness keep the shop humming. Bill’s creative influence remains very much part of the mix as the three share critiques. “It’s a perfect symbiosis,” says Sally. “We help each other to grow and discover new things about ourselves, the world and the glass. If someone had told me when I was a child [that I would be doing this], I would have thought it was a fairy tale.”

Worcester Glassworks is open Monday through Saturday, 10 a.m. to 5 p.m., and Sundays by appointment — but call ahead. When the furnace is on, you can watch glass in the making. 4626 Lower Kula Road, Kula | 808-878-4000 | WorcesterGlassworks.com

Medusa-like chandeliers and giant jellyfish hang from above, while iridescent vases and mosaic art pieces fill the shelves and walls of Rick Strini’s studio. The light-filled building faces into trade winds on a bluff above Ha‘ikū’s north shore, an apt setting for the man who forty years ago sailed to Maui on a trimaran he had built. That self-reliance and willingness to explore new territory may be the genesis for the riot of color and fanciful forms that emerges from the Strini furnaces.

Ceramics was Rick’s first medium, but his kiln work shifted after he saw his brother working with glass. “The way I do glass,” he says, “is old school,” keeping six colors hot at all times, each in a separate crucible in the furnace. “Most other artists use clear glass and pick up bits of color that are cold,” using powder, chips or bars, but Rick prefers the evenness he gets from layering with hot colors.

“Old school” also captures his reverence for early glass masters. One of his signature styles is luster glass. More than a century ago, Louis C. Tiffany and Frederick Carder separately perfected an iridescent finish by treating molten glass with metallic oxides. Rick says the “hugely complex” process almost disappeared because only a handful of people knew all the steps. After ten years of trial and error, he mastered the technique, which requires exact weighing of the elements, getting proportions correct, and proper melting and handling. He eventually sussed out adding a luxurious green to his palette of blue and gold lusters. He still loves working with it. “When it comes out good, it’s unbelievably sexy.”

Still the explorer, Rick continues to develop new responses to changing environments. “I had a huge market on the mainland for seconds, pieces with a slight blemish,” he says. It’s a market not present on a small island like Maui, so he started “upcycling” — making something from the residual glass left after a piece detaches from the blowpipe. He liked the effect so much he started making and cutting up glass to create new pieces. This multiphase approach shows up in his wall art, door panels, and even a sink. He first makes a rondel, a blown piece spun into a circular shape. Once that cools, he cuts off the edges, arranging them in patterns with other pieces of clear or colored glass, and then fuses them together in his furnace. He then places the fused glass into or over a mold in a kiln heated to 1,500 degrees; the glass softens and “slumps” into the finished shape, perhaps a bowl or lamp. Remains from the rondels find new life as tile elements in wall art.

Today, more than 90 percent of his work involves “intentionally lit” pieces. He’s always thinking, “How’s it going to look with light on it?” Some of his massive chandeliers are complex creations, with colored forms tied together onto an iron framework. His lamps, wall sconces and chandeliers help set the tone and ambience of numerous Maui restaurants, including Mama’s Fish House and Bistro Casanova.