For ten years, from 1994 to 2004, our family made the Sunday-night trek to Tokyo Tei Restaurant in Wailuku. It was comfort food and familiar service. In fact, we were such regulars that unless we brought a guest along, we didn’t need to place an order. It was the same every time: chicken katsu, pork tofu, and teriyaki steak. They also served the freshest sashimi.

Whenever we entered Tokyo Tei, it felt as though the owner, Eunice, was throwing me a life vest: husband Chris and I had two grade-school children, and a combined workweek of 120 hours — me tending to our café in Ha‘ikū, while he worked in the culinary program at UH–Maui College.

We all need a reprieve from the daily grind, sans cell phones, e-mail and other modern-day distractions. Here are some of our favorite family restaurants: 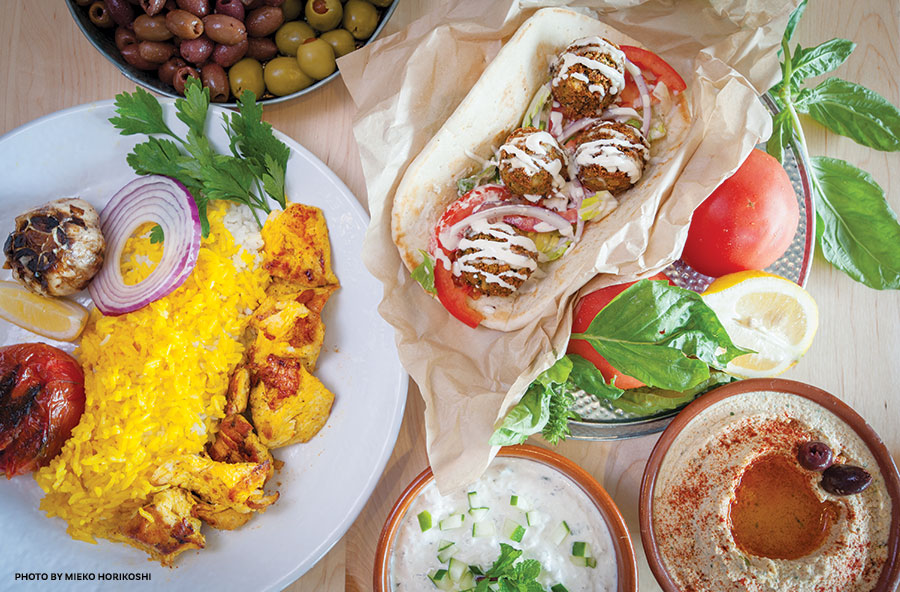 Chef Paris Nabavi strives to satisfy your every ‘onolicious desire with his 2017 Gold ‘Aipono Award-winning menu for best Mediterranean fare and Silver ‘Aipono-winning best pizza. Chef Nabavi imports traditional herbs, spices, and even aromatic, ground Persian lime to create traditional dishes such as baba ganoush, a fire-roasted eggplant purée for slathering on flatbread; and crispy falafel stuffed into soft, warm pita with yogurt-tahini sauce and fresh veggies. Saffron chicken kabob plates overflow with sides such as tabbouleh: a lemon, garlic, and olive-oil-infused cracked-wheat salad with tomato, cucumber, mint and parsley. The menu includes kids’ pasta selections and generous pizzas, but it’s the Mediterranean food at Pizza Paradiso that rocks my world. They even cater!

POI BY THE POUND

Three years ago, CJ Ho‘okano opened Poi by the Pound in Kahului Industrial Park. This spring, the restaurant moved into the former Denny’s Restaurant on Hāna Highway, and has become Maui’s go-to spot for real Hawaiian lū‘au food and killer plate lunches.

When I visit the restaurant, my eyes widen as a plate lands in front of me, laden with grilled, garlic pork sausage — homemade, of course. “Wow!” I exclaim. Brandee, CJ’s daughter and restaurant manager, smiles and says, “Yeah, we give generous portions.” The Hawaiian plate, with its lau lau, kalua pig, lomi salmon, poi, and chicken long rice, could feed half my family, although some diners have been known to eat the whole thing in a single sitting. For dessert, try tender taro garnishing a haupia (coconut) ice cream sundae topped with caramel, chocolate sauce . . . and poi. It may be your first, but it won’t be your last! My advice: Go with a huge appetite after a day at the beach. If you can’t make it to the restaurant for a taro kick, you can purchase CJ’s kulolo, a dessert of baked taro, coconut and brown sugar, at Pukalani Superette, Mana Foods, Down to Earth, and Times Supermarket. So ‘ono!

This hidden gem won the Silver Award for best Mexican fare at the 2017 ‘Aipono Restaurant Gala. The reason may be the generations of Benitez family recipes that make up the muy bueno offerings. Start with queso fundido con chorizo: melted cheeses, sautéed onions and house-made chile pork sausage served with a basket of warm flour tortillas. Pair it with a fresh lime margarita and you are on your way to Old Mexico. ¡Arriba! Grandma’s secret chicken mole artesanal roja recipe, with twenty-five sauce ingredients, migrated across the border; today the exotic, long-simmered chile sauce blankets a tender, poached chicken breast, served at Roasted Chiles with rice and tortillas. Langostino enchiladas topped with creamy verde sauce come with refried beans and rice — a must-try! Save room for the sweet Kula corn cake with dulce de leche. (No room in the tummy? Take home a slice or two to enjoy in the morning with your coffee.)

Okay, so you have the towels, umbrella, cooler, sunscreen, spouse, children and dog in the car and you’re on the way to the beach. You haven’t packed lunch because, hey, it’s your day off, too! Besides, everyone wants different cuisine. Head to Azeka’s, and problem solved. In this one shopping center, you can get crispy vegetarian Thai spring rolls and peanut-studded green papaya salad from Nutcharee’s (2017 winner of ‘Aipono’s Silver Award for best Southeast Asian cuisine); a plate lunch of Korean shoyu-glazed short ribs, mac salad, kimchee and hapa rice at Nalu’s South Shore Grill (2016 winner of ‘Aipono’s Gold Award for best new restaurant and 2017 ‘Aipono Silver for best breakfast). Head to Ono Gelato/The Maui Sandwich Shack for a New York-deli-style pastrami stacked high on marbled rye with pickles and coleslaw, and a pint or two of that frozen dessert whose name is Hawaiian for delicious. Gotcha covered!