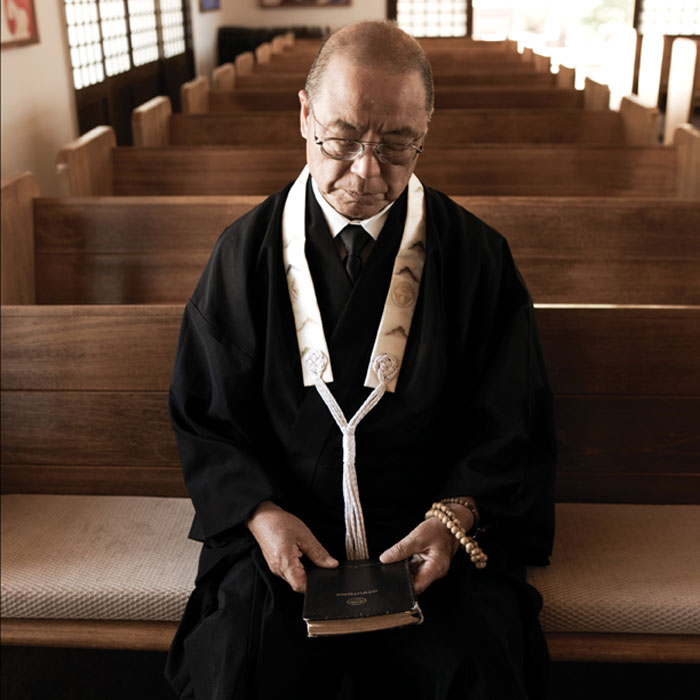 This is Maui’s first Christian church, established by Keopuolani herself—the sacred wife of Kamehameha I and mother of his heirs. She was considered a living goddess whose spiritual authority resulted from generations of brother-sister matings that had concentrated the sanctimony of her lineage. Months after her warrior-husband died, Keopuolani instigated the overthrow of the kapu system that had governed Hawaiian culture for more than a millennium, essentially nullifying her own high status. When the first missionaries arrived at Kailua Bay (Hawai‘i Island) several months later, she and her subjects were waiting for their instruction. In 1823 the queen brought two of these early missionaries—William Richards and Charles Stewart—to Lahaina, to this spot, and said, in effect, “Build here!”

Originally called Waine‘e, the church stood on the shore of a small lake in which dwelt a mo‘o, a water spirit, the deified form of the queen’s own ancestress. Thus, this piece of land was the queen’s pre-Christian power spot, and the decision to plant a church there must have been fraught with implications.

Keopuolani died about nine months later. In the end she entrusted her two small children, boy and girl, to the care of the missionaries, and she became the first ali‘i (royalty) to receive baptism and a Christian burial. Stewart returned to America, but Richards stayed his whole life, helped write the kingdom’s first constitution, and served as ambassador to the United States. He is buried in Waiola Cemetery along with many other important figures from these turbulent years.

The little boy and girl grew up caught in a vise of tragedy. Deep tradition would have them wed; newfangled Christianity forbade it. In time the girl, Nahi‘ena‘ena, perished after giving birth to her brother’s child, which also died. Her grief-stricken brother, Kauikeauoli (or Kamehameha III) built a mausoleum on an island in that lake, adorned it with his sister’s personal effects, and placed the coffins of his mother, sister, and child there on a four-poster bed. From this place he ruled the kingdom for many years.

As sugar production robbed Lahaina of its natural water flow, the lake silted up (it is now a waste area and ballfield) and the mo‘o withdrew. Mighty winds destroyed the church four times. The last time the congregation rebuilt, they changed the name of the church from Waine‘e (moving water) to Waiola (water of life).

So far so good.

At one time, both Keopuolani and Nahi‘ena‘ena were interred next to the church, along with the sacred queen’s last husband, Ka‘umuali‘i, a great chief from Kaua‘i. A monument identifies their presence, although the actual remains were likely relocated during the reign of David Kalakaua. Recent efforts have been made to restore the lake and to tell the story of this, one of the most significant sites in all of Hawai‘i.

Blessed are those Maui travelers who wander just a little north from the Front Street razzmatazz to find this seaside temple. The experience is not at all like “going to church.” It is as if one has been instantly transported to the Pure Land—where nirvana is a guarantee, as envisioned by the Jodo sect of Japanese Buddhism—or else transported to Edo under the shoguns.

The twelve-foot copper-and-bronze statue of Amida Buddha is the largest of its kind outside of Japan. The pagoda, a traditional structure originally designed to house the cremated remains of the Buddha, stands ninety feet tall. Its roof is made of pure copper shingles, as is that of the main temple itself. The huge bronze bell (3,000 pounds) is the largest temple bell in Hawai‘i.

An inscription on the ocean side of the bell indicates that it commemorates a century of Japanese immigration to Hawai‘i. Knowing that the first (and unofficial) such immigrants arrived in 1868, one can surmise correctly that the bell was made about 1968. Same with the pagoda, the statue, and the temple itself.

Lahaina Jodo Mission has been active on or near this site since 1912. Its purpose—besides putting all people on the Eight-Fold Pathway to Righteousness—has been to bind and support Lahaina’s residents of Japanese ancestry and to perpetuate their culture in this faraway place. A fire in 1968 destroyed the mission’s temple and prompted the sublime reconstruction we see today. Fortunate is the traveler who gets to look inside at the many 1974 paintings by noted Japanese artist Hajin Iwasaki.

The traditional taro-growing region of Wailuanui, halfway to Hana, is no place to be tooling around in your Lexus. But the drive down from Hana Highway to the church is short and noninvasive.

There are two sanctuaries at this site. The smaller, white-stucco  structure dates back to 1860. It is one of the few stone churches in Hawai‘i that has a gambrel roof. This church was usurped in 1937 by the construction of the much larger shingled structure nearby, which then assumed the site’s official name, Saint Gabriel’s. The little original was rededicated as the Shrine to Our Lady of Fatima.

During the mid-1800s, Maui’s Christians were locked in a furious competition for souls. Protestant missionaries, who had arrived first, resented the Catholic priests, and for a time, Catholicism was criminalized on Maui. But the priests kept converting, especially in the hinterlands. In 1843 the Protestant mission in Hana sent a constable out to Kahikinui to arrest a group of native women who had taken Catholic instruction. The women were tied together and marched ninety miles to Wailuku. At every stop, more Catholic converts voluntarily joined, until the procession swelled to hundreds. When, a month later, the mob reached Wailuku courthouse, the judge dismissed all charges. Catholicism was here to stay.

So it is historically interesting to visit Saint Gabriel’s, built the same year as Ke‘anae’s Congregational structure. As the story goes, when the Catholics needed stones for their little white-stucco church in Wailua, God sent a storm that washed building materials to them from a Congregational church-building site. Hence, the Shrine to Our Lady of Fatima is also known as “the miracle church.”

German-born Father James Beissel came to Honolulu in 1879, the same year Portuguese immigrants began arriving to work Hawai‘i’s canefields. Three years later the priest found himself on Maui, responsible for an enormous district stretching from ‘Ulupalakua to Huelo. Residents included many of these new Portuguese—fervent Catholics—who, having  satisfied their labor contracts, were starting to farm and ranch their own plots. The Portuguese were hardy and determined; Beissel was a community organizer with moxie. Soon Catholic churches were popping up all over Upcountry Maui. The prettiest by far was Holy Ghost.

Built in 1895, this is the only eight-sided structure we know from nineteenth-century Hawai‘i. Some say the octagonal shape mimics a crown belonging to the saintly fourteenth- century Queen Isabel of Portugal. We don’t know. It is obvious, though, that the builders, working under the direction of foreman Jacinth Souza Medeiros, were inspired. The acoustics under the bell of the church’s interior dome are sensational. The stations and altar constitute one of Hawai‘i’s greatest art treasures. Created in 1895 by the famous artist and woodcarver Ferdinand Stuflesser in Tyrol, Austria, the works were shipped round the Horn and hauled here by oxcart from Kahului.

In the early 1990s, the parishioners succeeded in giving this structure and its art pieces a complete (and costly) restoration. Holy Ghost is now listed on the National Register of Historic Places.

Each year at Pentecost, the community gathers for the two-day Holy Ghost Feast, a highlight of which is a free laulau meal for anyone who attends. This meal perpetuates a tradition started by Queen Isabel herself. Suffering from drought, her people prayed to the Holy Ghost and were answered with a shipment of relief supplies. In gratitude, Isabel carried her crown in procession through the streets of Lisbon to the cathedral altar, then served the people from her own table.

A Buddhist minister named Hojun Kunisaki landed on this strange foreign island called Maui in 1898. His countrymen had begun immigrating here, and by 1898 they were arriving in droves. These Japanese nationals were coming for work, pure and simple, but Kunisaki was interested in certain other vitals—culture, community, and compassion.

Kunisaki traveled on horseback over the greater part of the island, working to establish centers of Buddhism in the denomination known as “Jodo Shinsu Hongwanji-ha.” (The name derives from the denomination’s main temple in Kyoto, Hongwanji.) This is a form of Pure Land Mahayana-style Buddhism, a very accessible, devotion-based practice that has always appealed to commoners and outcasts. Kunisaki established his very first mission on the corner of Wells and Market Streets in Wailuku. The congregation relocated to the present structure on Vineyard at the end of World War II. The Wailuku Hongwanji Mission is celebrating its 110th year of continuous activity.

One example of the public good done by these mission members: to help rescue some old-timers displaced by martial law during the war, they raised funds, salvaged lumber, and built the first Hale Makua—today one of the largest and best long-term-care facilities in the state.

Wailuku Hongwanji includes a preschool, a Boy Scout troop, a 4-H program, and a full calendar of social and learning events. Far more than a church (in the only-on-Sunday sense), this and all such sites established by Rev. Kunisaki function as vibrant community centers. They can be credited with the extraordinary cohesion of the island’s Japanese—rooted in the past though speeding away from it faster and faster with each generation.

Standing almost alone against the backdrop of wind-whipped sugarcane fields that descend for miles to the glittering blue sea, this late-Gothic-revival stone church is a true car-stopper. There is an Old World mastery to the   cutting and fitting of the uniformly brown stones and the dark slate roofs. If you can get inside—as many people do by attending secular music events, for the acoustics here are some of the best on island—you will be further impressed by the lovely circularity of the seating design, the brilliant stained-glass “sermons,” and the carved-oak details. This church is a masterwork of the great Hawai‘i architect C.W. Dickey, designer of the Wailuku Public Library, of Kaluanui Estate (a mansion that is now Hui No‘eau Visual Arts Center), and of Maunalei (or “Cooper House”) at Seabury Hall, among notable others. The structure is listed on both the Hawai‘i and the National Register of Historic Places.

The church’s history goes back half a century before the building itself. In 1861 King Lot Kamehameha chartered the “Makawao Foreign Church and Congregation” to worship in a small wooden building near the old Makawao cemetery. Services were in English (hence, “foreign”). Its founder was a missionary, Rev. Jonathan Green. A leading member of the congregation was the son of another missionary; Henry Perinne Baldwin, cofounder of Alexander & Baldwin sugar company, served as the church organist for forty years.

In 1888, “H.P.” offered the church a better site—the solid foundation of a defunct sugar mill that had been constructed exactly where the church now stands. The congregation first built a white, wood-frame, New England-esque house of worship atop the old foundation. But after Baldwin’s death in 1911, his family chose to construct the grand stone structure and dedicate it to the memory of this pioneer of Maui agribusiness.