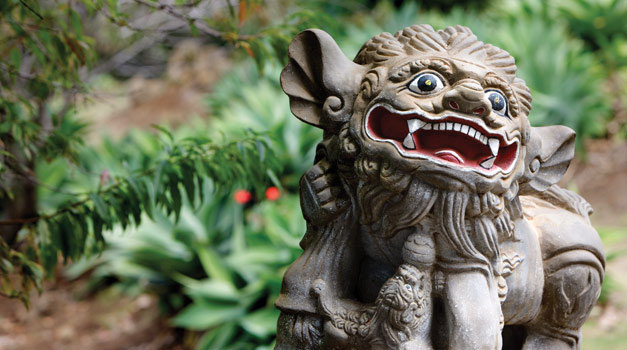 The stout breeze rushes like a river across the top of this knoll in Keokea. I’m standing among time-pocked concrete gravestones, many of them cracked and scoured to the point of illegibility. New markers in crisp granite bear the names Ching, Chung, Fong, Hew, Zane, Shim, Lee, and a few others. These families’ honored ancestors have been getting interred here for two hundred years—beginning shortly after Captain Cook’s landfall and well before the coming of the New England missionaries.

The wind is surging down Haleakala through the dark canopy of Polipoli Forest, clotted with clinging fog. Then it glides across this hilltop place known as Fook On Tong Cemetery. From here the wind toboggans on down more than 3,000 feet to Maui’s central valley as if intent on shooting right up the face of Mauna Kahalawai, the island’s western mountain. This obscure resting place, bounded by cabbage farm and barking hounds and a road that almost no one travels, this is the true heart of Maui’s Chinatown.

Yes, Maui has a Chinatown. But don’t expect to stop somewhere for dim sum. This trip is 80 percent a journey of the imagination.

The trek up Haleakala Highway through Kula usually feels like a straight-ahead commuter’s shot—no dawdling; get back home to country quiet after a day down below on the job. But there comes a point at which, after most of the traffic has peeled away left and right, the road quiets and shifts from Kula to Keokea. It narrows. You see people pulled off the road, engaged in the futile task of trying to capture the view with their little cameras. You see plein-air painters with their easels and umbrellas set up. From here, West Maui and Lanai look toe-to-toe, Molokini cuts the sea like a scimitar, and red-hided Kahoolawe simmers on the horizon. Snorkel boats to Molokini are aphids. Occasional firework displays at the Wailea resorts are smaller than dandelions and way out of sync with their booms.

I stand on the Keokea roadside, studying the eight miles of parched volcanic ranchland that’s tilting between me and the sea. I’m in the same ahupuaa (traditional Hawaiian land division) as Kihei, but by god I don’t feel like walking all the way down there. And yet the early Chinese settlers up here made that trip all the time. In the 1840s they used mule power to draw wagonloads of potatoes down to waiting three-masted clippers that sailed those spuds to hungry gold-rush miners in California. And the clippers brought back those miners’ dirty Levi’s for hand laundering. In those days people called this part of the island “Nu Kaleponi” as in New California. As I look down at the long architectural spangle of present-day Kihei and Wailea, I suppose that the term was prophetic.

The Chinese began settling Maui almost as soon as the westerners did. The earliest were skilled carpenters traveling with cross-Pacific ships such as those that transported native sandalwood from Hawaii’s forests to Canton. Then entrepreneurial farmers came to make money growing taro and rice. Maui’s first sugar mill started in 1828, just nine year after the death of King Kamehameha, launched by two men named Ahung and Atai. 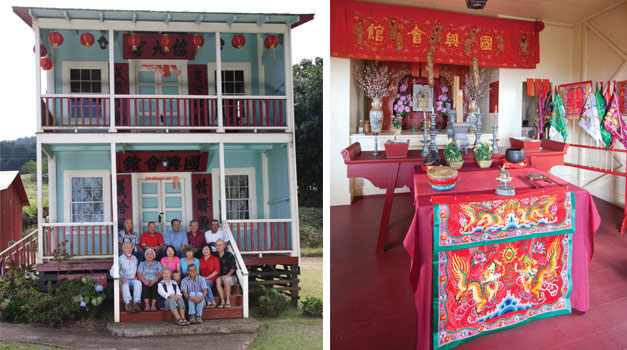 Most of these Chinese came from the Pearl River Delta region of southern China, near the worldly cities of Hong Kong and Macao, although these migrants were not city folk. They were destitute farmers of an ethnically distinct culture known as Hakka. Desperation drove them to pioneer in the uncivilized islands they called the Sandalwood Mountains. By 1900 some 700 Hakka Chinese lived up in this stony hillside wilderness, and that’s one-fourth of the total Chinese population then living on Maui.

Perhaps the closest I can get to these people is to pull off Kula Highway at Keokea town, which is no town at all, rather a cluster of winsome old features with Hakka roots. Two family-run stores here, Fong and Ching, still operate out of small wooden structures nearly a century old. Fong Store has the get-by staples such as ice, rice and charcoal briquettes. Ching Store, scarcely bigger than a wooden garage, specializes in chips, jerky, and the like, also soda pop and fresh-cut flowers—plus Keokea’s most popular attraction, the only gas pumps for miles around. Shy and dear Mrs. Florence Ching sits within, always ready to flick the gas-pump switches, daytime sporting events flashing on a small television she never seems to watch. Keokea town has other attractions—popular Grandma’s Coffee House, a tiny art gallery, a large county park. But right now I’m snooping into remnants of Chinatown, so I walk back up the road to St. John’s Church.

You wouldn’t suppose that a thriving Episcopal church called “St. John’s” could be pure pioneer Hakka made, but it’s true. This simple church house, a wee cathedral of skillful carpentry, owes its existence to Shim Mook, an immigrant Hakka with a mule-drawn hauler and a can-do attitude. In the late 1800s he wrote to his home village in China, saying that the children of Keokea needed a teacher. So the village sent a Lutheran minister, also a Shim, the Reverend Shim Yin Chin, in 1900. In 1907 the Keokea Chinese presented Rev. Shim with this masterfully handcrafted church. Shim Mook hauled its lumber all the way from Makena Landing. 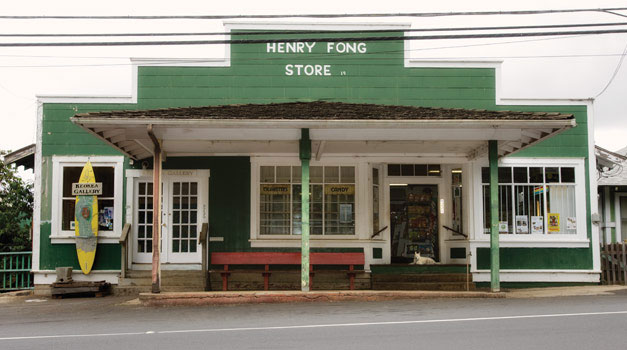 Water was scarce here. In drought conditions, people would carry water—via shoulder poles strung with five-gallon cans—from as far away as Makawao, which today is twenty minutes away by car. A single, clogged half-inch pipe delivered trickling mountain water to the sanatorium uphill from Fong Store. People would camp there overnight to fill their barrels. Then in 1905 Shim Mook organized construction of the Kula pipeline. He hauled twenty-foot lengths of six-inch-diameter pipe as high into the forest as his mule teams could climb. From there the Hakka residents carried them higher, as much as a half-mile uphill, two men or women at each end.

Think about that next time you’re staring up at those misty highlands while pumping your gas at Mrs. Ching’s store.

Click here to read the sidebar titled “The Hero Behind the Hero” to learn more about Sun Yat-sen’s brother, Sun Mei.

South of Keokea the road tightens to a rope-whip and waggles over the rocky range out to Ulupalakua. I take it as far as Sun Yat-sen Park, where this drive-by history lesson goes from local to global. The Hakka visionary who created modern China, who is venerated on both sides of the Taiwan Strait, the man who came out of nowhere (certainly looks that way from here) to fashion the first republic in Asia, used to hang out right near here at his older brother’s ranch. Maui people rarely stop here, and few realize that they are caretakers of a pilgrimage site for modern Asians.

Fewer still have ever seen the Kwock Hing Society Building. I drive back to Keokea and turn up what used to be called Old Chinatown Road, more like a cracked driveway than a road. Suddenly the little temple appears on a rise on the right, marked by a mossy Hawaiian-warrior tourism sign. The petite two-story structure—the first such ever built Upcountry—dates back to 1907, Shim Mook’s day. In fact, the resourceful Mr. Shim built the time-blackened but still solid old store, empty now, right next to the Kwock Hing. 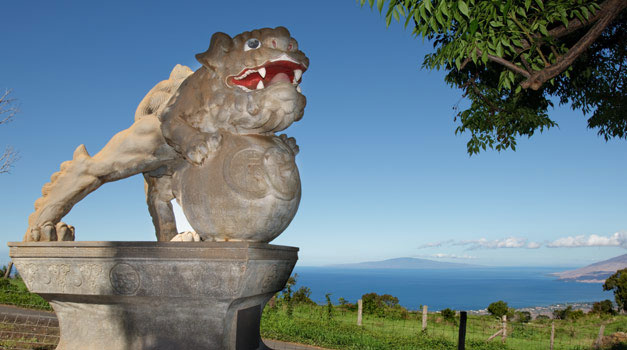 Societies such as Kwock Hing, each with its own temple-slash-clubhouse, formerly united pioneer Chinese communities throughout Hawaii. Maui once had six of these ornate and brightly painted structures. Today only two remain. A large one on Front Street, Lahaina, is now a tourist attraction. But this one in Keokea has never been retired as a curiosity. Today, more than a century after its founding, the Kwock Hing Society endures.

The building is usually locked, but today I’m in luck. Some of the area Chinese have gathered here to plan a big event—a lunch they’ll serve to a group of top-level Asian diplomats coming from Honolulu (delegates to APEC—the Asia-Pacific Economic Cooperation summit hosted by President Obama) to make a Sun Yat-sen pilgrimage. When they learn that I’m curious about their grandparents’ struggles to make a life in these hills, they sit me down and tell stories for three hours. I meet seventy-nine-year-old Richard Shim, grandson of Mook. He bristles with vitality and good humor (100 pushups a day, he says). He tells me that his grandfather had two wives, one Chinese and one Hawaiian, with two families, children with the same first name on both sides. “Kind of confusing,” he says, “but everybody got along.”

Richard’s cousin Marvin explains why the Hakka settled here. They were a displaced culture forced to migrate into southern China, and, being latecomers, had to learn how to farm on the rocky uplands, the less productive tilth of that region. In mountainous Keokea they recognized a similar terrain in virgin condition. “We’re all nomads,” says Marvin.

Indeed, nearly everyone at the Kwock Hing building today has spent a good portion of his or her life elsewhere, in Honolulu or on the Mainland. They too have felt that Hakka restlessness, the willingness to be “nomads” for the sake of opportunity. But they return, deeply loyal to the ancestors. They continue to revive the society and “keep the tradition alive.” They assemble for major festivities at least four times a year, especially the Ching Ming in April, when they bring food over to Fook On Tong Cemetery to picnic with the ancestors.

What began for me as a historical drive-by has suddenly become actual and real. The story of Maui’s Chinatown is far from over.

They invite me to join the Kwock Hing Society. Me, an Irishman? Someone quips, “Just drop the ‘d’ from your last name, Wood. You’ll be a ‘Woo!’” Everyone laughs.

Honestly, that would be an honor.