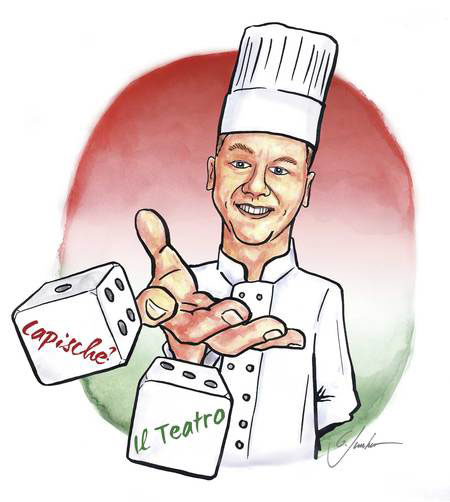 A graduate of Hyde Park’s Culinary Institute of America, Chef Brian Etheredge cooked in several East Coast kitchens before moving to Maui. By 1998, he was scaling the corporate ladder at the Grand Wailea Resort, quickly ascending from “cook four” to sous chef. He joined the Capische team in 2001, and assumed ownership of the restaurant at the tender age of twenty-five. It was a big financial risk for a young chef—particularly when he moved Capische from Ma‘alaea to its current location at Wailea’s Diamond Hawai‘i Resort. The gamble paid off; almost immediately Capische began collecting loyal fans and accolades for its intimate setting and thoughtfully conceived Italian dishes. Etheredge’s latest venture, Il Teatro, where the chef cooks tableside for ten lucky guests, is one of Hawai’i’s most exciting culinary experiences—a must for touring foodies.

Prior to learning that he’d been voted Chef of the Year, Etheredge said this about the award: “It is important to have the respect of your peers. In our kitchen, everyone is called ‘chef.’ To be voted Best Chef . . . is probably one of the greatest honors you can be awarded. Maui’s James Beard Award, so to speak.”

Congratulations to Brian Etheredge, our 2008 Chef of the Year!

What his peers say about him:

“Brian has worked very hard to build his restaurant from the ground up. Only a handful of people survive in this business, and he should be recognized.”

“Chef Brian is talented, motivated, and ambitious.” Meals at his restaurant are “creative and well executed” and “consistently excellent.”

“An influential culinarian, especially with his recent endeavor, Il Teatro.”