Unfortunately, wilderness and commercial enterprise don’t necessarily mesh well. Maxed-out parking lots, trouble on the trails, and a recent fatal collision between a biker and bike van spurred park Superintendent Marilyn Parris and her team to buckle down on commercial activity at the park—pleasing some park users and alienating others.

A tall, imposing woman with a deep, gravelly voice, Parris has decades of park management under her belt. She left her most recent post at Lassen Volcanic National Park in California to take the reigns at Haleakala in October 2005.

“When I got here, I thought, ‘This is a mob scene,’” says Parris. “The park had turned into Disneyland, and the summit is one of the most sacred places to Hawaiian culture.”

Haleakala was among the first sites designated for preservation when Congress established the National Park Service back in 1916. Today, Haleakala National Park is a tremendous natural and cultural resource: 34,294 acres of public land, including 28,819 acres of wilderness.

According to myth, it was from Haleakala’s wind-swept mountaintop that the demi-god Maui snared the sun, slowing its progress across the sky. Hawaiian-language professor Kiope Raymond says that early Hawaiians traveled here to worship, practice kilo hoku (astronomy), and gather pohaku (stones), medicinal plants, and fresh water during times of drought. While many of these traditional practices continue, today they take a back seat to modern pursuits, namely tourism. 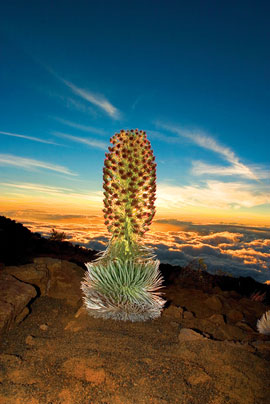 Do tourist activities overshadow or enhance Haleakala’s significant resources? Park staff sought to answer that question when they embarked on a Commercial Services Plan (CSP) in 2006. The results will decide which activity companies continue to receive permits to operate in the park. The CSP’s comprehensive evaluation will determine if, and to what degree, commercial operations are degrading natural and cultural resources, negatively affecting visitor experience, compromising public safety, or portraying messages inconsistent with the park’s mission.

Park rangers have plenty of reason to suspect that those things are happening. Sunrise on Haleakala is a heavily advertised attraction. Thirty to forty cars are turned away daily; commercial vehicles fill the parking lots to capacity. “Traffic got to be just gridlock,” says Parris. “If there had been an emergency, an ambulance couldn’t have gotten up here.” The superintendent opted to restrict large tour buses from the park while the CSP team analyzes their impact on traffic.

Deeper inside the park, Keonehe‘ehe‘e, or Sliding Sands Trail, is beginning to look more like Sliding Sands Highway as it widens inch by inch to accommodate both hikers and horseback tours. Hikers seeking to bypass tours or escape the smell of manure regularly step off the trail, onto loose cinder, where they unknowingly trample endangered plant roots and rare, hidden insects.

“You look around at the summit and the soils have just been pulverized,” says Parris. “A cinder trail is a very fragile resource. It’s going to take hundreds of years to remove footprints and [unauthorized] trails.”

Some blame the horseback tours for increasing erosion. Doug Smith, who owns Pony Express tours, sees it differently. “Storms and shortcutting hikers have done more damage than horses ever could,” he says. “Had there not been horses here for the past twenty-five years, Sliding Sands would look the same as it looks today.”

Smith also contends that his company offers unique benefits. “We take people who probably otherwise wouldn’t be able to make the trip,” he says. The four-mile trip descends 2,500 feet from the summit to the crater floor and back. The alternative to horseback is hiking—a challenge considering the steep grade, high elevation, and reduced oxygen.

“It’s difficult to climb back out on foot,” says Smith. “The horse changes all of that.” In his opinion, viewing Haleakala from the crater rim doesn’t compare to actually traversing Keonehe‘ehe‘e and viewing it from inside. “It’s is a whole different experience. It’s incredible.” As for the nuisance of horse manure? Smith says tours pay $5 per horse per trip to fund a park employee to remove manure. With eight to fourteen trips per week and ten horses per trip, that’s a chunk of change.

If Keonehe‘ehe‘e shows signs of wear, overall visitor experience is downright threadbare. Virginia Tech assisted with the CSP’s social research component, surveying park visitors. The results were sobering. “Forty-nine percent of the people surveyed one morning said, ‘I wouldn’t come back. It was too crowded,’” says Parris. “That’s unacceptable for us.”

Meanwhile, tour operators claim that they provide valuable services—educating and supervising visitors, for instance. “People on their own may spend fifteen to twenty minutes at the top parking lot,” says Smith. “They go, take a look, get back into their car, and drive back down. People who ride with us spend hours up there. They devote more time to finding out what Haleakala is all about.”

Of all the commercial activities, downhill biking has drawn the most fire. Over twenty-five years, the industry has grown from one to seven companies that annually usher 90,000 bikers down Haleakala’s panoramic exterior slope. Serious traffic accidents, squabbles over county-required insurance hikes, and debates whether guided or “self-guided” tours are safer have kept downhill bike companies in the news.

The debates came to a head last October, when a female bike customer was struck and killed in the park by a second bike company’s van. Parris immediately instituted a “safety stand-down,” and suspended bike tours within the park for sixty days.

Two downhill bike companies, Maui Sunriders and Haleakala Bike Company, conduct van tours of Haleakala and begin “self-guided” rides outside park boundaries. They remained operational. Five other companies, those featuring guided bike tours within the park, were devastated. Some closed, others altered their routes, or hired vans to shuttle customers in and out of the park before boarding bikes.

A flood of letters to The Maui News praised Superintendent Parris for halting what many residents feel is a dangerous activity that doesn’t belong on a public road. Equally passionate letters decried the ban, saying that biking Haleakala was the highlight of their vacation, the tours were essentially safe, and the ban unfairly targeted small local businesses.

“It has caused enormous economic hardship,” says Phil Feliciano, owner of Cruiser Phil’s bike company. “A lot of people have been affected.” Not only bike companies but also the local restaurants that catered to the tours lost income and were forced to lay off staff.

Regardless, the ban was extended until February. During this time, a park committee, including Mainland specialists and a Maui County representative, analyzed the park’s bike operations as a whole. They were tasked with sorting through what Parris called “voluminous” data on biking incidents in the park. The Maui Bicycle Tour Association, composed of the five guided bike tour companies most affected, hired an attorney, who provided the committee with lengthy testimony in their favor.

The committee’s report, in conjunction with the CSP, will assist Superintendent Parris in deciding the fate of downhill biking. She’s said that she expects to make a final decision in early March.

Bike company owners have found the process extremely frustrating. “They just need to make a decision and move forward,” says Feliciano. “By sitting on this for 120 or 150 days, in essence, they’re hoping to put us out of business.”

While awaiting the outcome of the CSP, all businesses desiring to operate in the park applied for 2008 commercial-use permits. To do so, Feliciano says, bike companies had to reinstate their $3 million insurance required by Maui County. Plus, they had prepaid park entrance fees, to the tune of several thousand dollars apiece. Although they’ve been denied access, the park has failed to return their money. “We have all these expenses,” says Feliciano, “and we don’t have a business that’s operating.”

He hopes bike tours will regain access to the park, “whether it’s on limited days, or a with limited amount of people, or even limited companies.

“What irks me,” says Feliciano, “is that 99.9 percent of our customers are American citizens and that’s their national park as well. It’s not the superintendent’s national park.”

Amidst the controversy, Parris remains committed to the National Park Service’s mission. “Acoustic researchers say Haleakala is one of the quietest places they’ve ever tried to record,” she says. “That’s a value. That’s why people come to national parks—to escape the helter-skelter of daily life and get some peace and quiet. It’s hard to quantify those values, but that’s why national parks were established.

“This park,” she continues, “what we’re here to preserve and protect, is part of our national heritage. We, not just park employees, but visitors alike, have to be better stewards of that.”

Exactly what that stewardship entails may continue to be a source of contention as commerce seeks to find its place on the mountain.