At the Ritz-Carlton, Kapalua, a large, circular stone stands upended, its face carved in relief. A mo‘o, or guardian lizard, climbs its circumference, while around a central “portal,” a pair of human figures curl in fetal position, one facing up, the other down. The portal represents eternity. The figures are humans traveling to and from it, one in birth, one in death. Remarkable to find something ethereal as a metaphor in an element so substantial. Remarkable, too, to find a poet in its creator, Hoaka Delos-Reyes.

“Hawaiian art is a genealogy of past, present and future,” he says. “You grow up with the culture, but you don’t use it. Later it awakens in you. Remembering is the connection.”

A mason in the construction trade most of his life, Delos-Reyes came late to his Hawaiian roots and his art.

“My son came home and said, ‘Dad, can you make a poi pounder?’ I said, ‘What’s so hard about that?’ He said, “You can’t use power tools. How did they make things back in the day?’
“I drove around the island, talking to elders. Kupunas said it’s done stone on stone. I came home, asked my son, ‘Can I use a hammer to chip the stone?’ Couple weeks went by, and I made it.”
“It kind of looked like a poi pounder,” Maile Delos-Reyes, Hoaka’s wife, says wryly.
“My son said it sufficed for him, but for me it opened the door. I went to libraries, talked with people. One day a friend on O‘ahu said, ‘There’s a man on TV, on Spectrum. Go see him.’”

The man was George Fujinaga,  a Japanese-Hawaiian stone carver who was recognized as a living treasure by the State of Hawai‘i. Delos-Reyes became Fujinaga’s last student—and it almost didn’t happen.

“My friend went to see him, and said, ‘I have a friend on Maui who would like to come learn.’ Fujinaga says, ‘No. I don’t teach. Go away.’
“I call up a couple weeks later and say, ‘Try go see him again.’ My friend did. Fujinaga said, ‘What don’t you understand? No is no!’
“Months go by. I’m trying myself, making poi pounders using hammer, sandpaper. I call my friend again. ‘Please, just one more time.’
“The old man sees him. ‘You again? I tell you no, and you still coming! Boy, you really must love your friend to take this abuse. Okay. Have him call me.’
“I called. He told me to bring a poi pounder. I brought the best I had. He looks; first thing he says is, ‘You already made one. You don’t need me.’
“I said, ‘I want to know traditionally how to make it. I want to do and feel and understand for myself what they felt, the people of old.’
“He said, ‘You take time off, one week, and I will teach you everything I learned in sixty years.’ One week! It was old style: hard scolding, pay attention, don’t ask questions.  The week ends, I know how to do it. I walk away with a sense of pride.
“Now I want to know more about the stone. The stone started to shape me, not the other way around. There was more to the stone than you could possibly understand.

“When I talk to children, I say, back in the day, did the Hawaiians go to Ace Hardware and get chisel and sandpaper? How did they make the canoe and the surfboard? How did they build the house? They had stone tools. An adze, a ko‘i, different sizes, to chop down the tree, to shape it, stone grinders to smooth it out, to dig the canoe, to make the paddles, build the house, strip the bark. Stone sinkers for fishing nets. Underground ovens used stones. When you got hurt and ran to your mother, she took stone and mashed herbs to heal you. Stone fills the valleys. Stone is above us, in the planets. This is how Hawaiian art mirrors life and has a spiritual connection to the past: That which is above is below. That which is inside is outside.”

Hoaka shows me a pair of tools he’s made from ‘ohi‘a wood, cordage and stone—tools so beautiful, they are works of art. One is an adze, the other a war club. “Stone gives life,” says Hoaka. “Stone takes life.”

Stone fills his backyard. There are power tools here, too.

“There was a point,” says Maile, “when he went back to his teacher and said, ‘Plenty people tell me this isn’t authentic because I’m using power tools.’ George told him, ‘Tell them you have the knowledge, you have the stones and chisels. You can do. Those who question you, tell them, “If you can do it, sit down with me and we will do it together.”’” 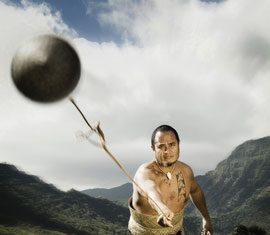 Wood and cordage, tooth and bone are used to recreate the ancient Hawaiian instruments of war. A modern weapons maker finds connection to a culture.