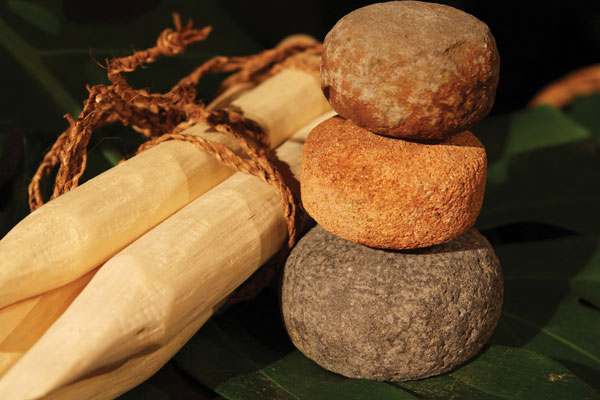 Each year, as the rains came and the Makali‘i, or Pleiades, appeared in the night sky, Hawaiians of old set aside time to rest, feast and play. The annual Makahiki festival began around the end of October or early November. There was no war or work during this four-month harvest holiday honoring Lono, the god of peace and agriculture. His image topped a banner of white kapa, fluttering from a crosspiece like the sail of the canoe on which Lono had left long ago, after teaching the people to farm. Priests carried the banner around the island, stopping in each district to collect offerings of food, kapa, feathers and gourds, tribute to the god as well as taxes for the high chief, the representation of Lono on earth. As the banner moved on to each district, the games began. People came from near and far to engage in a variety of athletic contests, dance the hula and feast on special foods like puddings made from kalo (taro) or sweet potatoes. As the long celebration of peace and plenty came to an end, the people filled a net with food, then shook it. If all the food fell to the ground, the coming year would be one of plenty.