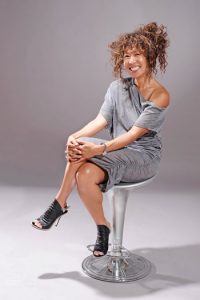 Maggie Coulombe dances around the studio as her models slip into one shimmery dress after the next. “Hot! So hot!” says the Lahaina-based designer, holding a sumptuous tangerine and ivory silk halter dress she finished sewing days before the shoot. Her right-hand man, Arid Chappell, sits on the floor, stringing Tahitian pearls into a luxurious floor-length lariat.

Luxury on the fly is a way of life for these two designers—islanders acclimated to the chaotic pace of fashion week in New York.

Toronto-born Coulombe graduated from Ryerson’s School of Fashion, where she was named Designer of the Year. She created leathers and suede for musician Jeff Healey and worked as a designer in Vancouver’s film industry. In 1995 she fell in love with local restaurateur Louis Coulombe and relocated to Maui.

Maui may have been paradise, but it was missing something: fashion. Not one to sit on her hands, Coulombe accepted jobs altering designer clothes.

“I got to know all of the socialites on the island,” she says. In 2000, she decided the time was ripe to launch her own line. So what if Maui didn’t have a fashion scene? She would change that.

Her eponymous label works well in the tropics, where effortlessness is the order of the day. Recognizing that visiting celebrities (and the rest of us) want to look stunning straight off the beach or plane, Coulombe created one-size-fits-all dresses that drape around the body as if tailored to each wearer.

“That comes from touching and cutting all those designer brands,” explains Coulombe. “You don’t get that training in school.

Part salesman, part stylist, Chappell has been Coulombe’s assistant from the start. He lends his sophisticated island chic to the jewelry he designs for the shop.

“Arid knows everybody,” says Coulombe. “When we set up style suites at the pre-Oscar and Grammy parties, he tells clients we’re in town for x number of days and they all come.”

“Everybody” includes A-list celebrities such as Halle Berry and Janet Jackson. During the recent Grammy Awards, Coulombe camped out in West Hollywood’s London Hotel, outfitting some of the hottest names in rock.

Coulombe creates in a beachfront studio above her shop at 505 Front Street. Her childlike enthusiasm for feathers and pearls is reflected in her workshop, where piles of ostrich-feather boas wait to be deconstructed and attached as fringe to cropped jackets and plunging necklines. Cutting tables overflow with bolts of luxurious batik prints and silk jerseys.

“I get inspired by seeing women dressed up, looking good,” says Coulombe. “My designs are about girl energy—that spark when they walk into the room.”

Coulombe also maintains a showroom in Vancouver, where she stocks a cool-weather line: kimono-like sweaters, light knits, leather, cashmere, and leggings. “My clients travel everywhere from New York to Dubai,” she says. “These soft, transitional pieces work for them.”

This December, she plans to debut a line of shoes: “wedges that can be worn in the tropics, on grass.”

Next time you’re craving a little Hawaiian couture, slip into one of Maggie Coulombe’s feminine, sexy designs and feel the star power.