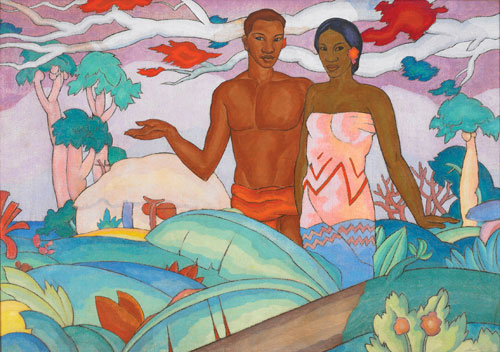 When the Hotel Hana-Maui was sold to Denver-based Amstar Group LLC earlier this year, a collection of paintings that had long been on display at the hotel was removed and offered for sale. The paintings are among the best-known works by Arman Tateos Manookian, a fiery artist once legendary in Hawai‘i. A radical innovator in his use of color, Manookian was a tormented soul touched by genius.

Born in Istanbul in 1904, he was the eldest son of the publisher of one of the city’s more than fifty Armenian newspapers. The fading splendor of Istanbul colored Arman’s childhood imagination. He once told an interviewer that he was from “Byzantium . . . the eastern capital of the Roman Empire.”

On April 24, 1915, that idyllic childhood was shattered when Turkish authorities targeted Arman’s father for arrest, along with several hundred other Armenian leaders and intellectuals. Arshag Manookian fled to France, where he died two years later. Arman, his mother and two siblings stayed behind, living in fear as the Armenian Genocide unfolded in the nearby provinces.

Using money from the sale of the family printing company, sixteen-year-old Manookian arrived at Ellis Island in April of 1920. A scholarship allowed him to enroll at the Rhode Island School of Design, and he later took night classes at the Art Students League in New York. 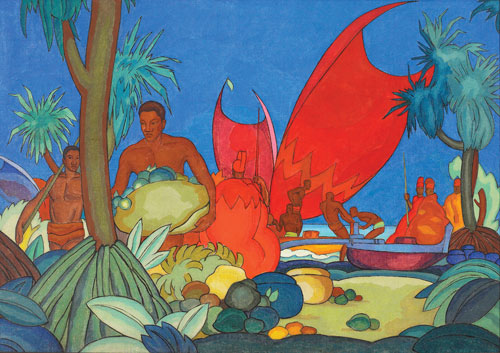 In 1923, Manookian joined the Marine Corps, hoping to see the world. He caught the attention of Major Edwin McClellan, a historian working on a 1,000-page history of the Corps. Manookian provided hundreds of historical sketches for the book—which was never published—and also began illustrating for Leatherneck magazine.

In June of 1925, McClellan was assigned to Pearl Harbor, and Manookian followed him. Soon after, McClellan became editor of Paradise of the Pacific (precursor to Honolulu Magazine), and asked Manookian to provide illustrations. The artist created historical depictions of Hawaiians’ first encounters with the Europeans and Americans who would come to dominate them. His idealized portrayal of the native population may have reflected a commercially popular style, but it’s tempting to speculate, given his past, that Manookian felt a special affinity for another subjugated people.

After his military discharge in late 1927, Manookian joined the art staff of The Honolulu Star-Bulletin and worked there for the next three years. He also joined the newly formed Association of Honolulu Artists, and began to execute his first large oil paintings.

In Hawai‘i, Manookian bloomed as an artist. He loved to sketch the ramshackle homes that could still be found on the local beaches, and painted mythological and historical scenes with fervor, infusing them with drama and energy.

Color became his trademark, reflecting his absorption of Byzantine color as a young man. Manookian’s bold hues were challenging to those who first saw them, including visitors to his one-man show at the Honolulu Academy in May 1928. He told art critic Clifford Gessler that he believed in the “emotional significance” of color and that he aimed to create color harmonies that suggested “repose and satisfaction.”

By 1928, a group of striking Manookian murals was hanging in the Green Mill Grill, a popular restaurant on Bethel Street. It was there, in 1929, that Helene Irwin Fagan and her friend Muriel Damon saw and purchased several Manookian oils.

Arman’s new patrons were two of the most influential women in Honolulu. The heiress to a Hawaiian sugar fortune, Helene had just married her second husband, financier Paul Fagan, and commissioned renowned architect C. W. Dickey to design her new home on Diamond Head. Muriel Damon, herself a painter, would be her next-door neighbor. Helene’s cousin, Alice Bowen Spalding, managed a gallery in the Gump Building in Waikiki (now owned by Louis Vuitton). There, Spalding gave Arman his first and only commercial exhibition in the fall of 1930.

Despite Manookian’s success with collectors, his erratic behavior damaged his reputation. His temper led him into heated discussions about art and culture, and he was often dissatisfied with his own work. At one exhibition, he flew into a rage and tore up several of his paintings.

“The way I heard the story,” says Patrick Robinson, former director of the Hana Coast Gallery, “Manookian would paint until he had assembled a body of work . . . decide all his paintings were garbage, and burn them or tear them up.”

In 1931, Manookian was sharing a home with an architect who dabbled in photography. After shutting himself in his room for several days—some say because he was despondent over a botched affair with the architect’s wife—Manookian drank photo developer, opened the door, and fell dead in front of a group of friends. He was twenty-seven years old.

In France, his mother, brother and sister were shocked at the news. Well-meaning friends in Honolulu sent them Arman’s watch and two paintings, consoling the family by telling them that he had been a “great artist” who had created murals for the Honolulu Opera House. In truth, his last public work had been a four-foot-wide mural painted over the drinking fountain of the Waipahu Theatre.

When Paul and Helene Fagan divorced in 1944, he retained the Manookian paintings. In 1946, Paul opened the Hotel Hana-Maui, and for the next sixty years, the paintings remained there, sometimes displayed, sometimes forgotten and haphazardly stored away as the hotel underwent a series of different ownerships. In the 1990s, the rediscovered paintings were restored and returned to prominence in the hotel’s public areas. They represented a significant portion of Manookian’s oeuvre; fewer than thirty of the artist’s oil paintings are known to exist today, most of them in private hands.

Two of the former Hotel Hana-Maui paintings, now owned by John and Patty Dilks, will be on view at the Honolulu Academy of Arts from November 4 through February 27, part of the exhibit Meaning in Color/Expression in Line: Arman Manookian’s Modernism.

One of them, Hawaiian Girl and Boy, displays an idealized couple whose beauty and solemnity evoke a Byzantine Adam and Eve. Another canvas, Red Sails, is Manookian’s fantasy of an ancient Hawaiian feast, with a background of Hawaiian royalty gathering in feather capes under patterned red sails.

Both are history paintings of a sort, but the artist who painted them was striving for artistic intensity, not historical accuracy. His goal had been to create a “symphony of color,” but he died leaving only tantalizing fragments of his dream.