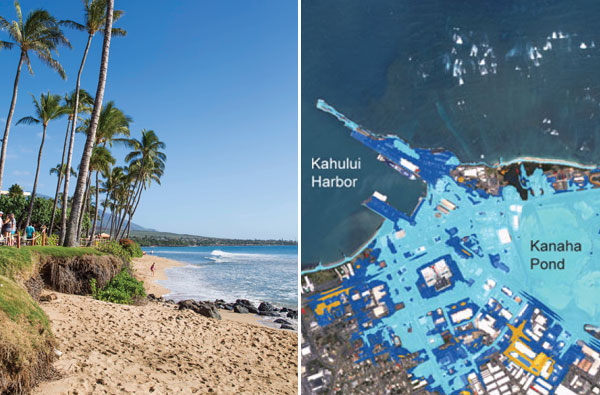 Some days, the pull of wave, sand and setting sun detours my drive home along Maui’s north shore. I look for those narrow public footpaths that lead from the end of a road lined with private homes, and follow them to the ocean’s edge. Brilliant pink borders the tufts of clouds ringing the West Maui Mountains as fractured pieces of fading sunlight wash in and out on the swell. A row of houses flanks the crest behind me, but the windows are dark. For now, this place, these sounds, smells and sights belong to me alone.

Who wouldn’t want to own a piece of Maui coastal paradise? Walk a few steps to join the dawn patrol of surfers at a north break; greet the day from a Hana parcel with 108 sun salutations. Pocketbook willing, Maui has options to capture dreams like these. In fact, like the first Hawaiians, the majority of us live coastally, even if we don’t all have beachside seats. Recent studies, however, reveal that many of our coveted beaches are slowly but steadily disappearing. Other less visible changes are afoot elsewhere on our island.

Surveys by the University of Hawai‘i have established that a whopping 78 percent of Maui’s beaches are eroding. Coastal geologists peg sea-level rise as the primary culprit. Current erosion rates on Maui average about five inches per year. It’s a bit slower on O‘ahu — little comfort for the half-dozen north-shore homeowners there whose properties are about to collapse into the ocean. On the plus side, the rise isn’t accelerating in the Islands, but UH professor and geologist Chip Fletcher cautions against complacency.

“Hawai‘i happens to be in a sweet spot right now in the central Pacific,” he says, comparing it to places like Micronesia, where the sea-level rise is four times higher. A decade or more of enhanced trade winds has blown water towards the western tropical Pacific. “At some point,” Fletcher says, “those winds may stop, and if they do, the water will come sloshing back.”

What aspects of our changing climate should current and prospective coastal dwellers consider? What actions can help slow or mitigate the impacts? Fletcher puts it simply: “The beach needs room.”

Development too close to the water not only threatens oceanfront structures, it can also interrupt natural dynamic processes that keep our beaches healthy. Shoreline setback rules for Maui are based on a scientifically determined annual erosion rate multiplied by fifty, plus a buffer of twenty-five feet. A site whose erosion rate is six inches per year would require buildings to be set at least fifty feet from the shoreline (6” x 50 = 25’ + 25’ buffer = 50’). A beach with no evident erosion means the setback could be as little as twenty-five feet. But that doesn’t mean it’s wise to build as close to the beach as possible.

Michele McLean, deputy director for the Maui County Planning Department, advocates building as conservatively as possible. “We encourage people to go above and beyond if it would be prudent,” she says. “If you’ve seen the historical changes, it’s a no-brainer.” She also warns that existing structures may become nonconforming as the beach erodes. (For example, a structure damaged by a storm surge might have been legal when built, but current setback standards could preclude future repairs or additions.) McLean advises prospective buyers to do their homework, including contacting the department for site-specific information.

And don’t count on building a seawall to stop beach erosion. While such structures are stillbegrudgingly allowed in some places, McLean doesn’t expect that solution to continue indefinitely. In the lingo of coastal hazards, seawalls are “hard defenses” that fix the shoreline at that specific location, but likely shift beach loss to elsewhere on the coast.

An alternate solution is a soft defense that can adapt to and supplement natural beach processes. Coastal-hazards specialist Tara Owens from the University of Hawai‘i Sea Grant College is a strong proponent of one such defense: coastal dune restoration, which can supply sediment to the beach during erosion periods, store it when not needed. She describes a beachfront condominium with unauthorized sandbags in front of the building. “The owners thought it was providing protection. In reality, the dune area was so degraded, it was zero protection.” The sandbags provided a fixed defense, but deflected waves could scour sand from under the bags and transfer it down the beach. With a lot of skepticism, the landowners agreed to work on a restoration project. The native vegetation they planted helped trap and stabilize sand on the dune. The result: sand added back to the beach. Owens says they were thrilled with the outcome, a beautifully restored coastal dune that provides a lot more protection.

Some climate-related aspects of best-management practices for oceanfront construction are indistinguishable from general coastal-hazard considerations, such as locating the first floor above expected flood elevations, or not using a slab-on-grade foundation. Other impacts of a changing climate extend well beyond the shoreline. The Hawaiian Islands have experienced declining rainfall and stream flows over the last 100 years. A growing consensus among climate experts says the Islands will see wet places getting wetter while dry areas get drier, changes likely to alter not only our coastal experience, but also to create challenges for managing Maui’s water resources. With more intense but less frequent storms predicted, long-term water storage will become more difficult; major erosion events will increase.

Science manager Jeff Burgett at the Pacific Institute for Climate Change Cooperative looks beyond human adaptation strategies. “To a certain extent, people can insulate themselves from the effects. Nature can’t. Climate change is going to affect Maui in pretty deep ways.” Burgett says current research predicts massive coral destruction. “Within the lifetime of people being born now, we’re looking at coral reefs as we know them disappearing from areas around Hawai‘i.” In the upper elevations, most of our forest birds could vanish in the next century. Coastal nesting seabirds face inundation of nest sites. Studies on Haleakala volcano indicate climate change as the main driver of population decline for the iconic silversword.

For Burgett, the loss of places and native species is also a social and cultural issue; as these things disappear, the stories and connections we have to them are also lost. “It’s the kids that are really going to feel it.”

Other climate specialists find optimism in local engagement. Dr. Victoria Keener, research fellow at the East-West Center in Honolulu, says Hawai‘i is very advanced compared to other places she’s worked — where some folks walk out of the room when talk turns to climate change. Keener’s project looks at how future changes might affect our water supply, using different development scenarios that range from a greener future with more restoration, to maximum build out. She’s been extremely pleased with the level of community participation in developing the scenarios to inform future decision making.

Chip Fletcher points to the County decision to purchase coastal land in the Launiupoko area of West Maui as a good example of “managed retreat” from the shoreline. Tara Owens takes heart in local, state and national actions, such as the vibrant South Maui volunteer dune restoration group, a state law mandating consideration of climate adaptation in planning decisions, and the recent appointment of Hawai‘i’s governor to a national task force on climate change.

The causes of and potential solutions for climate change go beyond considerations of how to adapt our coastal lifestyle. But our beaches serve as an important barometer for gauging whether we will take the recommended steps within our control. With climate experts fueling our knowledge and increasing political engagement, Maui appears to have the tools to answer the question: Is this the future we want?