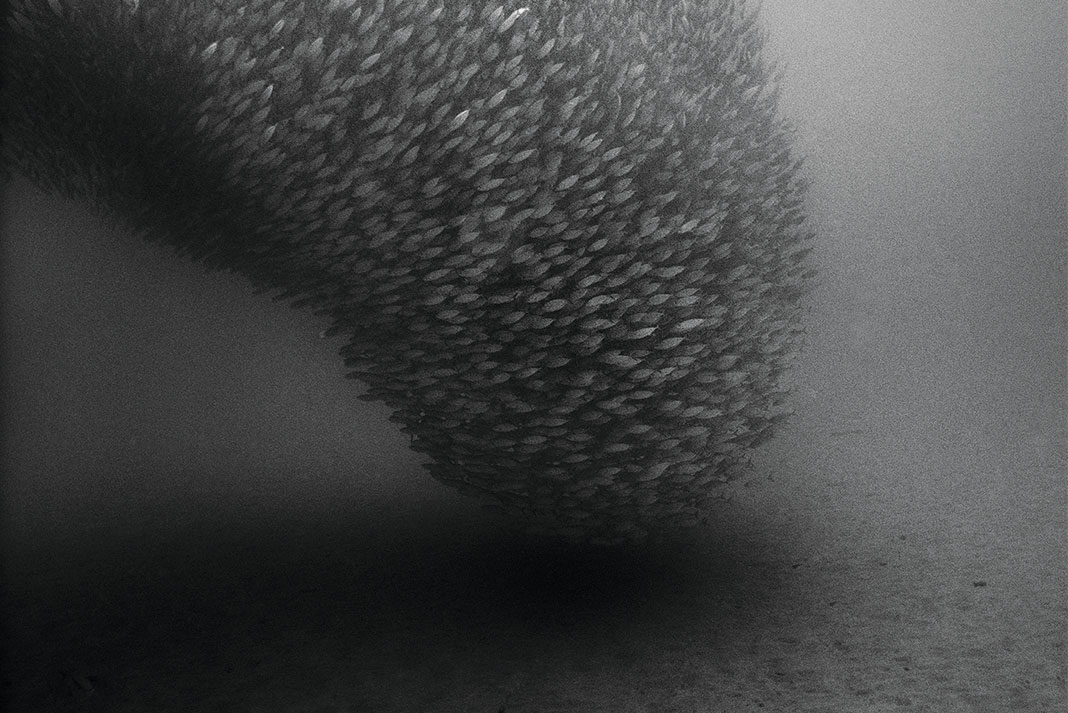 In spring, mature akule (big-eyed scad) congregate in sheltered Hawaiian bays. Thousands of foot-long, goggle-eyed fish form a single teeming mass. Seen from above, the school appears as a shadow beneath the surface, a living calligraphy endlessly writing and rewriting itself.

Akule schools are even more exciting to encounter underwater, as photographer Wayne Levin discovered. For over three decades, he’s dived thirty to seventy feet below to document this phenomenon. The black-and-white photographs in his book Akule reveal a kaleidoscopic world: towering spirals and figure eights ceaselessly evolving in a fluid realm. Drama arrives in the form of pelagic predators. Barracuda, trevally, and amberjacks work the edges of the underwater swarm, occasionally darting in for a kill. The akule scatter and contract around the danger, surging as a single organism and embodying an ever more interesting geometry.

Historically, Hawaiian villages posted kilo i‘a, or lookouts, to watch for these telltale shapes from tall trees or hills. Whenever a big akule school came near shore, the spotter alerted the villagers, who loaded their canoes with hand-woven olona nets or swam out with baskets. Still watching from above, the kilo i‘a signaled to the fishers, guiding them towards their prey. Afterward, the entire community shared the bounty — drying, smoking, or frying the bony, oily fishes and eating them whole. Akamai (clever) fishermen made sure to set some akule aside to use as bait for larger fish.

Today, commercial fishers rely on aircraft and sonar to locate akule, and net the frenzied fish by the ton. But in East Maui, the old ways are alive and well. Akule Hale sits on hill overlooking Hana Bay. In the thatched hut’s shade, kupuna (elders) sit, talk story, and keep an eye out for shadows in the water. When the kilo i‘a sound the alarm, their friends and family race down to the bay.