Enticed by the tropics? Delight in sumptuous meals others prepare? Like to explore new places with family and friends? You could be the target of an ad campaign by the Maui visitor industry. Or you might be a recent and most unwelcome arrival, a distant relative of wasps and bees: the little fire ant.

Ants are native to most places in the world, but not Hawai‘i. Today nearly sixty ant species call our islands home; many are considered “tramps,” critters that excel at using humans to move about, tagging along in our luggage, plants, and cargo. Most of these malihini (newcomers) are a mere nuisance, forming Lilliputian highways along kitchen counters, or engaging in short-lived feeding frenzies around some other uninvited guest. Not so the terror-inducing Wasmannia auropunctata, named for an Austrian entomologist who studied what he called “the most intelligent arthropods — ants.”

This particular specimen is pretty smart: it’s really good at getting other creatures to make its food, and it’s capable of setting up a satellite colony in a space as small as a macadamia nutshell. Its size, only as long as a penny is thick, makes it hard to detect, yet it packs a ridiculously powerful punch. Its painful, burning sting causes skin irritations and itching that last for days, or longer.

Native to Central and South America, the ants live in trees as well as the ground, but don’t hang on very well. A mere brush against a lychee branch or standing in the shade of a mango tree on a blustery day can result in a rain of fire. In some infested places of the world, farmers have a hard time keeping employees. People report being stung in their homes and beds. Pets, wildlife and livestock also suffer — the ants are linked to increased blindness in cats and dogs.

Industrious creatures, little fire ants “farm” colonies of sap-sucking insects such as aphids; with a stroke of their antennae, they induce the bugs to secrete drops of sweet nectar, good for the ant, but bad news for plant health and crop yields. In some forested areas of New Caledonia now dominated by this minute menace, scientists report a near-total absence of other invertebrates. 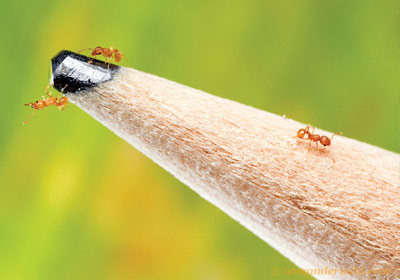 The little fire ant was first seen in Hawai‘i on the Big Island in 1999. Many colonies are now established on the Hilo side. Farmers in the Kona region are struggling to keep the threat contained. University of Hawai‘i researchers are developing control options for homeowners and businesses, but treatments to keep the pests at bay will likely need to be forever. Control in unmanaged wild lands does not seem feasible. Eradication efforts are under way on a twelve-acre site on Kaua‘i; a one-acre infestation on Maui appears to have been extinguished.

State agriculture inspectors’ recent detection of the ants on cut flowers and ti leaves from the Big Island, and the discovery of the ants in hapu‘u tree ferns at stores on Maui and O‘ahu, have raised the alarm that the ants will become unstoppable throughout Hawai‘i. The best hope for halting their spread is the same as the source: humans.

If infestations are found early, it’s possible to extinguish the flame before it becomes an inferno. State officials are urging everyone to become familiar with what the little fire ant looks and feels like, and how to test for it. There are other stinging ants here, including the tropical fire ant, but this one is aptly named — it’s miniscule. For more information or to watch a short film about the problem, visit www.lfa-hawaii.com.

Spot the Ant, Stop the Ant

Testing is easy. Smear a dab of peanut butter on a chopstick. Lay it next to a plant or other suspect area. Wait forty-five minutes. If you see small, orange-brown ants, put the chopstick in a ziplock bag, freeze it and contact 643-PEST (7378) or 573-MISC (6472). Test any new plants you bring home. Ask your nursery if they’re testing for little fire ants. Buy local. Buy Maui grown.