“Pull!” Mere seconds after I shout the command, a small white rabbit bursts from Christmas-berry bushes on my right, crossing open ground thirty feet in front of me. I sight down the center of my Beretta 20-gauge over/under double-barreled shotgun. Cumulus clouds scud across a patch of sky bounded by towering grey-green ironwoods. The only sound is the murmuring of wind through spindly needles.

I shoot. A cloud of pellets explodes in the direction of my target, kicking up puffs of dirt. The white bunny bounces untouched into the bushes. I’m way too slow. I hoist the gun to my right shoulder, focusing more to the left. “Pull!” I command again and a white blur rolls across the dirt. I squeeze the trigger again, but this time I’m shooting just ahead of its dash to safety, and chunks of white clay scatter across the landscape. Grey smoke seeps from the chamber as I break open the barrel, empty the spent cartridges, and point the muzzle towards the ground. I’m ready for the next challenge and my golf cart awaits.

I’m in an open-sided wooden blind at station #5 of the Lana‘i Pine Sporting Clays. The A-framed structure is aptly named “Hare & Partridge.” It’s one of fourteen shooting stations tucked into a 200-acre facility a short courtesy ride from the Four Seasons’ Lodge at Ko‘ele. Situated in the northwest hills of central Lana‘i, the course offers exceptional opportunities to test your marksmanship against disks of clay released to simulate the flight paths of doves, ducks, pheasants, chukars and other game birds, with a hare or two thrown in for good measure.

Not that I had much shooting experience to test. I had been happy to limit my bird-hunting tools to a pair of binoculars. Then I decided to take a gun-safety class and found myself squinting down shiny barrels of firepower aimed at distant targets. Much to my surprise, I wasn’t a bad shot and it was super fun. The opportunity to try my apparent skills against moving targets at what may be the best course in the Islands was irresistible.

My newfound interest has company. Sporting clays have gained popularity in the U.S. ever since being introduced here in the 1980s. The sport originated in England, where an invite to a hunting party required not only the right connections, but also a high degree of proficiency. The less “landed” gentry who wanted to hone their skills needed a way to practice without live birds or vast acreages. Early training grounds used glass-ball catapults stuffed with feathers, and a launch system triggered by an assistant pulling a string on command.

The technology has evolved since glass shards rained on hapless caddies. At the Lana‘i facility, automated launchers are well camouflaged in nearby bushes. Buttons on a remote controller set the quarry in flight. But the call of “Pull” still signals the readiness of the shooter for a target.

While you don’t need to be an expert to enjoy the game, Lana‘i Pine Sporting Clays offers (actually, requires) an introductory forty-five-minute lesson for all shooters new to the course. All sessions start at the pro shop, where a certified instructor explains basic safety rules and shooting etiquette. That’s where I am outfitted with a sportsman’s vest, safety glasses, and ear protection, and offered a selection of shotguns. 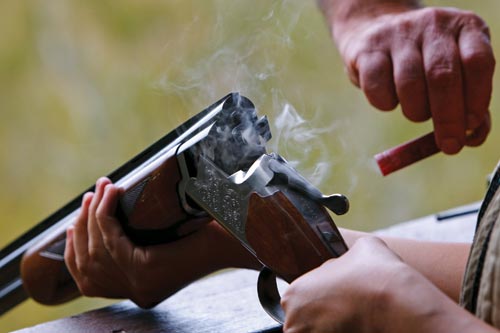 Each shooting station is named for the movement pattern mimicked by the target. The first one is labeled “Hawaiian duck.” I ignore the fact that the koloa is an endangered subspecies and raise my gun. The clay arcs over the trees in a slow descent directly in front of me and I nail it. My shooting partner’s aim is equally impressive and after the next several stations and a few pointers, the guide determines that we are worthy shooters, capable of escorting ourselves around the course.

The other stations are equally fun, but more difficult. One clay whizzes left to right along the tree tops, while the next flushes low and fast, barely cresting the lowest shrubs. An incoming target shows only its narrow side profile. You must shoot up, down, close in and far range, before the clay disappears into a wooded slope or scoots unperturbed along the ground. You are allowed a test launch before firing, but it’s still tricky and this course could keep me challenged for a long time.

I ease into the Zen of the game,  remembering to “lead” the target

As I ease into the Zen of the game, I focus on trying to develop a fluid motion, remembering to “lead” the target—shooting so the clay moves into the space I have sprayed with pellets. I work on my follow-through—keeping the finger on the trigger and tracking the target after firing. On several occasions I manage to break the clay I missed on a quick-fired second shot. Like all sports, it’s a game of concentration, just one constantly punctuated by pounding blasts erupting inches from your ear.

The stations are connected via a meandering path and driving the golf cart along the narrow paved road is a kick in itself—a bit reminiscent of Mr. Toad’s Wild Ride. There is no time limit and you are free to give any or all of them another go. If you become obsessed with stalking the wild turkey, you can fire away until you’ve mastered that bird or run out of cartridges. But my favorite would have to be the last station. It’s hard to imagine a more idyllic location than this: perched above Lana‘i’s pine-dotted red-dirt hills, the island of Moloka‘i breaching the ocean in the distance.

You may be sharing the course with others. That wasn’t so the day I was there. Lana‘i is known as the “private island” presumably because the majority of it is privately held. But the moniker applies equally well to the sporting clays experience. I felt like part of the gentry, with my own private shooting reserve. Who knows, with enough time on the course, I might even snag an invite to an English hunting party.

$90 Includes Introductory lesson and all gear (gun, twenty-five cartridges, vest, eye and ear protection), golf cart, and transportation to/from the facility and the Lodge at Ko‘ele. Additional cartridges available at the pro shop.

Closed-toed shoes, hat, warmer clothes if the weather is cool or windy.

The complex includes an archery range and air-rifle gallery, with kid-friendly options.