“In just 100 years,” says Maly, “the ‘normal’ [our youth] grow up with is not the ‘normal’ our island kūpuna [elders] grew up with.” That’s an issue he’s working to change, and one way to do that is rebuilding the fishpond — one silt-covered rock at a time.

At nine acres, Waia‘ōpae is the largest of five fishponds native Hawaiians built on Lāna‘i’s eastern shore prior to Western contact. Together, the ponds once helped feed an island population as high as 6,000 people, and fish were even traded in Lahaina, ten miles across the ‘Au‘au Channel.

Throughout Hawai‘i, fishponds like Waia‘ōpae were vital components of ahupua‘a, or traditional land divisions. Combined with resources found on land such as kalo (taro) ‘ulu (breadfruit) and ‘uala (sweet potato), the fish and shrimp from inside the pond help foster both a healthy ecosystem and healthy residents. Although manmade, they’re considered a natural extension of the land, and as native Hawaiian historian Samuel Kamakau penned in 1869, “O nā loko-i‘a, ‘oia kekāhi mau mea ho‘ohiluhilu o ka ‘āina — fishponds are among the things that beautify the land.”

Had you visited this beach five years ago and gazed where the loko i‘a once stood, the kuapā, or fishpond wall, would be gone, only its submerged foundation and a few rock piles remaining.

Fortunately, the foundation was intact, and the rocks were there — though the manpower wasn’t. In 2015, Maly started seeking funds to create workday opportunities for volunteers to help gather the rocks and, over time, rebuild the wall. Maly cites, in particular, grants from Pūlama Lāna‘i, the Hawai‘i Community Foundation, the Lāna‘i Culture and Heritage Center, and the National Oceanic and Atmospheric Administration’s B-WET Hawai‘i Program (B-WET stands for Bay Watershed Education and Training, which provides experiential environmental education for youth K–12).

When I joined Maly for one of the workdays and placed my first stone on the wall, the sense of accomplishment was so addicting that I didn’t want to stop, even once the tide started rolling in. There’s an instant pride in helping to turn back the sands of time, and as he stands on the shore, surveying the gradual progress, Maly says, “Instead of feeling apart from this, we can feel that we are a part of it.”

For information on joining a workday at Waia‘ōpae fishpond or other natural and historical sites on Lāna‘i, call 808-565-3301, or visit LaHanaLanai.com. 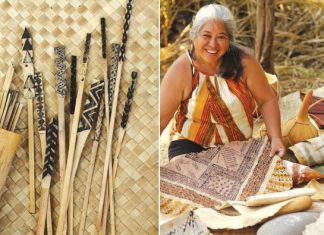 Beauty in the Bark

Among Polynesians, the Hawaiians of old excelled in the making of kapa. Their distant daughters have begun to reclaim this once-lost ancient art.