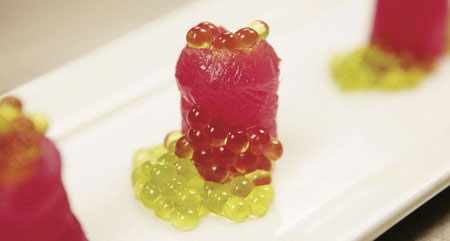 Lobster foams . . . fruit caviars . . . popping candies—these are the delights inspired by the food-science movement, now in its second decade. In the early nineties, food-loving French chemist Hervé This began testing the science behind what he called the “old wives’ tales” populating many cookbooks. This and his colleagues broke recipes down to their essential components. Precisely why do soufflés rise, or fail to? Can the chemical reactions be manipulated? Coining the term “molecular gastronomy,” they pushed the frontier of culinary arts and turned traditional dishes inside out.

What the chemists learned in the laboratory, top chefs put into practice in the kitchen. Champions of molecular gastronomy include El Bulli in Spain and the Fat Duck in England—both restaurants that have captured the title of “Best in the World.” While the United States has been slow to adopt molecular gastronomy’s high-falutin’ fare, island gourmets don’t need to hop on a jet to find it. They can try this cutting-edge cuisine right here on Maui, at the Ritz-Carlton Kapalua’s Banyan Tree restaurant.

While the Ritz was under renovation last year, former chef de cuisine Jojo Vasquez toured Spain and France. He returned with delicious ideas and sophisticated equipment. Vasquez has since moved on from the resort—stay tuned for updates on his exciting new project. But before the chef turned his toque over to his capable crew, he welcomed me behind the scenes to witness the Willy Wonka-esque fun.

My backstage tour begins with gazpacho—sort of. Instead of the regular chilled soup, I’m served two frozen marbles, one red, one green, topped with matching foam. It’s a snazzy palate cleanser offered to Banyan Tree guests between courses. I try the green, cucumber-based marble first, then the red, which is tomato-based. I expect the bubbly concoctions to be frozen solid, but they’re soft. Dissolving in my mouth instantly, each leaves a brief note to echo against the walls of my mouth like the peal of a clear bell. Neat.

“I want the wow factor,” says Vasquez. “You’ve really got to catch all of the senses for that.”

The chef’s buoyant energy is anchored by a sophisticated aesthetic, a competitive drive and a meticulous attention to detail. He discovered that if he froze the gazpacho foam and served it on a chilled spoon, it maintained its shape for seventeen minutes—long enough for a server to deliver it to the table. “I time everything,” he says. “I’m a real geek.”

Geekiness is a plus in this arena. Cooking inspired by molecular gastronomy often employs unexpected, even bizarre, presentations to awaken the senses: savory foods are frozen, dehydrated, or transformed into mousses, gels, or foams.

“Sounds complicated,” the uninitiated might protest. “What’s so great about it?” For starters, the novel presentations allow diners to experience each bite with an entirely fresh appetite—unclouded by memory or expectation of what it “should” taste like. And, according to Hervé This, the more artistic a dish is, the more it says “I love you.”

“The science of cooking really takes you to higher levels,” says Vasquez, whose enormous personal library includes volumes by This and Ferran Adriá, the celebrated chef of El Bulli. Achieving those heights requires doing your homework first. “I definitely don’t suggest working with any of these techniques or playing with this stuff if you don’t know what the food is in the very beginning,” Vasquez says. “There are steps that you need to take before diving into this.”

The steps involved in spherification—the creation of caviarlike spheres from liquids—certainly might intimidate a novice. The process requires several additives, such as sodium alginate, not usually found in a chef’s spice rack.

Vasquez measures sodium alginate, a white powder, on a scale. “Secret ninja dust,” he jokes. He pours it into a brilliant green simple syrup made of sugar water and shiso, an aromatic Japanese herb. The solution is then loaded into a square contraption with numerous holes. The dispenser acts as the chef’s personal rain cloud, releasing a shower of green droplets into a bowl of calcium chloride. The sodium alginate congeals the droplets, while calcium chloride causes a skin to form around each one.

The resulting “caviar” is rinsed and sprinkled over rolled slices of red ‘ahi. It’s an elegant, neatly balanced appetizer—the equivalent of a trapeze act. It looks effortless and clean on the plate, but requires considerable preparation. It tastes great. Shiso leaf’s strong, herbaceous flavor can sometimes overwhelm raw fish, but these tiny bursts deliver flavor in a way that’s both more controlled and more fun. I’m beginning to feel the love.

From shiso spheres we move on to asparagus mousse. Pastry chef Khoeler demonstrates how transparent sheets of gelatin are “bloomed,” or rehydrated, and blended into creamed asparagus. Precise and anticipatory, she works around the others with the practiced ease of a surgical nurse handing tools to a surgeon. The depth of her knowledge is reflected in her vocabulary. When something is mixed well it’s “fully incorporated.” When the gelatin is fully incorporated, it lends a flanlike consistency to the asparagus. Served alongside shrimp cocktail, the asparagus mousse is soft and subtle, a nice contrast to the plump, firm shrimp.

The next dish is also soft, but by no means subtle: Moloka‘i sweet potato foam. Nitrous oxide, delivered via a whip-cream canister, transforms the purple spuds into creamy, lilac-colored clouds. This light and airy side dish is a far cry from your typical starch. Topped with sweet Maui onion relish, it’s a play on two islands.

The entrée that follows is a masterpiece: local lobster atop an orange-carrot risotto cake with tarragon butter.

“We utilize everything from the lobster: the shell, the meat, the roe,” says Vasquez. I watch as he whips lobster broth into brilliant, coral-colored foam. “Everything we don’t use on the plate we turn into a very robust stock,” he says. “I add soy lecithin to the broth, to make it hold together. Lecithin will adhere to any type of liquid and bind its bubbles. A quick buzz with a stick blender produces an amazing foam that spills over the lobster. We’re going for color also; it’s very eye-catching.”

Sous chef Srebrow arranges a lobster claw on the risotto cake, spoons a dollop of foam on top, and hands the finished dish over to me. Everything about it evokes the freshness of the sea: the foam appears to be tumbling down a breaking wave, a few steamed Swiss chard leaves conjure green seaweeds, and toasted roe around the edge of the plate adds a sprinkling of sun-baked color. It tastes equally amazing; tarragon butter amplifies the fresh, rich flavor of the lobster and the crisp risotto cake provides a seductive textural counterpoint. This superb dish is an admission of true love; don’t miss it on your next trip to the Banyan Tree.

Working at a large, prestigious resort affords the chefs the leisure to experiment. They’re expected to come up with dishes that wow their discerning clientele. “I can get a good hour, two hours of time to play around each day,” says Khoeler. “It’s like being a kid again.” She hands me a skewer of pineapple, sage, and dark chocolate. The chocolate is imbedded with pastry rocks, the gourmet version of Pop Rocks candy.

“Let the chocolate melt in your mouth, so the pastry rocks explode,” she says. “It’s really cool.” As I savor the silky chocolate, a private meteor shower erupts in the back of my mouth.

Wow. Who knew science could be so delicious?