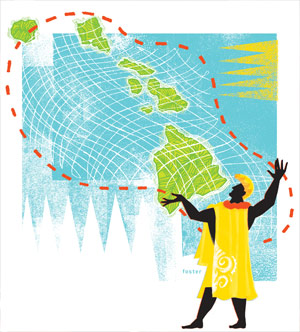 Kamehameha the Great united the Hawaiian Islands, but he never conquered Kauai. That island’s last monarch now lies in Lahaina’s Waiola Cemetery, shrouded in a legend that is the stuff of grand opera.

In the standard version, Kaumualii is a tragic figure: kidnapped by Kamehameha’s son Liholiho, forced into marriage with the powerful queen Kaahumanu, and exiled forever from his island home. Peter Mills, Ph.D., a professor of anthropology with the University of Hawaii at Hilo, believes the truth is more complicated. While Kaumualii may have been compelled to marry Kaahumanu, evidence exists that their marriage became a partnership—and made Kaumualii one of the most powerful men in the kingdom.

He was already one of the most shrewd. In 1810, after two failed attempts by Kamehameha to invade Kauai, Kaumualii negotiated a peace agreement that allowed him to retain control of the island. “Kaumualii did symbolically cede Kauai in 1810, but not in any practical sense,” says Mills. On numerous occasions, Kaumualii refused to pay his obligatory tribute, and “openly reneged on the cession by 1814. I think Kamehameha I and Liholiho both tolerated Kaumualii’s practical independence until 1821.”

That year, Liholiho sailed to Kauai and spent two months as Kaumualii’s guest. One evening, during what was supposed to be a friendly dinner aboard Liholiho’s yacht, the vessel abruptly set sail for Oahu—with Kaumualii as prisoner.

“One reason for the timing of the abduction,” says Mills, “was that in July of 1821, Kaumualii was planning to send one of his royal vessels to Tahiti’s king Pomare II, on behalf of some missionaries. The Kamehamehas didn’t want Kaumualii to be the alii [chief] to arrange such an important trip.”

Liholiho had his own reasons for undertaking so bold a move. Kamehameha I had died in 1819, leaving Liholiho, then in his early twenties, to reign as Kamehameha II. But in court, the young king was overshadowed by his mother, Keopuolani, and his stepmother, Kaahumanu, favorite wife of Kamehameha I. Liholiho may have hatched the plan to kidnap Kaumualii to assert his own authority and enhance his own prestige.

In the long run, it was Kaahumanu who benefited. The Reverend Dennis Kamakahi, a descendant of Kaumualii, notes that “Keopuolani and Kaumualii were half-cousins, both descended from the royal Maui line.” Their lineage was higher than Kaahumanu’s. Already possessed of the powerful office of kuhina nui, or chief advisor to the king, Kaahumanu would have assimilated Kaumualii’s prestige by becoming his wife. In doing so, she also accomplished what neither Kamehameha I nor Liholiho had done, says Mills. “Kaumualii’s marriage to Kaahumanu . . . brought him entirely into the fold of the Kamehameha chiefs.”

Kamakahi believes the marriage was more than a political maneuver. “Although Kaumualii yearned to be back in Kaua‘i, I think his bond with Ka‘ahumanu was strong.”

Missionaries Daniel Tyerman and George Bennet, contemporaries of Kaumualii, wrote that “he and [Kaahumanu] live here in great plenty and comfort, surrounded by numerous dependents, and displaying as much of barbarous pomp as the king himself.”

In 1924, Native Hawaiian historian Stephen Desha wrote, “Kaumualii became the one who enjoyed the riches of Kamehameha’s court. . . . He was the beloved husband of Kaahumanu, who had married him in the presence of the great alii of Oahu.”

Kaumualii died in 1824, a year after the death of his half-cousin and dear friend Keopuolani. They are buried in Waiola Cemetery on Maui, along with other members of the royal family.

Peter Mills believes the view of Kaumualii as victim ignores the role he played in the formation of the Hawaiian nation. “His magnanimity and humility with Kamehameha I and Liholiho, and eventually in his bittersweet marriage to Ka‘ahumanu; and his friendship with Keopuolani, all helped create and unify the Hawaiian Kingdom through diplomacy instead of bloodshed.”