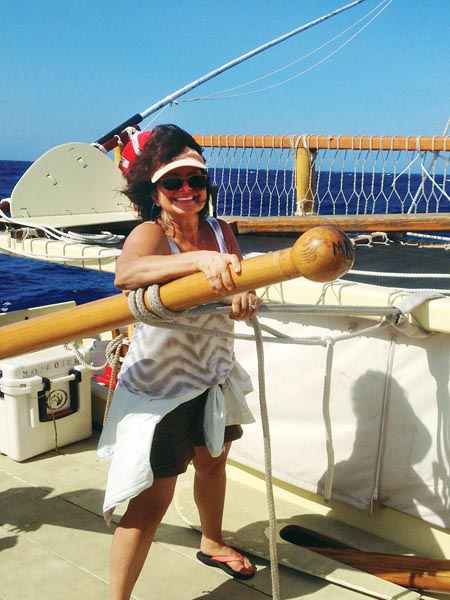 “Duck!” someone warns, and I drop to the deck as the boom swings overhead. The huge sails flap as the crew guides them in, then fill with wind, tall and proud. The canoe surges forward, flying on the crest of the next wave. I scramble to the stern, out of the way of the busy crew. There, steersman and teacher Makanani, a Hawaiian man with laughing eyes and a sturdy build, steadies the massive wooden steering blade, confidently slicing the path ahead.

I’m one of several guests on the Mo‘okiha o Pi‘ilani, a sixty-two-foot wa‘a kaulua, the first Polynesian double-hulled voyaging canoe built and launched from Maui in 600 years. No small accomplishment for Hui O Wa‘a Kaulua, the nonprofit organization whose dedicated men and women have stewarded the project, and no small honor for us to be aboard.

Over the course of nearly twenty years, hundreds of people helped build Mo‘okiha, some by raising funds and public awareness, some working under the expert guidance of Snake Ah Hee and later Captain Timi Gilliom. Through the leadership of Kimokeo Kapahulehua, Mo‘okiha o Pi‘ilani finally launched (Hawaiians would say she was born) July 11, 2014. On that day she took her place as a cultural treasure, joining the grand canoes of each of the Hawaiian Islands.

“Would you like to take the blade?” Capt. Gilliom asks me. He motions to Makanani, and a moment later, I steady my feet, and take hold. To keep the massive blade from catapulting me overboard, Makanani loops a rope around it, and ties the other end to the side of the canoe opposite the greater pull. Still, it is a challenge. My face is covered with sea spray and a smile as wide as the ocean. For an instant, I am transported — imagining what it was like for the early Polynesians who crossed the Pacific from Southeast Asia, the Marquesas, and Tahiti, bringing only what they could store on a canoe much like this, navigating by the stars, winds and currents alone.

It took Westerners far longer to get here. After they did, they began to establish laws that forbade the practice of Hawaiian language and customs, nearly wiping indigenous knowledge from memory. Even fifty years ago, many still considered Hawai‘i’s indigenous culture primitive. Yet the Hawaiians’ astute understanding of the natural world not only enabled them to settle here at a time when European vessels were still hugging their continental coastlines in fear of falling off the Earth; it allowed them for more than a millennium to live sustainably on the most remote islands on the planet.

In the early 1970s, a group of intrepid Hawaiians set out to recover their culture — by building a floating classroom, a replica of the ancient sailing vessels that brought Polynesians to Hawai‘i. Against all odds, the Hokule‘a was born. In 1976, her successful voyage to Tahiti without the use of modern navigational instruments shocked the world, and began a cultural revolution.

The wind abates, and Makanani rescues me from my duty as steerswoman. I watch with respect and awe as the crew begins to bring the sails in. Makanani speaks softly and with aloha, expressing his gratitude that future generations of all backgrounds will be able to learn hands-on aboard the Mo‘okiha, balancing the wisdom of Hawaiian kupuna (elders) with modern technology, meteorology and navigation.

“The canoe is our family,” Kimokeo once told me. “We are nothing without the guidance of our kupuna, our ancestors. Connection with our past guides us to the future.”

Wishing you all the joys of the season, and the gift of connecting to one another.

This Christmas, Hui o Wa‘a Kaulua continues fundraising to secure a permanent home at Lahaina Harbor. For information visit HuiOWaa.org. To learn more about Mo‘okiha’s journey, read the stories “Raising Mo‘okiha,” “Now, Voyager,” and “Birth of a Canoe,” in our online archives.