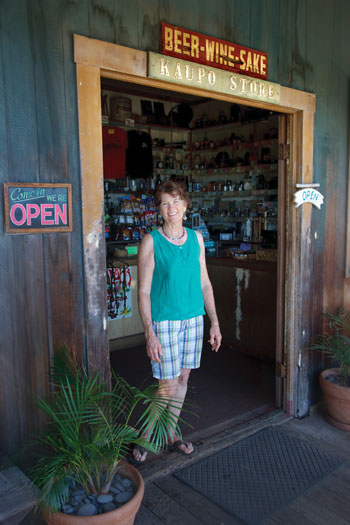 It’s not till ten a.m. or later that Linda Domen opens the store. No hurry. At this hour there’s almost no one passing on the road, the only road, a road made entirely of pothole patches, a road that makes car wheels tremble and chatter at fifteen miles per hour. The store, with its high, ample lanai, looks across that road past a desiccated pasture out to the open ocean, which is bright cobalt in color and wind-whipped into white flecks. Water occupies the entire horizon, giving glimpses of Hawai‘i Island’s mountain peaks on the far left and the stern, broken coastline of leeward Haleakala running off to the right. The sea is inaudible here. All one hears is the wind, the constant curator of this dry land’s natural silence.

These days, Kaupo feels like ghost country, a place surrendered to the forces of wind and stone. One of the great districts of East Maui, Kaupo once knew thriving coastal villages, heiau (temples) of major importance, forests that grew almost to the sea, and regular canoe traffic that passed between Hawai‘i Island and Lahaina. During the eighteenth century the troops of Big Island chief Kalaniopu‘u swept in here to maraud and conquer. A young warrior named Kamehameha was among them. They cracked a lot of skulls until Kahekili, that peerless Maui chief, came overland from Wailuku and drove out the raiders.

If someone wanted to conquer Kaupo today, he’d have a tough time finding people to harass—a few dozen at most.

Even into the early twentieth century, the days when steamships would stop at Kaupo Landing and the residents would all turn out for hukilau, or big fish-hauls, this was a substantial community. Kaupo School (now closed) had dozens of students. It seems that when the belt road opened to automobile traffic in 1937, residents began using it as an escape route.

Linda Domen unlocks the old front door and swings open a pair of big wooden shutters, hooking them in place with cleverly devised old wire snags. A one-story wooden cabin with corrugated roof, the store is still as tight as a tub, just exactly as it was in 1925 when Nick Soon built it from salt-soaked lumber—boards that were floated through the sea to Kaupo Landing more than eighty-five years ago. Although time and the incessant wind have weathered away much of the store’s old dark-green paint, the original boards gleam like polished leather. Nick’s old sign is still fixed over the front door: a red board with white capital letters, BEER – WINE – SAKÉ, and beneath that, in antique punched-out metal letters, the screw heads rusted now: KAUPO STORE.

“My life is an open book,” says Linda as she swings open the office door, more windows, the back door. “People ask me the same questions every day. ‘How long have you been here?’ they want to know. I don’t know why. But I tell them. Over thirty years.”

She’s a California girl who, like many of her late-sixties generation, traded her menial-job income for a Hawaiian Airlines plane ticket and a new, self-defined life. She met her husband, Manny, a Kaua‘i native, in Waikiki, and together they moved increasingly rural—to Kula, Maui, in the early seventies, where the first three of their five children were born, and then to a piece of leased land in the wilds of Kaupo. “We wanted to live ‘off the grid,’ but in those days it didn’t mean solar panels; it meant kerosene lamps.” Today, with the kids pretty much grown and gone, she remains slender and strong, her eyes sparkling and affectionate, and her features bear the natural effects of a lifetime in rugged Kaupo.

She remembers meeting Nick Soon in 1970 after hiking down Kaupo Gap from Haleakala Crater. (The gap trail delivers hikers right to Kaupo Store.) But by the time she and Manny found their homesite, Nick had died and the future of his hand-built store was uncertain. His own family had left the region. Nick’s son Alfred, for example, was a Purdue graduate working as a professional engineer. What to do with Dad’s store? For the Soon descendants, the young family building a home down the road must have seemed a godsend. While Manny found employment in outlying parts of East Maui, Linda took over the store. As she puts it: “You could say I fell into the job.”

That job, these days, is to run a snack shop. “This is not about the local people,” says Linda. “This is about the quick fix.” Her customers (mostly) are coming in their rented cars around the mountain, having experienced the famed “Hana Road” and the falls at ‘Ohe‘o Gulch and now hoping to make a dash back to their hotels rooms around the backside of the mountain. Linda’s store, with its ice cream and drinks and candies, provides daily (except Sunday) therapy for the geographically panicked. (She closes at five.) (Cash only transactions.)

Mr. Soon personified the ingenuity and industry of Chinese immigrants to pre-statehood Hawai‘i. He was a photographer by trade; his arsenal of photographic gear is now arrayed on shelves behind the store’s cashbox, and albums of his archival black-and-whites depicting old-days Kaupo are close at hand. One shows the Model T truck that Nick built himself, the parts shipped piece-by-piece to Kaupo Landing. After he assembled the pieces, he taught himself how to drive—well before Kaupo had a road to drive on. He repaired radios and televisions, rewound the wiring on generators, and converted appliances so they could be powered by windmills. On Linda’s shelves, near antique bottles and original (steel) Primo beer cans and a copy of Popular Mechanics Shop Notes 1924, one can find a radio that Nick made out of a cookie sheet, a clock made from the dashboard of a jalopy, and a cardboard Eveready battery box that he converted into a traveling caddy for exotic birds that he raised himself.

In his day the store sold feed, hardware, auto supplies . . . whatever you’d need. Besides his photography studio out back, he had an Edison-quality workshop in which he would melt lead, turn gun butts on a lathe, and fashion bamboo fishing poles. (He was an ulua fisherman.) He was the postmaster for Kaupo, and Linda still has his postal stamp, the letter-drop slot, and the machine for making money orders. Nick and his brothers, they say, built and operated a chain of stores around East Maui in places that are now quite desolate—Nu‘u, Hamoa, Nahiku. . . .

“It wasn’t that long ago,” says Linda. The belt road around East Maui was finished just eleven years before she was born. “From here you can almost reach out and touch the past.”

And she is acutely aware that Kaupo Store’s survival today is as tenuous as ever. Four years ago a freak earthquake tumbled stones onto the roadway near here, so the County simply shut down the belt road, driving the Domens out of Kaupo and forcing the youngest child to withdraw from faraway Hana High School. Basic road repairs took a full two years to accomplish, during which time the family was displaced and the store went into a coma.

Says Linda, “I trust God and know that he provides. It’s not in my control. I’ve learned that over and over. Just surrender and have faith. That is the only way we have survived. And we’ve made it so far.”