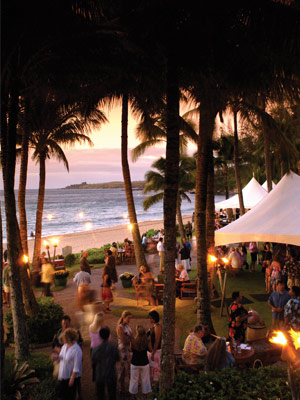 “How much?” I was in shock. Bottle shock, one might say. I had just learned how winemaker Heidi Barrett made history in 2000, when a six-liter bottle of her ’92 Screaming Eagle wine sold at the Napa Valley wine auction for half a million dollars. Now, that’s a woman I would like to meet—and happily, you and I will both have that opportunity when the Kapalua Wine & Food Festival returns to the Ritz-Carlton, Kapalua, June 8 through 10.

The festival itself is good news. After dramatic cutbacks at Maui Land & Pineapple Company, the Kapalua Wine & Food Festival found itself without a major sponsor at the close of the 2011 event. “We just couldn’t let that happen,” says Ritz-Carlton General Manager Tom Donovan. Over the past thirty years, the festival has earned a reputation for being one of the best—anywhere—featuring world-renowned winemakers, celebrated chefs, and fabulous interactive tastings topped off by gala evening events. Known internationally as Hawaii’s preeminent wine event of the year, it has become one of the jewels in Kapalua’s illustrious crown. “All the resorts and restaurants stepped up; it’s a Kapalua-supported festival now.” And with Donovan at the helm, and both the Ritz-Carlton and Visa on board as major sponsors, the Kapalua Wine & Food Festival isn’t leaving home.

“What’s most important to us,” says Donovan, “is to continue our tradition of bringing folks knowledge and insight that they didn’t have before—and to attract the winemakers and wineries that showcase those incredible, handmade wines we would never have the opportunity to taste outside of the festival.”

The Grand Tasting on Friday will feature more than 1,000 wines, along with culinary offerings from Kapalua’s award-winning restaurants, including Pineapple Grill, the Banyan Tree, Sansei Seafood Restaurant & Sushi Bar, and Merriman’s. Sunday, the popular Seafood Festival—yes, a festival within a festival—will bring together epicurean delights from top restaurants around the island, and wines from around the world. Maui No Ka ‘Oi will be there too, as judges for the Best of the Fest seafood dish.

Of course, for true wine aficionados, the real excitement is the seminars. I will never forget attending Cult Cabs. Entering the room was an olfactory overload, as the aroma of 600 standing glasses of deep ruby-colored wine enveloped my senses. “It’s not just tasting,” says Donovan. “Part of thrill is to hear winemakers talk about the process, and hear the passion they put into their art. That’s why we are so thrilled to have winemakers like Heidi Barrett.”

Barrett reached cult status as a winemaker back in 1992, when she garnered a perfect 100 points from wine critic Robert Parker Jr. for her Dalle Valle Vineyard’s proprietary red, Maya. She repeated the feat the following year—and acquired further fame with wines she produced for Screaming Eagle, whose ’92 and ’97 vintages both received 100 points. Then came that history-making $500,000 sale of her ’92 Screaming Eagle wine. A vertical offering of her wines sold for $650,000 the following year!

Robert Parker dubbed Barrett the “First Lady of Wine.” If so, that would make her husband, Bo, “First Gentleman.” Bo Barrett is the winemaker for Chateau Montelena, and the son of Jim Barrett, whose vintage Montelena chardonnay won first place at the Judgment of Paris in 1976—the winning wine on which the movie Bottle Shock was based. Husband and wife recently teamed up to create their own label, La Sirena, which Heidi will be presenting this year at the Kapalua Wine & Food Festival. Come prepared for greatness.