The clubhouse at the King Kamehameha Golf Course in Waikapu is one of the few public places on Maui where you can see kapa created by living-legend Pua Van Dorpe. Commissioned for the club’s Hawaiian-themed art collection, these eleven keiki kapa moe (baby blankets) each honor a Maui chief, who would have received a personal pattern at birth, identifying his lineage. Our thanks to King Kamehameha for permission to feature these kapa, and the accompanying text, on our website. 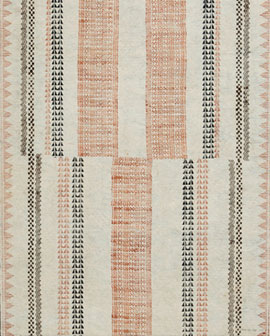 The 12th and 13th centuries A.D. were a period of chiefly migrations to the Hawaiian Islands from central Polynesia. The migratory chiefs included Huanuikalala‘ila‘i and Paumakua-a-Huanuikalala‘ila‘i, grandfather and father, respectively, of Haho, who was presumably Maui-born.

Haho’s grandfather was an independent and warlike ruler of Hana. With his huge warfleet, he plundered the coasts of Moloka‘i and Hawai‘i Island, and was the aggressor in the earliest remembered war between Maui and Hawai‘i.

In Haho’s lifetime, Maui’s various districts were ruled by independent chiefs. Haho deserves recognition as the founder of the ‘Aha Ali‘i, Maui’s first Council of Chiefs, designed to consolidate power as “a protection of the native aristocracy against foreign pretenders.” The council lasted until Maui’s conquest by Kamehameha the Great, some five-and-a-half centuries later.