The Making of Kapa

The Hawaiian process of kapa-making is more complex than that of any other Polynesian culture. Different materials and desired outcomes require different procedures—Pua Van Dorpe has rediscovered fourteen methods for wauke (paper mulberry) alone.

The photos tell some of that story: Pua selecting a wauke sapling that’s ready to harvest; Pua and Sam Ka‘ai returning from ‘Iao Valley with root stock for planting and sticks for immediate use. Employing only the tools her ancestors had, Pua makes an incision down the length of the sapling, using a shark-tooth knife, then loosens the bark with her teeth to gain a fingerhold, strips the bark by hand, and fastens each strip in a coil.

Next, the coiled bark is soaked to soften the fibers. (Depending on the intended results, Pua may instead weigh the bark down with rocks in a fresh-water stream or a salt-water tide pool.) Once the fibers have softened, she scrapes the outer bark clean with a wa‘u, the seashell tool shown at bottom, second from left. Then the clean bark is placed in the sun to dry and bleach, in preparation for the first stage of pounding. Flattened on a pohaku kua (stone anvil), the bark is beaten until the fibers spread out to several times their original size. These sheets are again dried in the sun, then torn into small strips that are soaked in water again and formed into soggy balls of fiber pulp. Pua’s daughter, Kapua, lays the balls of fiber between banana leaves and sets them in the sun, creating an aboveground imu (oven) where the fibers will heat and ferment.

The Hawaiians were the only Polynesians who fermented fiber—which helps explain the superiority of their kapa over other bark cloth. Fermenting breaks the fibers down so that it can be beaten into a felt and expanded seamlessly to any size. A single kapa can take eight or nine months to beat, and it takes practice to achieve a uniform thickness. “When the fiber is wet,” says Kapua, “you can tell the thickness only by touch and sound—you can hear the difference in the tap-tap-tap, tok-tok-tok. When the fiber is dry, you can see the difference.”

Hawaiians also excelled at dyes and inked patterns, achieving a rainbow of colors from the plants and minerals around them. But even an undecorated kapa is beautiful, bearing embossed watermarks like the ones in the bottom right photo.

Sources for this article included the April/May 2000 issue of FiberArts magazine, and the 1991 documentary Legacy of Excellence. Inquiries on kapa commissions are welcome; call Robert Van Dorpe, (808) 328-9386. 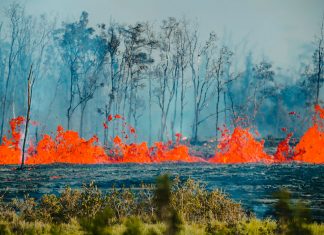 What is it like to live next to a volcano?