“Three weeks later, Hobdy comes to see Pua and says, ‘I found a plantation of wauke in ‘Iao Valley, 800 feet up a cliff.’ Pua went in with Sam Ka‘ai [a master woodcarver and cultural practitioner]. She was gone all day, and came back disheveled. I’ve got a picture of Sam pulling Pua up that cliff, tied to a rope.”

Slips and cuttings from those trees in ‘Iao Valley became the foundation of a four-and-a-half-acre wauke orchard from which Pua obtains her bark. Over the years, many others  have helped in her research. One of the first was Wesley Wong, a state forester from Maui. Among his many efforts on her behalf, Wong organized an expedition to Kaua‘i to find a native lily, the skin of whose berries yields a particular blue dye.

Imoku and Lehua Pali provided the taro patch whose mud, over the course of a week, will stain buried kapa a rich, deep black. Dr. Mark Hagedone, a forensic  scientist, helped analyze the hundreds of materials Pua explored to discover which ones her ancestors had used to achieve their vibrant colors and the mordant to fix those colors and keep them from fading. “Mark approached the project like you would investigate a murder,” Kapua says. “Mom had little jars set up like a chemistry set. She’d fill them with fibers or ashes and give them to Mark to analyze.” 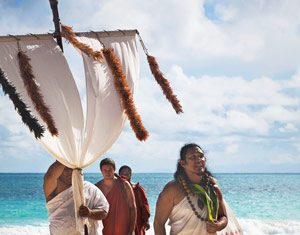 Teya Penniman explores the cultural significance and modern practices of Makahiki season in Hawaii. Learn about this sacred celebration in honor of Lono.