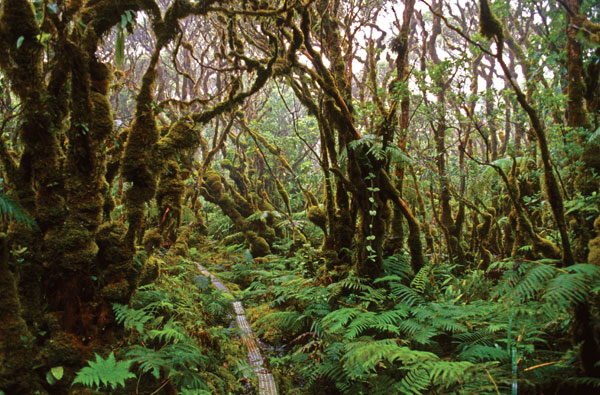 Eight times a year, two SUVs driven by staff members of The Nature Conservancy of Hawai‘i make the rugged ten-mile journey to Kamakou Preserve in East Moloka‘i, each carrying a handful of fortunate hikers. The road to Kamakou begins just outside of the town of Kaunakakai, but it is neither marked nor paved. Although you can get there on your own, it’s not recommended, and impossible without a four-wheel-drive vehicle. “We tell people they can go, but if they get stuck we’re not going to come and get them,” says Ed Misaki, the Conservancy’s director of Moloka‘i programs. And with Moloka‘i’s reputation for sketchy cellphone reception, it’s not a promising proposition.

The guided hikes have concluded for the season, but Ed and senior science and cultural advisor Dr. Sam Gon have offered to take me on a private excursion for the sake of this story. The weather is dazzling, with clear blue skies and a cool breeze. The road to Kamakou cuts a swath through verdant pastureland that’s been refreshed by recent heavy rains. The partially cloud-obscured summit of Kamakou, Moloka‘i’s highest mountain peak — and the preserve’s namesake — looms mightily in the distance.

Established in 1983, Kamakou Preserve was The Nature Conservancy’s first conservation easement in Hawai‘i. These 2,774 acres are home to more than 200 species of native plants, most of which can be found nowhere else in the world. Kamakou is part of the East Moloka‘i Watershed, which encompasses more than 30,000 acres of rain-forested mountains, remote valleys, and towering sea cliffs. At the heart of Kamakou is the origin of Moloka‘i’s primary irrigation system; a five-mile tunnel continuously delivers fresh water from the source at Kamakou to the 1.4 billion-gallon Kualapu‘u Reservoir. 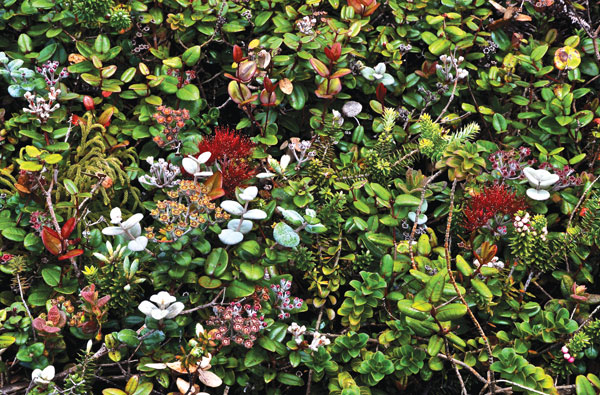 It takes about an hour to traverse the teeth-rattling, rut-strewn road to Kamakou. In some of the dicier spots, fresh gravel has been spread across the deeper potholes. Ed says this recent improvement has put the road in “the best shape it’s ever been,” causing my stomach to lurch slightly at the thought of what it was like before.

We park at a small clearing and gather around the beginning of a boardwalk built by the Conservancy in the mid-1980s to prevent human foot traffic from damaging the native plants. “When we started managing the preserve, we realized we had to do something to protect Pepe‘opae Bog — the oldest bog in Hawai‘i — which we’ll see as we hike through Kamakou,” Ed says. “We came up with the idea of a simple boardwalk, and it worked! So we decided to boardwalk the entire trail. It was the first of its kind in Hawai‘i, and boardwalks in other preserves have been modeled after this one.” 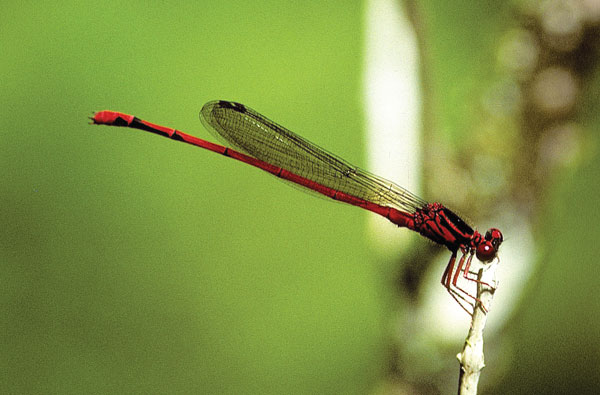 Constructed with new-growth redwood planks that have been laid end to end, the boardwalk extends for one and one-half miles, but it’s only six inches wide. Although metal mesh attached with u-nails provides traction, treading on the boardwalk is like teetering on a gymnast’s balance beam — only in this case, a misstep can result in being swallowed up to the calf — or higher — by slimy mud. “Try not to look down,” Ed advises. Despite his counsel, I manage to accidentally step off the boardwalk into deep muck twice during the hike.

“Kamakou is a superb example of an intact native forest,” Ed says. “Everything that’s here should be here.”

“The native forest is the foundation of Hawaiian culture,” adds Sam. “Our ancient oli [chants] andmo‘olelo [stories] allude to what’s found up here, and every single thing living in this forest has a Hawaiian name and a significance to us today.” He cites as example ‘ohi‘a lehua, the most dominant tree found here. “We believe it’s the physical manifestation of the god Ku, representing governance, leadership, and warfare. This tree endures through all types of weather, and lasts across all seasons. It gives us strength. If these treasures aren’t preserved, our culture will begin to erode.”

The Nature Conservancy engages in what Ed calls “passive restoration” — preventing threats from entering the ecosystem. Two of the largest threats are feral goats and pigs, and Ed and his team have erected miles of fencing to keep these destructive animals from entering the most vulnerable areas.

Kamakou’s boardwalk begins in a mesic (moist) forest characterized by blankets of bright green uluhefern that stretch as far as the eye can see. “Pay attention to when the uluhe is no longer present,” Ed says. “That’s how you’ll know when we enter the wet forest.”

Ed tells me the native forest is composed of three different layers: trees catch water from clouds and rain, which drips onto ferns that act as “shock absorbers” to slow down the water so that spongy moss — the lowest layer — can absorb the maximum amount of moisture. “This system allows for water to seep slowly into the soil, rather than running off,” he says. Grabbing a handful of earthy moss, Ed squeezes it, and water gushes from it onto the ground.

Next, Ed stops to point out wahine noho mauna (woman residing on the mountain), a feathery fern that grows on tree trunks. Sam shares a humorous tale of ancient Hawai‘i related to this plant. “If you were a bird catcher, you’d spend weeks in the forest,” he says. “Your friends would pity you because you were away from your wahine [woman] for so long. You’d reply, ‘Oh no, I was surrounded by the wahine noho mauna!’” As if applauding Sam’s story, a brilliant crimson ‘apapane (Hawaiian honeycreeper) flies by, captivating us with its canary-like melody.

We cross an invisible boundary where uluhe gives way to dense moss. The ambient temperature falls several degrees, and you can actually smell the heightened moisture in the air. “Do you feel it?” asks Ed. “We’re now officially in the wet forest. Look at the wahine noho mauna — can you see how much bigger it is?” Ed’s enthusiasm for plants is contagious. “On hikes, I want everyone to learn the name of five plants.” I perform a quick mental recap: uluhe, wahine noho mauna. . . . It seems I’ve got a few more to go. 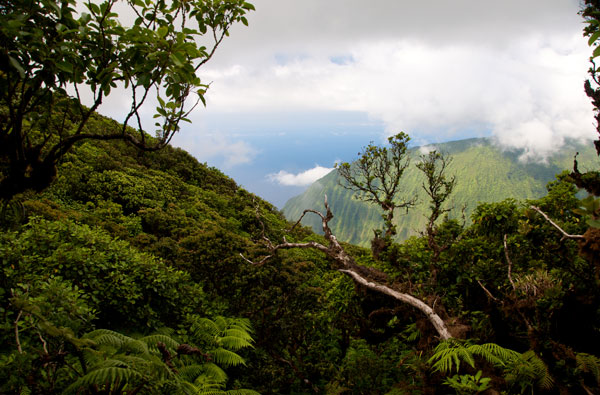 We round a corner, and suddenly the landscape changes dramatically: the towering forest canopy and dense moss are replaced by low-growing vegetation. A metal sign mounted on wood next to the boardwalk announces that we’ve arrived at Pepe‘opae Bog, and reminds us this is a delicate and fragile ecosystem. “Here in Hawai‘i, bogs occur over volcanic plugs where the water is unable to seep through,” Ed says. “You’d think a bog would be concave, but this one is mound-shaped because it’s been built up with organic layers of sedge, moss, and grasses. It’s like the ‘mother sponge’ of the forest.”

Sam points out lehua makanoe (lehua of the misty face), a low-growing shrub covered with luminous spiky red flowers. “This flower is frequently mentioned in hula,” he says, “and the bog is laden with this culturally important plant. It’s a powerful symbol of aloha. Like ancient Hawaiians who huddled together for warmth in the bog’s mist, so do the lehua makanoe.” Next, Sam shows me the green ‘oali‘i makali‘i(toothbrush fern), which could easily be overlooked because of its diminutive size. “This plant may be tiny, but it’s extremely meaningful in Hawaiian culture,” he says. “As the fern matures and turns brown, it signifies the beginning of the makahiki [harvest festival] season, when the rains come and the life of the land begins again. There’s a story associated with every plant in the Hawaiian forest, and that’s why it’s vital we protect these lands. If we lose these stories, it would be like losing a library.”

Once through the bog, we return to the wet forest, and Ed stops to admire a lush thicket of pa‘iniu, a native lily with a rosette-shaped base from which emerge long, spiny leaves. “See this?” Ed says with a broad smile. “It’s a perfect example of how our efforts are paying off. Piglets like to eat the center ofpa‘iniu, so seeing it proliferate like this means we’re doing a good job of keeping the pig population down.”

The boardwalk hugs the contours of the mountain, becoming steep and slippery in places. After one last ascent, we arrive at our destination: the stunningly beautiful Pelekunu Lookout, where Mother Nature has blessed us with a nearly clear view of one of the remotest valleys in the Hawaiian Islands. Late-morning cloud cover hovers over five lush green, deeply etched ridgelines that snake into the distance, ending with 4,602-foot Oloku‘i, which Ed describes as one of the most pristine mountaintops in Hawai‘i.

Up here, the wind is bracing, and Ed explains that’s due to a natural phenomenon known as “orographic uplift,” which occurs when moisture-laden wind hits the island and rises rapidly up the mountainside, creating clouds.

It’s time to retrace our steps. As we pass once more through the bog, Sam points out wawae‘iole, an unusual form of club moss found only on Moloka‘i. The Hawaiian name for this moss translates as “rat foot,” a fitting description for a plant whose fronds resemble a cluster of rats’ feet. (I’ve now become an overachiever, having learned the names of six plants today.)

It’s on this return trek that my right foot slips not once, but twice off the boardwalk into the surrounding sludge. Fortunately, the only bruising is to my ego.

Back at our vehicles, Ed sums up how he views his responsibility at Kamakou Preserve: “I see myself as a ‘table setter’ for the next generation, so they’ll have an easier time improving management practices to protect our forests.” Adds Sam, “There’s a tremendous amount of ‘ike [knowledge] held in our native forests, and I’m thankful we can go to Kamakou and see the living manifestations of theakua [divine] of Hawai‘i nei [beloved Hawai‘i].”