At the north end of Kā‘anapali Beach Resort, between the Aston Maui Kā‘anapali Shores and the Westin Kā‘anapali Ocean Resort Villas, sits Kahekili Beach Park, named for Maui’s last, heroic king. For the past seven years, Kahekili has also given its name to a marine management area that stretches from Pu‘u Keka‘a (Black Rock) north to Honokōwai Beach Park.

In the memories of Mauians, the reef at Kahekili has always been exceptional. Coral, the stuff of reefs, grows copiously here in mounds and plates and fingers, in cauliflower shapes and nubbly flats. Though it looks like rock, coral is a tiny, flowerlike animal, one that forms colonies that grow over rocks and other hard surfaces, carpeting the floor of the nearshore ocean. In many places, everything beneath you in nearshore waters is alive — and fragile — which is why the only good place to stand in the ocean is on sand.

At Kahekili, the reef unfolds in undulating fields of green and yellow and patches of blue with hints of pink here and there. For as long as anyone could remember, it grew abundantly and created bed and breakfast for countless fishes, urchins, eels, octopuses, and marine snails. Without the reef, ever growing, there is nowhere for many fishes to take shelter, and for many of them, nothing to eat. Indeed, the Hawaiian creation story, the Kumulipo, states that the firstborn of all creation was the coral animal, or polyp. On the back of that small, translucent creature was built the world.

In the 1990s, as development grew, snorkelers and divers, fishers and swimmers — residents and visitors alike — came to Kahekili in increasing numbers. Scientists like Dr. Eric Brown, of the Pacific Whale Foundation and later the University of Hawai‘i at Mānoa, Russell Sparks of the state’s Division of Aquatic Resources, and Dr. Ivor Williams (then at DAR, now with the National Oceanographic & Atmospheric Administration) started to keep a closer eye on the reef. Those observations continue today as part of the Coral Reef Assessment and Monitoring Program, based at the Hawai‘i Institute of Marine Biology. The program’s acronym, CRAMP, owes a great deal to Dr. Brown’s legendary dry sense of humor. 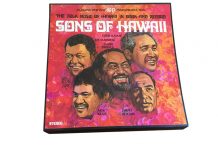 The Story Behind The Sons of Hawaii