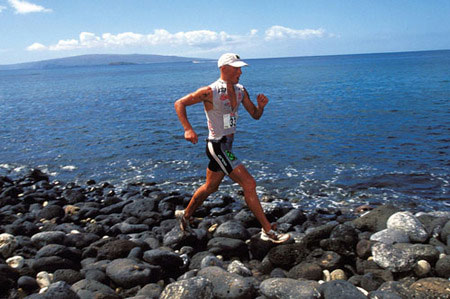 On a particularly masochistic kick this spring, I made the rash decision to enter a biathlon. No, not the Olympic one where you cross-country ski and shoot at targets—what a random combination of events, I always thought—this was the kind of biathlon one can actually do in the tropics: swimming and running, half a mile and four miles, respectively. With running shoes in hand and regret for not training (at all!) in my heart, I headed down to Wailea on an April Sunday for the Easter Bunny Aluminum Man Biathlon, this year’s second installment of the beautifully named “Not-So-Serious Series.”

From the tongue-in-cheek Aluminum Man circuit (seven take place each year) to the seriously sadistic Nissan Xterrra World Championship, Maui holds something for every athlete. “Each sport—running, biking, swimming—has a different feel,” says Nancy Robberson, who, along with husband Jami Kimmel, directs the Aluminum Man biathlons. “Most athletes here are such cool people. There’s very little of the whole prima-donna thing going on; people are sweet and down to earth. It’s like a family.” Robberson, a Maui High School history teacher, produces a comprehensive calendar of race events for Valley Isle Road Runners. “We coordinate with all the race directors,” she explains. “There’s a core group of athletes who want to go to these events. It’s great not to have them conflict. When you get together at races, it feels like a big party.”

The racing scene is alive and well on Maui, one of those rare places where world-class athletes can train and compete either in tropical heat or at altitude. But then you have events like the Easter Bunny Biathlon, where I counted at least 10 of the 40-or-so competitors holding masks, snorkels, and fins before the swim. To my knowledge, I was the only one entering the salty, salty ocean without eye protection: not something I would recommend, in retrospect.

Robberson and Kimmel carry on the Aluminum Man series in memory of Jaiom Berger, a stellar Maui athlete and the originator of the events, who was killed by a drunk driver in 2001. “Any athlete that’s been on the island for a long time knew Jaiom,” says Robberson. “He started Aluminum Man out of the goodness of his heart. It’s an honor to keep it going because it’s like having his spirit there with us. We know he’d be happy seeing all these people having a great time and not taking themselves too seriously.”

Continuing Berger’s ethic, elite athletes and people just in it for fun mesh together comfortably on Maui. “We don’t even care if they finish the course,” says Robberson, a self-described hard-core athlete, who finished eighth in the Easter Bunny, “as long as they’re being safe.” The field draws all levels—from Ironman qualifiers to, in Robberson’s words, “the weekend warriors.” After standing in a circle and holding hands in honor of Berger, the whole ragtag crowd lined up and sprinted, jogged, or ambled into the water at Robberson’s signal. We swam two laps around a buoy-marked course, followed by a run down the road to Makena and back—the highlight was watching competitors try to carry the Easter eggs. Robberson had hidden a bunch of the hard-boiled variety, and runners were stuffing them in pockets and even bras by the handful. (The male and female finishers retrieving the most eggs won goodie baskets. How in the world did that woman carry 10 hardboiled eggs for four miles?)

But enough tomfoolery; the Aluminum Man series is great fun, but it’s not Maui’s only event appealing both to Olympians and those of us who’d rather watch them from the couch, beer in hand. A good example is the Hana Relays, a 52-mile run from Kahului Airport to the Hana Ball Park, happening this year on September 9, covering 617 curves and 56 bridges. That distance is divided up among teams of six, each member running three sections throughout the day.

Robberson describes the day as “a running party. You have both super-competitive teams and people who don’t run at all and then come out for the Hana Relays,” she says. One of these ad-hoc runners is Ha‘iku resident Mino McLean, who has been doing the event since she cofounded the coed Pink Ladies team four years ago. McLean is far from a daily runner. “A couple of years ago,” she says, “I’d been in Athens watching the Olympics, and when I got back to Maui, the Hana Relays were the next weekend. I could only run two of the legs.”

Like many teams, the Pink Ladies run in costume: pink attire and wigs. After running the most difficult legs (including one that climbs 2.5 miles out of 3), each year’s anchor runner traipses into Hana Town in a prom gown. Many teams decorate their one allotted van with gusto, and the staggered starts ensure a communal arrival in Hana, where Race Director Joe Alueta gets a band to play every year. “It’s quite an eventful day,” McLean says understatedly.

Running events for everyman (and woman) by far outnumber swimming or biking races on Robberson’s calendar, with a calabash of fun runs ranging from Lahaina’s Front Street Mile—the shortest-distance event in the race-filled Maui Marathon weekend—to the Thanksgiving Turkey Trot, which offers 8.6- or 16-mile runs. You can dress up in costume for the Runner’s Paradise Halloween Run (this year it’s on Saturday, October 29) or raise money for cancer research in the Terry Fox Run/Walk.

Whatever your age, skill level, and competitive drive, Maui offers plenty of opportunities to put one foot in front of the other. That being said, amphibians and “cyclophiles” have options too. The Kapalua 1-Mile Swim hits the water on July 23, and the fervently fish-like can splash to their hearts’ content in the Lana‘i Channel Crossing swim relay in September. Pure cycling events are a little scarcer. Although we do have some great bike paths, I can personally attest to the difficulty of riding on Maui. (I ride to work through all those Kahului stoplights.) Still, the Century Ride in November, starting in Makena, will satisfy any curiosity you might have about how long it takes to ride your bike 100 miles in tropical sun.

But Maui’s most celebrated bicycle race is August’s Cycle to the Sun, which climbs from Pa‘ia to Haleakala’s summit. Drawing cyclists from the mainland and beyond (last year, 30 percent of the field was from outside Hawai‘i), Cycle to the Sun is a fundraiser for Ka Lima o Maui, a vocational rehabilitation center for adults with disabilities. Have you ever wondered what it feels like to ride from sea level to the top of a 10,000-foot volcano over a 36-mile span? This is your chance—if you’re prepared. “Some people say it’s the steepest road on earth,” says Ka Lima Executive Director Chantal Ratte, who won the women’s division a few years ago. “To gain that much altitude, you have to do some degree of training—I wouldn’t recommend just jumping on a bike and going up. It’s a grueling race, but it’s spectacular.” Participants range from “very serious cyclists” to leisure riders who take their time and enjoy the scenery. The $200 entry fee can also be raised from pledges—or teams of three can divvy up the miles for $300 per team. If you’d rather help with the event while getting a great view of the action, Ka Lima is always looking for race volunteers. (Call 808-244-5502 for details.)

I thought my legs were burning when I crossed the Easter Bunny Biathlon finish line; I can’t imagine the pain the world’s top athletes must go through when they compete in Maui’s die-hard races. For starters, there’s the Nissan Xterra World Championship, which serves as the championship finale of the entire Xterra Off-Road Triathlon series. Participants have to qualify for the Champion/Pro course (1.5K ocean swim, 30K mountain-bike ride, and 11K trail run) or the shorter Sport course. To anyone who’s completed a triathlon, those might not sound like huge numbers—it’s not Olympic distance. The rub lies in the terrain; the run is a mostly uphill trudge through uneven ground, and the bike ride traverses razor-sharp lava. “I’ll never do it again,” says Robberson, who took the challenge a few years ago. “You have Ironman qualifiers who won’t do Xterra. If you’re not an amazingly technical mountain-bike rider, you’ll be tearing off chunks of skin on that ride.”

As for me, I’m happy I dusted off my old running shoes and got back on the road, at least for one day. I might not use them again until the next Aluminum Man, but at least I got outside on a beautiful Sunday morning with some inspiring athletes, and I had fun. And that’s really the point of all this madness. We live on a beautiful island; what better way to see it than with sweat dripping down your face and lactic acid coursing through your legs?

For details and contact information for all the events mentioned in this story, visit  www.virr.com/calendar.php.