When space turned around, the earth heated
When space turned over, the sky reversed
When the sun appeared standing in shadows
To cause light to make bright the moon
When the Pleiades are small eyes in the night,

Darkness of day, darkness of night
Of night alone

When I first heard the lyrical lines of the Kumulipo read aloud in Hawaiian ethnobotany class, I was captivated. Composed by an ancient people populating the most isolated large island chain on earth, the chant hints at evolutionary theory and touches on the tenets of modern physics. Delving into its 2,000-plus verses, I began to appreciate what it truly is: the magnum opus of Hawaiian literature. Brimming with passion, politics, and wit, and rooted in an embracing spirituality, the Kumulipo is a rare window into Hawai‘i’s indigenous cosmology.

Composed as a genealogical chant, the Kumulipo tells a dynamic natural history of Hawai‘i. The chant starts in darkness, witnesses the emergence of nearly every life form in the Islands, recounts a sort of “greatest hits” of Hawaiian mythology, and concludes with the birth of Lono-i-ka-makahiki—the name of both the Hawaiian god of the harvest and a deified chief. It’s not the only such genealogical chant in existence in Hawai‘i, but it’s regarded as the most significant. Known as Hawai‘i’s creation hymn, it’s been compared to the Hebrew book of Genesis and Hesiod’s Theogeny. In modern times, it’s been chanted on only a handful of occasions: at the birth and death of two prominent chiefs, and on the fateful arrival of Captain Cook, when he was received as the incarnation of Lono.

Three layers of meaning are woven into the Kumulipo, according to Hawaiian essayist Poka Laenui: literal (ho‘opukaku), metaphoric (kaona), and spiritual (noa huna). As a budding botanist, I was first grabbed by the chant’s literal aspect.

The first eight chapters of the Kumulipo take place during a period of cosmic darkness, or lipo. In the eighth chapter, humans appear, marking the start of the period of ao, or daylight. From primordial slime springs forth a fantastic progression of species: coral polyps give way to marine invertebrates, seaweeds, plants, fish, birds, mammals, and finally humans. Sound familiar? It’s a rough sketch of evolution. The chant’s similarity to Darwin’s theories prompted nineteenth-century German anthropologist Alfred Bastian to bring a copy of the chant back to Europe, as supporting evidence for the then-revolutionary hypothesis.

Aside from beating Western science to the evolutionary punch by at least a century, the Kumulipo also predates Einstein’s time-space continuum theory. The concepts of time, current, and space are mingled in the single word au, invoked several times in the chant’s opening lines. The movement of au creates the universe, after which native species emerge in pairs, one as the parent or guardian of another.

What did the early Hawaiians—those keen observers of the natural world—recognize in these species to warrant their pairings? Some share obvious characteristics, such as ‘akala, the native raspberry, and kala seaweed: both are prickly. Other pairings are not so obvious. I ask modern-day Hawaiian plant expert Dr. Art Mederios what he makes of the ancient pairings. His answer surprises me.

“I’ve been frustrated by the Kumulipo,” Mederios says. “I’ve tried to apply my fairly strong Western mind to it and I come up with gibberish.” The species couplets aren’t necessarily scientific, he says. Further complicating comprehension, many of the plant and animal names used are unfamiliar to modern Hawaiians. “In many cases, I’m not sure we know what’s being described. I have more questions than answers at the end of it.”

Still, he’s always felt drawn to the poem—particularly the stanzas celebrating the balance between land and sea, fresh and salt water, darkness and light, masculine and feminine. “It’s ecologically brilliant,” he says. “It’s an amazing work. I have all the versions by the different authors.”

All the versions? Until this point, I had only read one—Martha Beckwith’s translation of King Kalakaua’s text. Time to dig deeper.

Hawaiians considered such genealogies to be of great value, capable of bestowing power on their owners. 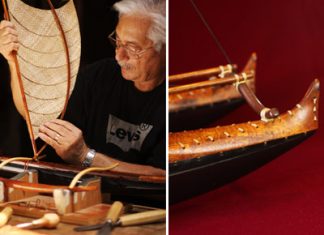 A Carver of Canoes