If you dine out often, as I do, you may have noticed over the past few years that pork bellies became popular on gourmet wine-dinner menus, and that that once-maligned childhood favorite, mac ‘n cheese, was suddenly sporting the scent of truffles and taking center stage at five-star dining establishments.

Trends, like human nature, are often contradictory. In 2011, some Maui restaurants laughed in the face of “nannified” food-labeling mandates, responding with Don’t Ask/Don’t Tell highly caloric (and oh-so satisfying!) menu items. Others delighted diners by promoting the trend known as Food for Sex (highly nutritious foods that promote vigor and energy).

Every year the National Restaurant Association, various food publications, and influential food-trend watchers release lists of what they believe is de rigueur. Thirteen of those trends are well represented on Maui by restaurants that are also multiple Aipono Award winners. No surprise, since these trends are all about respect for the environment and a playful celebration of what’s best in life. Call it “culinary aloha.”

Maui Restaurants That Set the Trends 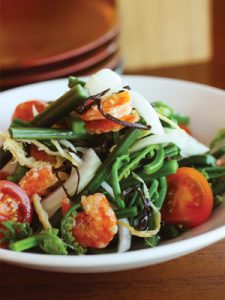 This year’s Restaurant of the Year, Star Noodle, has been spot-on at spotting food trends from day one. (Star also captured the Gold Aipono for Most Innovative Menu, Best Epicurean Twist on a Local Favorite, and Best Asian.) It was the ever-affable Sheldon Simeon, Aipono’s 2011 Chef of the Year, who first turned us on to Fried Veggies, using fiddlehead ferns and Brussel sprouts, then cranked up the volume on so many delicious variations of Noodles that we’re eternally grateful everything comes on a Small Plate!

Star’s daily specials often veer into Daredevil Dining territory, offering fare outside even the most adventurous gourmand’s comfort zone, such as ahi belly and fried onions or sous vide rib eye with pureed blackberries. As a result, my appreciation for unlikely combinations expanded in 2011 (as did my waistline). It’s no secret that Chef often goes Pork Belly Up—he even created a controversial (but appealing) deconstructed version of the dish for the Noble Chef event in October 2011.

Inspired by his Hawaiian heritage and Asian influences, Chef has taken the concept of Asian Fusion 2.0 to a new level. Terms like usukuchi, har gau, faux-nagi, pickled ogo and nuoc cham now roll trippingly off the tongues of Star Noodle social-media fans. As for Being Big and Acting Small, even after recently winning Food & Wine’s “People’s Best New Chef” award for the Pacific and Northwest, Chef Sheldon posted on his Facebook page, “This award also represents all of the amazing chefs here in Hawaii. I am humbled by your talents and your continued efforts to push Hawaii culinary arts to the next level.” What a chef! What a restaurant!

Restaurateur Mark Ellman, who won this year’s Lifetime Achievement award, opened Honu in 2011 with eyes wide open to the economic times, fueled by an overriding desire to bring Local (Somewhere) seafood to Maui, including that locally unobtainable Food for Sex favorite, raw oysters. Ellman also helped me to overcome two of my few food aversions—Fresh Every Day kale salad and fried pig’s ears, both of which my parents urged me to try back in my youth, to no avail. So, for teaching an old chowhound new tricks and dishing up what’s good for me in such a delectable way, I bestow on Chef Ellman my own Daredevil Dining award.

Honu, this year’s Silver Award winner for Most Innovative Menu, also nets my Beverages with Benefits award for its enchanting Cucumber Breeze cocktail and other Honu drink specialties made from health-enhancing ingredients such as lemongrass, ginger, and agave nectar. And don’t let that Meatless Monday powerhouse, lentil quinoa burger, fool you into thinking Honu is all goody-goody-goodness and no fun. Its Don’t Ask/Don’t Tell mac ‘n cheese (also a Comfort Food Comeback) is utterly sinful and so worth it! 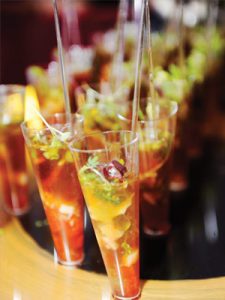 Noodles, Fry Time and Daredevil Dining are all trends represented on Japengo’s noteworthy menu, with China Town chow fun, Singapore chili crab, and eel and avocado, respectively. Best of all, many dishes are available Shrink Wrapped as half portions for half price. 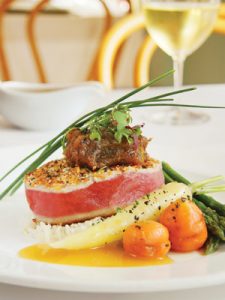 Maui’s most stylish restaurant consistently wins multiple Aipono awards—this year, Gold for Best Service and Best Wine List; Silver for Best Bar, Best Steak and Best Dessert. It also nets a spot on the trendy list primarily because Jurg Munch personifies Be Big, Act Small. Dining at Lahaina Grill is like attending a dinner party at the estate of a wealthy yet humble friend. Every detail is perfect, you are treated like royalty, yet you feel right at home.

Plus, nobody makes a better triple-berry pie. Lahaina Grill has been serving that gem for over a decade, long before Pie emerged as a trend. The same goes for sourcing the best possible Local (Somewhere) ingredients. Lahaina Grill uses locally grown products whenever possible, but when it’s necessary to stretch further for cherished ingredients, Jurg sources them from producers who really care about being the best in their field. Just like Jurg. 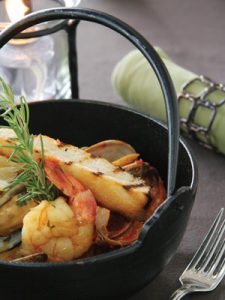 This year, the Maui County Farm Bureau bestowed its Friend of Agriculture award on Tylun Pang—fitting recognition for the chef whose restaurant also won an Aipono Gold for Best Menu for a Small Planet, and Silvers for Best Hawaii Regional Cuisine and Best Epicurean Twist on a Local Favorite. Pang’s restaurant at the Fairmont Kea Lani is one reason I predict that Hawaiian Cuisine will be the next big foodie trend.

In 2011, the newly redesigned restaurant did away with the old concept of “fusion,” whereby chefs combine ingredients and spices from various cuisines and blend the tastes into something entirely new. Instead, Pang created a menu that represents Maui’s food since the plantation era, with multiple separate-but-equal dishes that retain the original authenticity of each. You’ll find Portuguese bean soup on the menu alongside Korean spicy chicken, sharing the table with oishi sushi. It’s a veritable beachside potluck every night of the week, with each of the ethnic flavors represented.

Appropriately called Plantation Cuisine, it’s neither Scottish, Asian, Filipino, Portuguese, nor Hawaiian. It’s da kine; in a class by itself. 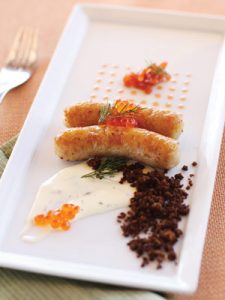 Last year JoJo Vasquez came back to where he once belonged after spending a few years on Oahu helping out his mentor, “Iron Chef” Masaharu Morimoto. Thanks to the well-traveled and inventive Chef Vasquez, nearly everything on Banyan Tree’s worldly menu represents an inventively delicious trend. The faultless fish he serves netted the restaurant this year’s Silver Aipono for Best Seafood.

To satisfy a demanding clientele, an entire section of Chef Vasquez’s menu is devoted to “Foods of Health,” while another is called “Contemporary Appetizers,” and begs the question “How many trends can you fit on one menu?”

Love the flavor of meat, but also crave health benefits? Try the seafood sausage. Want to improve your stamina for romance? Pacific oysters on the half-shell will do it. Indulge as if you’re on holiday and try the pork-belly steamed buns, big winners in the Belly Up category. Are you a culinary daredevil? Order the sous vide beef tongue, the most unexpected (and surprisingly tasty!) menu item on Maui. 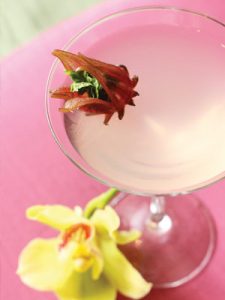 At the beautiful Four Seasons, recipient of this year’s Excellence in Sustainability award, you can savor Duo’s Local (Somewhere) raw bar, where the crab, prawns and oysters are sauced with Asian Fusion 2.0 winners such as kimchee aioli, ponzu-and-lime sauce, or brandy aioli. It’s a perfect Daredevil Dining option, and since it’s open Thursday through Sunday, you can get a jump on Meatless Monday over the weekend.

Across the way, the elegant Lobby Lounge, this year’s Silver Aipono winner, delivers an impressive Beverages with Benefits roster, including organic and gluten-free beers, biodynamic wines, and cocktails with herbal components.

Kudos to the many trendsetting chefs on Maui! They keep up with what’s hot, and their creativity and passion have the rest of the world sitting up and taking notice.