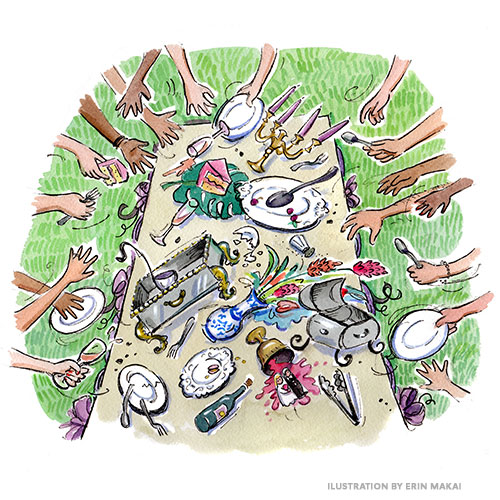 He’s catered countless weddings over the years, but there’s one reception Daniel  Radovcich, executive chef of The Beast & Spoon, won’t soon forget. The bride and groom had requested a buffet dinner so their one-hundred-plus guests could graze throughout the evening. But to their horror, the moment dinner was served, the ravenous crowd attacked the buffet line en masse, piling their plates with food. A quick-thinking Daniel elbowed his way in to police the free-for-all. “If I hadn’t, they would have run out of food,” he recalls. Daniel says it’s a common blunder, and one that is easily avoidable. If you have your heart set on a help-yourself meal, work with your caterer to craft a portion-control plan. Ask for a designated server to regulate the flow of traffic to and from the buffet table, opt for smaller plates, and have the more desirable menu items (and those that can be readily stockpiled, like shrimp cocktail) strategically placed at the end of the buffet line. And a catering rule of thumb? Always plan to have more food than you expect to be consumed. That way, you can accommodate voracious appetites, as well as any surprise guests who forgot to RSVP.

With more than a decade of wedding receptions under his belt, DJ Del Sol knows how to craft a crowd-pleasing playlist. So, when a bride and groom insisted on a single genre—indie rock—he tried to gently dissuade them. “When you’re planning your music, you should think about your guests, not just your own musical tastes,” he explains. But the couple was adamant, and Del obliged. As he anticipated, on the day of the wedding, no one but the newlyweds graced the dance floor. Visibly bewildered by the unfamiliar music, the couple’s guests remained seated throughout the evening.

For any reception, Del says, not only is a versatile playlist a must; so is a strategic venue layout. Too often, he finds himself (and his speakers) awkwardly stationed in a far-off corner next to a table of older wedding-goers. Predictably, when the music starts, they ask Del to lower the volume, and moments later, a younger guest will approach him and say it isn’t loud enough. The intergenerational tug-of-war can be prevented by devising a layout that puts the deejay as close to the dance floor—and as far away from Great-aunt Edna’s sensitive eardrums—as possible. And better yet, Del adds, you’ll have optimal sound as you dance the night away.

“Leave it to the professionals. We know what we’re doing,” Asa says. And let a wedding coordinator do all of the heavy lifting for you. They’ll reduce the stress by handling the logistics, from reserving the venue to booking a caterer, florist, hairstylist, and photographer. But even if something goes awry, Chris says, never lose sight of one thing: “The point of the day is to celebrate the love of two people. If you achieve that, it’s a success.”