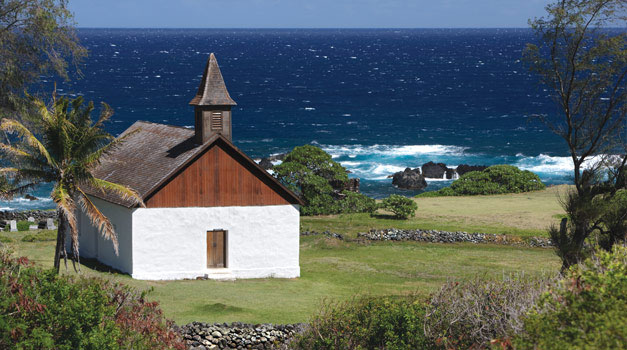 Wedged between the looming, leeward shoulder of Haleakala volcano and the borderless blue ocean, the rural district of Kaupo is East Maui’s version of the Wild West. Since 1859, Huialoha Congregational Church has stood sentry on this wind-whipped coastline, a reminder of humankind’s nobler qualities: self-sacrifice, hospitality, and simple joy.

It’s the rare individual who’s attracted to this remote and rugged region—as its sparse population attests. Stephan Lefebvre looks the part, in his too-big ten-gallon hat and puka-shell necklace. The Montreal native came for six weeks last year to ride horses across the sun-baked lava plains. While out carousing with Kaupo Ranch paniolos (cowboys), Stephan learned that their church needed fixing: rotten floorboards. 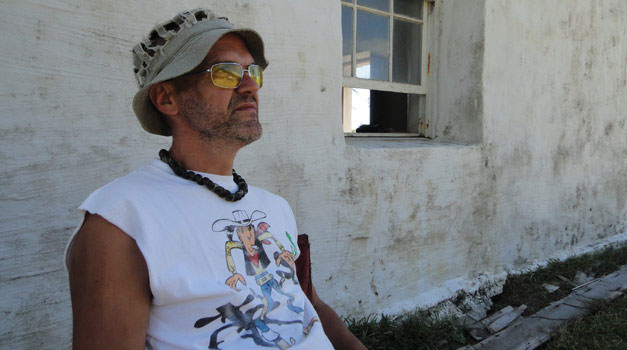 Stephan offered to help. But before repairs could begin, Carl Lindquist, the beloved, longtime Hana resident who was coordinating the effort, disappeared—swept out to sea in a Thanksgiving Day flash flood, along with Rae, his wife of fifty-two years. To honor Carl, Stephan adopted the restoration project. The French-Canadian found himself taking the lead, abandoning his vacation to help patch up a piece of history.

Huialoha seems to have that effect on people.

The humble, whitewashed sanctuary on tiny Mokulau Peninsula is a hardy treasure. Built by Christian missionaries and their Hawaiian converts, its two-foot-thick rock walls have weathered earthquakes, storms, even the exodus of its people. For 150 years and counting, whenever the elements have taken too great a toll, Huialoha has summoned a cast of characters to its aid.

Last February, Stephan assembled a crew fit enough to refurbish the Sistine Chapel. Fine woodworkers and artisans from across Maui brought their families to camp over the weekend and work.

“We were expecting maybe twenty, twenty-five people,” says Stephan. “But over fifty showed up, including five professional carpenters.”

Good thing, because the floor repair became a floor replacement. Stripping the church to its bones, the volunteers realized that one weekend wouldn’t suffice. Too many pukas (holes) in the walls and roof. Salt-eaten door hinges and rattling window sashes begged for replacement. Plus, the crew enjoyed the camaraderie. While parents labored, keiki relaxed in the churchyard’s scant shade and fed nosy horses apples. After work was pau (finished) everybody ate. Huialoha, which translates as “gathering of love,” earned its name during these work parties, which are ongoing.

At least two of the volunteers may have felt a touch of déjà-vu. Retired paniolos Charles Kahaleauki Jr. and Carl Bredhoff—better known as “Uncle Chunga” and “Soot”—were around for the last rebuild, back in the 1970s.

From 1967 to 1982, Soot was the Kaupo Ranch manager—and Huialoha’s de facto moderator. “The jobs kind of went hand in hand,” he says. When the ranch opened in 1929, it more or less adopted the church; paniolos filled Huialoha’s pews and ranch supervisors looked after its business—what little there was.

Rich in aloha, the isolated community has always been short on cash. During the church’s construction, the presiding pastor bemoaned that his flock donated kapa (barkcloth), fish, and lauhala mats, but rarely gave money. It took several years to finish the church—and another ten to purchase its bell.

Though it’s hard to imagine, only 100 years ago this fierce landscape supported several thriving coastal villages. In its heyday, Huialoha held two standing-room-only services each Sunday. Latecomers listened through the windows.

In Born in Paradise, the late Maui historian Armine Von Temski recounts a funny event she witnessed as a child at Huialoha in the early 1900s. Her family traveled by horseback to hear a Hawaiian friend preach. Kane, unlike his barefoot congregation, possessed a fine pair of button-top boots, size twelve. In he strode, his fancy footwear admired by all. He sat down, slipped the boots off, and passed them through the window to his wife and children, so they could enjoy the same satisfying entrance!

By the time of Soot’s tenure, Kaupo was a ghost town. The promise of jobs elsewhere had drained the isolated area of its living pulse. The remaining handful of churchgoers made do with one afternoon service a month. They heard from traveling preachers of various cloths—Congregational, Episcopalian, even fire-and-brimstone Baptists.

“If it got boring,” says Soot, “you could look out at the mountains, the ocean, and get the message from there.”

The inside view wasn’t so pretty; years of neglect had taken its toll. “The church looked like hell,” says Soot. “It had canec [cheap paneling made from sugarcane] on the walls. It wasn’t even painted.”

In 1978, Soot teamed up with his longtime friend Carl “Linky” Lindquist to launch a campaign to restore Huialoha. Lindquist published a trade magazine for builders and asked his industry contacts to donate supplies. To raise operating funds, the pals drew on a few other lucky connections—some of the biggest names in Hawaiian music.

“Linky said, ‘We could do a concert with the Sons of Hawaii.’ That started it all,” says Soot. Eddie Kamae and several other well-known musicians agreed to perform a benefit for Huialoha at Honolulu’s Blaisdell Center. Kaupo ranch employees and their wives—a musical bunch themselves—traveled to Oahu to sing hymns.

People who had never heard of Huialoha fell in love with the church and its people. The sold-out performance raised $30,000. The funds allowed Soot, Linky, and their Kaupo friends, including Uncle Chunga, to rebuild the roof, steeple, ceiling, windows, and bell tower. 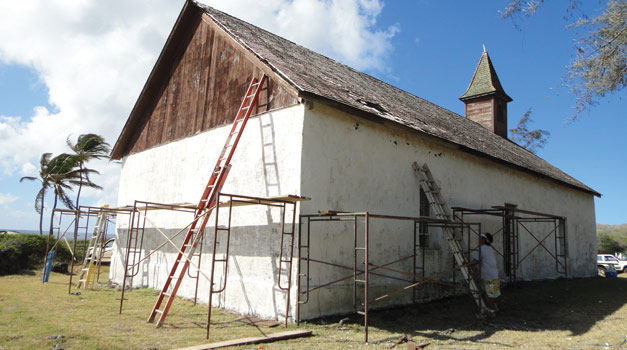 “We’d work one Saturday a month until it was all done,” says Soot. “It was really a labor of love, by everybody.”

One day, the crew unearthed a surprise: in a sealed door, they found a bottle stuffed with handwritten notes, some in Hawaiian. Messages dated February 9, 1942—a scant two months after the bombing of Pearl Harbor—talked of World War II and the hope for peace. One wanted future readers to know that, with the men away, “the women have done most of the work.”

The church must have a thirty-year clock ticking inside: major maintenance was necessary in the early forties, in the late seventies, and again today. Luckily, when work needs to be done at Huialoha, volunteers appear. And with the one-year anniversary of the Lindquists’ loss approaching, the commitment to restore the church Carl cared for is as strong as ever. The new floor is finished—a beautiful patchwork of rich hardwoods replacing the brown painted pine planks. Now the volunteers are eyeing the aged steeple and roof.

Nowadays, Huialoha’s churchyard welcomes stray horses and picnicking tourists who’ve violated their rental car agreements to explore East Maui’s wild “backside.” Passersby who peek inside the austere sanctuary see two rows of wooden pews leading to the altar, above which reads: “If ye seek me, ye shall find me.” On special occasions—Christian holidays, weddings, or funerals—the building bursts back to life, overflowing with worshipers from near and far.

For Stephan, the latest to carry the torch, the restoration is more about the future than the past. “ “The goal is to get the church back to life. When that heart starts to pump again, we’ve succeeded.”

Before he passed, Carl Lindquist reflected on the years’ worth of messages left by church visitors in the guestbook: “Leafing through . . . the often intense feelings that have been inscribed there, one realizes that the spiritual legacy of Huialoha lives on; that in touching its walls one can still feel the energy and dedication that went into their building; and that in the wind one can still hear devoted Hawaiian voices raised in songs of praise.”

Want to help? Send tax-deductible donations to: The Huialoha Restoration Fund, c/o Soot Bredhoff, P.O. Box 1069, Puunene, HI 96784. Or sign up to volunteer at Friends of Hui Aloha Church in Kaupo on Facebook or via the website – http://www.huialohachurchkaupo.org.