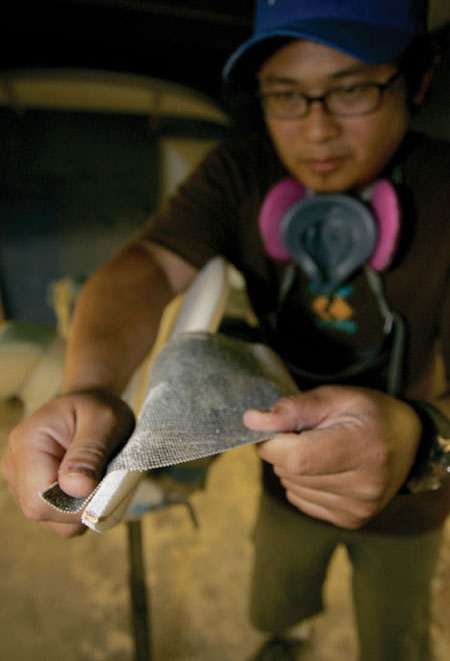 Even before Duke Kahanamoku’s world-famous Waikiki exploits a century ago, surfing was king here in Hawai‘i, the cradle of the Sport of Kings. On Maui, Duke’s legacy lives on in the swarm of surfers crowding our shores from Jaws to Launiupoko. All those surfers need boards to ride, a simple fact that has spelled ongoing success for Maui’s tight-knit group of professional surfboard shapers: a diverse collection of backyard dabblers, world-famous magnates, and just plain small-business people.

That was the case, anyway, until December 5, 2005, the day that has become known in the surf industry as “Black Monday,” when Gordon “Grubby” Clark announced the immediate closure of his California-based Clark Foam company. Clark had developed the ideal surfboard blank—the foam foundation a shaper sculpts into a board. The polyurethane material Clark had perfected was strong, light, and easy to carve. After 40 years of innovation, Clark had captured—some say bullied his way into—90 percent of the market, producing over 10,000 blanks a week.

Clark Foam also contained some nasty chemicals, and Grubby Clark cited pressure from environmental agencies in closing his factory. Fearing prosecution, he destroyed much of his homemade, one-of-a-kind equipment—including his estimated 70 molds, which covered the gamut of surfboard shapes and sizes. The ensuing panic shocked an entire industry.

Now, half a year after the unthinkable, Maui’s surfboard shapers have had a chance to step back and reflect on life after Grubby.

“The molds are all gone,” says Jeff Timpone, who has shaped boards from Clark Foam since 1968—and on Maui since the ‘80s. “And his method of injecting foam into the molds. And his oven; before Grubby, it took three to five days before the foam hardened enough [to work with]; he could do it in a few hours.

“I think it affected me mentally more than anything,” Timpone continues. “It was like losing an old friend, and it happened so quickly. I don’t have a second job—this is what I do. So when that plug got pulled, it sent me into a mental tailspin.” Custom surfboard shapers like Timpone are master craftsmen who tailor each board to the customer’s specific needs. In April, waiting for a shipment from an Argentinian foam company, he was still filling orders he’d taken in December, picking and choosing depending on which blanks were available.

Shaper Brent Edwards, owner of Maui Skimmers, was just back from a Costa Rica surf trip when he heard the news. Edwards had shaped both surfboards and his trademark product, custom skimboards (essentially a tiny surfboard for gliding through shallow water and riding shorebreak waves) exclusively from Clark Foam. In what became a sad irony, he had returned to Maui anticipating a busy Christmas rush. His custom-shaping business has since leveled off—at zero.

“It really hurt the industry right when it happened,” says Joey Goette, general partner at Moonshine Distributions, which not only provides both custom and stock boards for Hi-Tech Surf Sports, Hana Highway Surf, and other shops, but rents shaping bays to “local people who just want to shape boards.” Up until December, Goette and his business partner, Mark Puen, were going through 200 Clark Foam blanks a month.

Moonshine held a stockpile of 30 blanks in December—a few from Clark Foam and the rest from Australian companies. (According to Goette, the Australian foam was more difficult to work with, which was why they had put off using it.) Otherwise, they stayed in business by fiberglassing boards—the process of making a blank watertight—for other shapers. “The stock we had held us over just the right amount of time,” said Puen from his shop in early April, anticipating a new foam shipment the following week. “The last few weeks have really been hitting us hard.”

But adversity is a time for innovation, and Goette and Puen are adjusting by making more boards from expanded polystyrene (EPS) foam; Puen estimates that the company will eventually shift 40 percent of its supply to EPS blanks. EPS, which has been around for years as an alternative, is considerably lighter than polyurethane. This allows shapers to finish it with an extra-thick coat of fiberglass, making the board amazingly durable. On my first visit to his shop, Goette turned an EPS board deck-down on the concrete floor and stepped on it repeatedly; the nose flexed, and the board wasn’t damaged at all—out of the question for notoriously brittle polyurethane boards.

Less-toxic than polyurethane, EPS, which Edwards says is basically conventional Styrofoam, is also recyclable. Timpone expects his EPS-board production to increase, and Edwards has also experimented with the material in the few surfboards he’s shaped this year.

EPS foam does have its drawbacks, however—for one, its formation from millions of compressed beads. “If you shape it too aggressively,” says Edwards, “you rip the beads out and lose the smooth finish.” Glassing EPS blanks also requires a few more steps. The added labor cost plus the extra $30 for an EPS blank raises board costs significantly. Kim Ball, who owns Hi-Tech surf shops in Kahului and Pa‘ia, sees EPS boards as prohibitively expensive to carry en-masse. “Not that the labor isn’t there and not that the boards aren’t quality,” he says. “I just think the price will be too high for our customers.”

Matt Kazuma Kinoshita, who shapes Kazuma Surfboards, has no intention of surfing—or shaping—EPS boards. “To me, nothing can beat a polyurethane blank,” he says. “Surfers are used to a certain feel.” Kinoshita simply switched in December from Clark Foam to two Australian suppliers and didn’t miss a step; luckily for him, he’d had existing accounts with both companies, neither of which was taking on new customers.

Meanwhile, Neal Norris, who owns and shapes Valley Isle Surfboards in Kahakuloa, welcomed a break. “I don’t have a big mortgage to pay, so I considered it a chance for two or three months of just surfing my brains out.” he says, adding that he shaped a few boards for his kids and team riders “to keep them off my back.” Norris hopes to begin pouring his own supply of polyurethane foam by this summer, with a less-toxic recipe, and a converted aeronautical plant in Idaho slated as his factory.

Norris is, for the time being, less than concerned about the new blanks. “I’ve heard some guys grumbling about flat spots and rocker problems in some of the Argentinian blanks,” he says. “But for me, that’s what shaping is all about—you have to make your own lines.”

Edwards waxes similarly less-than-sympathetic. “A lot of shapers got really lazy over the last few years—myself included—relying on mold selection and shaping machines,” he says.

Clark’s mold selection was a valuable tool in speeding up the process. “My concern is the actual selection of blanks,” says Timpone. “I only hand shape—that’s what I’m known for. If the blanks are just slabs of foam, it makes my job a lot harder. If you knew Grubby’s catalog, you could order the blanks very close-tolerance. You’d still have to shape them, but you didn’t have to mow off so much foam.”

Still, Timpone is confident in his ability to bounce back. “It’s kind of exciting and a little stressful—but I’ve done enough boards. I think I’ll be fine. If the blanks are so hideous that I have to go to a shaping machine, there are shaping machines available.”

Timpone is not alone in his optimism. These are surfers, after all—people who instinctively adapt to difficult conditions: wind, choppy waters . . . and industry crises.

“The shaping community really pooled together to help each other out,” says Goette. Kinoshita, for one, has been distributing molds from his surplus and letting others use his shaping machines, which he says can almost duplicate the work of Clark’s molds. Far from defeated, he welcomes the newly open market as a positive development, causing increased competition and, in turn, cheap and superior blanks. “So far, the quality is better,” he says. “My team riders are saying the newer boards are the best ones I’ve ever made—they’re more lively and resilient in the water, and overall better than before.”

“There was a little bump in the road there for a while,” says Hi-Tech’s Kim Ball. “It was a wake-up call to everyone in the surfboard-making industry. People are taking better care of the boards they have and fixing up old boards—but if you’re strictly a new-board buyer, you’re still going to buy new boards.”

“You have to look at something like this as an opportunity, rather than as a doomsday,” says Edwards, who cites diversification as his solution. He has already set up a mass-production surfboard factory in Bangkok—an idea he’d already been toying with before the Clark Foam closure. He has also branched out into clothing and surfboard accessories, and expanded his skimboard line, bringing back old-style wooden boards and even developing a board made of foam blown from PVC-pipe plastic. Beach tests have been encouraging.

In fact, it’s difficult to be discouraged when considering the future—financial and otherwise—of a creative group who base their lives and livelihoods on the ability to ride waves. Though only time can determine whether the locally made board market will float or sink, Maui’s shapers are, true to form, gliding along. “Surfers are innovative,” Norris concludes. “We’re not just going to let things stop.”