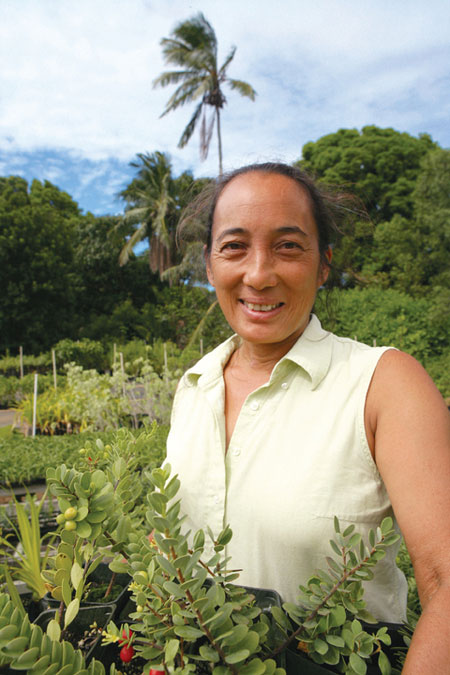 Pili grass may not have the fragrance of plumeria, or the dazzling colors of heliconia or kahili ginger. But when you come closer, you can see that the grass has its own slender, translucent, subtle beauty. Unlike plumeria, it’s an indigenous Maui plant, one that the original Hawaiians used for thatched roofs. Today, as Maui’s need for water grows at an unprecedented rate, pili’s drought-resistant qualities make it an ideal landscape ground cover that requires almost no maintenance and irrigation.

Anna Palomino, founder of Ho‘olawa Farms, and her handful of employees busily pack 15,000 pili plants they have propagated for a project in Makena, setting them into boxes laid out beneath a row of shade canopies. The shipment is just one example of how the farm, one of the island’s oldest native-plant nurseries, works to preserve and find modern uses for the oldest plants on Maui, the ones that most truly belong here, and, ironically, the rarest and most endangered.

The word ho‘olawa means “to supply.” It also commemorates the place where the farm began sixteen years ago: near Ho‘olawa Bay on Maui’s north shore, seven miles east of Ha‘iku, two miles down a four-wheel-drive road. Palomino, an expert propagator, knew she wanted to be in the nursery business. But it was her mentor, Rene Sylva, founder of the Maui Nui Botanical Gardens, who instilled in her a lifelong devotion to Maui’s original plants (not to be confused with the “canoe plants” brought to the Islands by the Polynesians).

“Rene was my original teacher and a native plant expert, a real special guy,” says Anna. “I would not be doing what I’m doing today without him.

“The native plants became Hawai‘i to me because they’re unique to the Islands. In my younger days, I hiked all over Maui with Rene. Certain plants still remind me of these special places and how beautiful Hawai‘i is.”

She also knew that the plants most visitors and residents wanted were brightly colored nonnative gingers and heliconia. She was clearly taking a risk with her plant choices and out-of-the-way location, and for years Ho‘olawa Farms attracted only passionate, “hardy and truly curious” devotees of native flora, she says. But the nursery was ultimately well-timed to take advantage of the 1990s’ wave of public and private efforts to preserve and restore native habitats throughout Maui Nui. Anna proudly told me, “Our business has grown about twenty times since we started.”

Ho‘olawa cultivates 150 species of native plants that represent the whole remarkable spectrum of Maui’s ecosystem, from the coastal areas to the low dry forests to the highlands rising toward Haleakala. As Palomino explains, the plants are not just “beautiful in a subtle Hawaiian way”; they also may have as-yet-untapped benefits for all of us. Ma‘o is a native cotton—remarkable to see in a state far removed from Dixie—which could, if introduced to other cotton stocks, increase disease resistance. Ho‘olawa’s lovely koa grove includes saplings, still bearing sawtoothed leaves yet to turn crescent, which are intended for Pu‘u Makua and other restoration projects on Haleakala’s southern slopes. The trees are not only beautiful in their own right, but will feed the revival of Hawaiian woodworking and canoe-building, and, mostly importantly, help restore the watershed.

These plants also come with remarkable genealogies. The rarity of some of the plants, and the stories of their restoration, literally stop me in my tracks. A rare lobelia rising above a table full of plants, an alula from Moloka‘i, comes from the seed of a single plant hand-pollinated in Kaua‘i by a botanist who discovered it while rappelling down a cliff. A delicate sapling ‘alani (citrus) at Ho‘olawa Farms had exactly one ancestor on Haleakala’s slopes; the species only exists today because, in the 1950s, agronomist D.T. Fleming collected that tree from the once-endangered Auwahi dryland forest, and nurtured it at his Pu‘umahoe arboretum. Since then a team that includes Fleming’s granddaughter Martha Moran, Palomino, agronomist Nellie Sugii, and research biologist Art Medeiros has worked to produce seedlings and restore the ‘alani to its ancestral home.

Ho‘olawa Farms is working hard to preserve Maui’s few endemic hibiscuses. The gorgeous koki‘o keokeo, a white flower with red stamens and yellow pistils, still has a presence in native forests, but the lovely red, nectar-rich kokia is extinct in the wild, the prey of feral pigs and goats. Palomino shows me where kokia grown in test tubes from seedlings germinated in culture labs have been grafted onto rootstock from other species; a grayish-brown border marks where the stems fused. Palomino hopes a grafting technique will be available soon that will allow future kokia to use their own roots.

Fortunately, many other native plants grow in sufficient numbers to be salable, from ‘ohia trees to native shrubs like ‘a‘ali‘i and ‘aweoweo, hala (pandanus, the ancient Hawaiian weaving plant), and beautiful golden loulu (fan palms).  Palomino told me, “The market is varied: private landowners who want natives that conserve water, resorts who want to put in landscaping, commercial landscapes . . . we’re kind of everywhere.”

Reforestation is part of Ho‘olawa’s business, from the dryland forest at Ulupalakua to the restoration of West Maui’s Honokowai Valley. Ho‘olawa plays a vital role in the regreening of Kaho‘olawe; sales to the Kaho‘olawe Island Reserve Commission now provide nearly 25 percent of Ho‘ola-wa’s revenues. Palomino feels especially connected to the long, Herculean effort to restore the island—devastated by cattle and goats, and decades of U.S. bombing practice—to its ancient status as a piko, or spiritual center of Hawaiian worship and culture, and to see it carpeted with native vegetation again. “We are grateful to be part of the effort to reestablish the essential nature of this island,” she says.

Palomino shows me a seed house where, beneath a glowing fiberglass roof, she and her workers prepare Kaho‘olawe-bound flora. The plants are grown above a pebbled floor to keep them clean, then treated with chemicals, natural if possible, to ward off any pests. They’re boxed and airlifted to Kaho‘olawe in dibble tubes, yellow-and-white plastic cylinders that can accommodate the plants’ long tap roots.

Ho‘olawa Farms provides the commission with a selection both of plants that grew before Western contact, and plants that flourished on Kaho‘olawe 200 years ago, before the twin disasters of overgrazing and military degradation. They include ‘aweoweo, ‘a‘ali‘i, koai‘e (a dry-forest dwarf koa), ‘ohi‘a, and alahe‘e. The choice of plants is based on charcoal samples analyzed in archaeological studies, along with a 1913 survey of island plants, and comparisons to sections of Moloka‘i and the leeward slopes of Maui. Paul Higashino, who in 2005 was environmental restoration manager for the Kaho‘olawe Island Reserve Commission, credits Ho‘olawa with “giving us the capability to be as close as possible to the original plants that grew on the island.” In restoring the original ecosystem, Higashino hopes the caretakers of Kaho‘olawe may, in some way, turn back time: bringing back   dryland vegetation to the slopes may foster more moisture and thus increase the greening rain that’s regularly prayed for in the offerings to Lono, Hawaiian god of fertility, that have been revived on the island.

For Palomino, Ho‘olawa Farms’ work with the commission is an example of the spiritual aspect of her profession, the effort to use her skills so that Hawaiians can reconnect on Kaho‘olawe with the native forests that kumu (teachers) and former commission official Kalei Tsuha have called “the greater kuahu [altar] where the gods dwell.” Palomino is also proud that her work is helping to restore native Hawaiian medicinal plants and rediscover their uses. “A lot of knowledge in use many years ago has been lost, even by la‘au lapa‘au [herbalist healers], who were using new and introduced plants.” Education is a vital part of Palomino’s work in general, since “If people don’t understand what the plants are about, they won’t use them.”

Ho‘olawa works hard to bring these remarkable bearers of Maui’s most ancient past safely into the twenty-first century. The farm supports the Surfrider Foundation’s replantings of ground cover and shrubs at Ho‘okipa Beach Park. And Palomino has been hired by the State of Hawai‘i to establish a second rare-plant nursery in Upcountry Olinda. When we spoke, she and her crew were building greenhouses for the mostly rare and endangered plants that will be used by the State and the U.S. Fish & Wildlife Service. Located at 3,500 feet—a “middle-elevation nursery”—the Olinda Rare Plant Facility will be an ideal habitat for species that can’t grow at Ho‘olawa’s Ha‘iku site. And when it opens, as early as the end of this year, the Olinda nursery will house not only plants, but a snail propagation facility to help restore these rare and remarkable indigenous creatures to the wild.

And high up on the West Maui pali (cliffs), where colossal new turbines spin, the exposed land has been identified as an erosion threat. Palomino and her workers have begun stabilizing the pads with native ground cover so that, as the windmills point the way to what one hopes is the next wave of energy use on the island, the humblest of the island’s original plants will keep that future safely grounded.