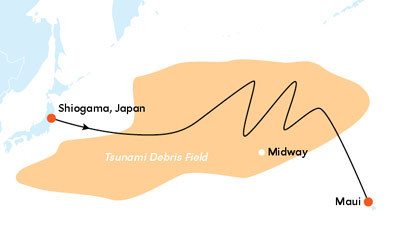 On March 11, 2011, a 9.0-magnitude earthquake off Sendai rocked the central coast of Japan, generating a massive tsunami that swept a torrent of debris into the Pacific Ocean. Over the past year, the debris has become a major source of pollution in the Pacific.

“For the first three months, the debris was visible by satellite,” explains Jeanne Gallagher, voyage crew coordinator for the Algalita Marine Research Institute, a nonprofit organization that researches plastic pollution in the Pacific. “Now it’s started to break up and disperse.”

While much of the debris has sunk, some has ridden the ocean currents to the shores of the U.S. Mainland and is projected to be on its way back to Hawai‘i. To document its progress, the institute’s research vessel, Sea Dragon, recently journeyed from Japan to the North Pacific Gyre, a confluence of ocean currents that creates a constant clockwise vortex that traps all sorts of debris. As of press time, the Sea Dragon was scheduled to return to Ma‘alaea Harbor by July 1, and receive traditional Hawaiian and Japanese welcomes from Kihei Canoe Club and the Japanese Cultural Society of Maui.

While the Sea Dragon is moored outside the harbor, representatives from the Cultural Society plan to board the vessel to examine the debris and authenticate its origin in hopes of repatriating the items. Reverend Ai Hironaka of Lahaina Hongwanji will bless the pieces before they’re removed from the ship. “It’s a necessary gesture of respect and honor for those who lost so much,” says Gallagher. “We are, after all, going through pieces of people’s lives.”

Maui Ocean Center will display the debris throughout July, along with information on the impact of ocean pollution, and winning entrees from a Maui County school art project, Debris from Our Seas. Algalita plans to share its data with the National Oceanic & Atmospheric Administration, the International Pacific Research Center and others to better understand the effects of marine debris on the Hawaiian Islands. Algalita will continue its presence on Maui, working with Maui Ocean Center and other organizations on ocean research and education about the North Pacific Gyre.