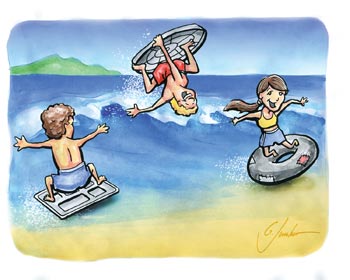 Sorting through family photos recently, I found a snapshot of my dad at twenty-one. Standing in his antique swimsuit beside a lake from which he has just emerged, he looks cold, skinny and pleased. He holds up for the camera a two-eyed swim mask.

A note on the back of the photo tells more. “Lake Mendota, Wisconsin, 1939. First pair of self-made underwater goggles [not available in stores in those days].”

By the time my brother and I came along a decade later, our dad had moved the family to Honolulu. He could now buy his underwater gear from McWayne’s Marine Supply, but he never lost his Midwestern faith in building your own.

This put him in good company in pre-Statehood Hawai‘i, where “not available in stores” applied to many things. If you wanted a skateboard, for instance, you borrowed a hacksaw and cut a metal roller skate in two. Then you’d mount the wheel pairs on either end of a narrow board.

Smart kids bolted their wheels snugly onto the board. But I was in a hurry and used the bent-nail technique. I regretted this several weeks later when my front wheels worked free midway down a steep hill. I spent the rest of that summer as a mummy.

While in traction, I had time to plan other do-it-yourself sports projects. In its wisdom, McWayne’s sold swim fins, but the boogie board was still twenty-five years off in the future. Wannabe wave riders too small to handle the heavy balsa surfboards of the day had to improvise.

Thus, on any given wave, you might see kids riding Masonite lunch trays, stubby canvas “air mats,” truck-tire inner tubes, or foam “kick boards” hand-painted with shark teeth and other fanciful designs. My board boasted a wobbly lightning bolt.

Also “not available in stores” was the sleek hydrodynamic planing device known today as the “skimboard.” I still watch in awe as young skimboarders race down the beach, skip out over the water, bank off incoming waves and surf them back up onto the sand.

Our Stone Age version of this was “sand sliding.” Our homemade boards were hewn from half-inch plywood, and the big trick was to make them spin across wet sand by kneeling and dragging one hand.

Board shapes, finishes and performance varied widely. Kids with access to radial arm saws, planers, sanders and other power tools produced virtual works of art. Their boards were smooth, beveled, symmetrical and sealed with colorful coats of slick plastic resin.

The rest of us cut the plywood crudely with handsaws, did not bevel the undersides, and disguised our ineptitude with house paint. If anything, our boards were more challenging to skim. The slightest misstep would cause the edges to dig in, pitching the rider onto packed sand. It was an aquatic variation of the mummy-maker hill.

When my brother and I were old enough to whine for our own surfboards, our dad gave us his heavy wooden paddleboard instead. Painted purple, this hollow, cigar-shaped craft stood twelve feet tall and had a cork in the tail. For steering, our dad cut two skegs from a whiskey crate and screwed them onto the boxy tail block.

Heaving this Leviathan up onto a toy wagon, my brother and I would maneuver it down to the water, clamber aboard, and paddle tandem-style into small waves. After each session, we’d stand the board up against a tree, pull the cork, and let the accumulated seawater drain out.

We were understandably stoked when Hawai‘i’s first foam surfboards became “available in stores.”