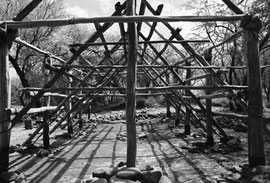 After returning to Hawai‘i from the military, Sinenci devoted himself to learning the techniques of building hale. He became a student of ethno-historian Russell Apple, the expert on Hawaiian architecture who restored Pu‘uhonua o Honaunau, formerly known as the City of Refuge, on the Big Island of Hawai‘i. Sinenci also consulted with Hawaiian historian Rudy Mitchell, an archeologist at O‘ahu’s Waimea Falls Park. Having acquired a thorough understanding of indigenous building techniques, Sinenci built what he says is the 20th century’s first traditional Hawaiian hale at the Hana Cultural Center.

Sinenci then spearheaded the Hawaiian Indigenous Architecture Task Force, which developed the standards for construction and approved materials in building a culturally correct hale. The Maui County code states, “Indigenous Hawaiian architecture structure” or “hale” means a structure that is consistent with the design, construction methods, and uses of structures built by Hawaiians in the 1800s, which uses natural materials found in the Hawaiian Islands.” Sinenci stressed the importance of retaining authenticity as much as possible; while not against modern furnishings such as tables and chairs, he believes incorporating modern structural elements—such as nails, or screens and flooring—transforms the structure into a Western house. He adds, paraphrasing Abraham Lincoln, “A house divided will fall. If we divide the hale, allowing it to be half traditional and half Western, the hale will fall; it will not be culturally correct—it will be fake.”

In 2002, the Maui County Council established codes permitting hale to be built using ancient techniques with the help of modern tools and materials, including mortar, synthetic cord for the lashing, and chainsaws to cut the logs. For fire safety, hale are not allowed to have electricity or generators. Unless the hale is located at least 100 feet from any other existing structure, the codes require the installation of automatic fire sprinklers and smoke detectors. Sinenci supports this modern-day incorporation in the hale; three of his labors-of-love have burned down.

The next step in the renaissance occurred when Sinenci designed the first contemporary curriculum for teaching the art of hale building. The Indigenous Hawaiian Architecture certification program, Hale Kahiko o Hawai‘i, is offered through Maui Community College’s continuing-education department. Departing from Hawaiian tradition, Sinenci does not believe hale-building techniques should be restricted to a select group of people.

“Ethnicity, race, and sex are not important in becoming a hale builder,” Sinenci explained.

“The desire to perpetuate the knowledge of building Hawaiian hale is.” 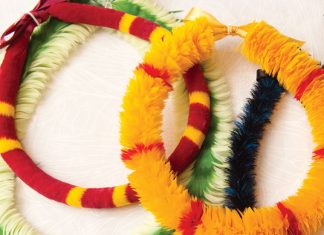